Chinese officials with the county's aerospace group said they could have their space plane up and running by 2020.

Chinese officials recently announced they'd launch their own iteration of new spacecraft by 2020. The reusable rocket would also launch and land horizontally and take off from a runway before entering orbit.

The report from the China Aerospace Science and Technology Corporation (CASTC) was initially made public by state news service Xinhua. While the reusable rocket element might seem like a SpaceX copycat, China's version is distinct in its own right.

CASTC officials pointed out that the craft is first off called a space plane, not a space rocket. Hence, the two should fly and handle very differently.

"Currently, China is developing its own reusable earth-to-orbit space vehicles that can take off and land horizontally," Liu Shiquan, China Aerospace Science & Industry Corporation vice director, previously said in June, speaking to the press during the Global Space Exploration Conference in Beijing. "We have already finished several crucial ground tests for engines and [other key components], yielding remarkable achievements."

Rumors have swirled that China would invest in a spaceplane for more than a decade. However, so few information exists about it. CASTC researcher Chen Hongbo described the rocket's launch as a spacecraft that "will fly into the sky like an aircraft." Chen also noted that the technology would allow for simpler launches with an increasingly frequent set of launches. (However, it remains to be seen if China can perfect cyclical launches like Elon Musk and the SpaceX team did earlier this year.)

China's usage of a horizontal space launch isn't novel. NASA originally wanted space shuttles launched in the 1970s to be launched in that way. Virgin Galactic also has SpaceShipTwo which is made specifically for suborbital flights. If China manages to successfully launch and safely land a horizontal craft, they will be the first in the world to do so.

The potential for low-cost reusable rockets would change the game for the aerospace industry. SpaceX has reported that its rockets give users a 30 percent increase in the Falcon's budget. However, some government officials elsewhere in the world correlate that to a lower threshold for weaponizing space equipment. 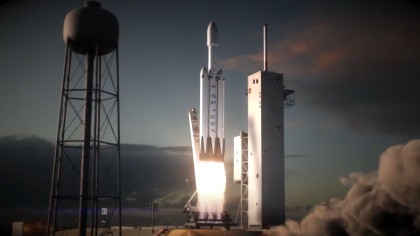 SpaceX's Biggest Rocket Yet Finally Gets a Launch Date

"We don’t have the oversight in place yet to manage a massively growing space industry," said Todd Harrison, a defense budget analyst at the Center for Strategic and International Studies in Washington, DC. Harrison served as a lead author of a new report on low-cost space access (pdf) and he's in the US military. "The US government could be caught flat-footed in a lot of this, create a big space traffic management issue that could affect the military."

Other officials expounded on their hesitancy.

“It’s going to vary a lot from country to country—the Europeans, the US, I would expect, are going to call for controls or not doing this kind of thing, not breaking the norms [against militarizing space]," said Andrew Hunter, a former Department of Defense official in an interview with Quartz. “If it’s Russia or China, if it’s to their strategic advantage to do something like this, I don’t know why they wouldn’t do this.”