China is said to be designing a nuclear submarine run by artificial intelligence which has the skills of thinking for itself and can help free up the commanding officers.

China is working on a project to update the old computer systems on nuclear submarines with artificial intelligence to enhance the potential thinking skills of commanding officers and reduce the chance of mistakes, a scientist involved with the project said.

The researcher said the plan would help promote China's navy in battles under the sea, and would help carry AI technology’s potential to the next level, local media reported.

The "machine learning" process means the computer running the nuclear submarine would be able to work without any human involvement, receiving knowledge, building on its skills and developing new battle strategies.

Until recently, big decisions such as detecting objects underwater and answering signals picked up by sonar have been carried out by human naval personnel on nuclear subs.

However Chinese scientists now believe artificial intelligence is at such a stage that it could replace most of the human decisions.

The system can process large amounts of data by mimicking the workings of the human brain. It can also recognize and identify threats from enemies faster and more accurately than human crew.

On a nuclear submarine, data could come from the Chinese navy’s observation networks, the submarine’s own sensors or daily interactions with the crew. A neural network reinforces machine learning. The structure establishes a decision support system which can improve skills, get knowledge and develop a new strategy without human intervention. 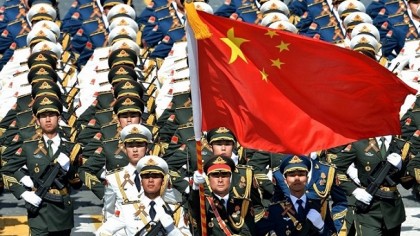 AI system is designed to be simple and compact, so that there will be minimal risk of failing at crucial moments in war.

An artificial intelligence assistant could support commanding officers by evaluating the environment of the battlefield, providing information on the saline levels in the ocean and how the water temperature may affect sonar systems’ accuracy.

Artificial intelligence could assist commanding officers to estimate the risks and advantages of certain battle moves. It could also suggest moves which were not considered by the captain.

AI can also recognize and identify threats from an enemy faster and better than human operators.

Chinese military will not cut down submarine crew size

The country’s military is said to desire the new AI technology to deliver on certain basic demands. One of the priorities is to ensure the system can follow and understand sophisticated and fluctuating underwater operations. It must also be compatible with the submarines’ existing computer systems.

But the Chinese military does not have any immediate plans to cut down the size of submarine crews when the AI technology is ready for installment. “There must be a human hand on every critical post. This is for safety redundancy,” local media reported the researcher as saying.

As military tensions between China and the US grow in the region, the Chinese government is said to be investing heavily in the project.

However replacing humans with AI in battle could pose some dangers, according to experts, who warn, that if the system can think for itself, it could result in a runaway submarine with nuclear arsenals that could be used for destruction. Experts point out that this is an issue worth considering when introducing AI to a submarine.

Why some physicists think we're building computers wrong for A.I.