China’s Chang’e-4 lunar lander woke up on the dark side of the moon this week to find temperatures more frigid than expected.

New observations from the Chang'e-4, the Chinese lunar lander which successfully landed on the far side of the moon last month, show that nighttime temperatures on the far side are much colder than originally thought.

The temperature of the moon’s surface plunged to -310 degrees Fahrenheit (-190 degrees Celsius) during the first two-week-long lunar night that the Chinese lunar lander has experienced.

This is much colder than temperatures recorded by previous missions to the moon by the United States, which were limited to the moon’s near side.

The difference in temperature is, “probably due to the difference in lunar soil composition between the two sides of the moon,” Zhang He, the executive director of the Chang’e-4 mission, told China’s Xinhua news agency.

Exploring the Hidden Side of the Moon

The moon is tidally locked in its orbit around the Earth, meaning that it does not spin on its axis the way the Earth does, creating typical day-night cycles. Instead, the same side of the moon always faces Earth, and the far side has been hidden from view for all of human history.

It wasn’t until Apollo 8 astronauts Frank Borman, Jim Lovell, and Bill Anders orbited the moon in September 1968 that any human had ever laid eyes on it.

We have since taken pictures of the far side with the lunar orbiter, giving humans the first clear look at it in its entirety, but China’s Chang’e-4 lander isn’t there for sightseeing.

The mission of China’s lunar lander is to study the cosmic radiation, the moon’s environment, and the interaction between the moon’s surface and the solar wind, the charged particles blown out into space by the Sun.

The Bridge of Magpies

The challenge of landing a probe on the far side of the moon and the subsequent communications back to earth have proven a considerable challenge for engineers. 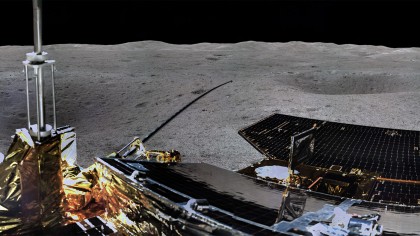 The far side of the moon is completely cut off from radio communication from the Earth since it has the entire moon between it and Earth-based transmitters, and it always will. This makes coordinating and communicating any activity on the far side tricky.

Queqiao is Chinese for “bridge of magpies” and is a reference to the Chinese folktale where “magpies form a bridge with their wings on the seventh night of the seventh month of the lunar calendar to enable Zhi Nu, the seventh daughter of the goddess of heaven, to cross and meet her beloved husband, separated from her by the Milky Way.”

How Trains Are Expected to Improve Over the Next Decade