The Chinese Space Agency has released its first panoramic image from the Moon where it landed earlier this month.

The Chinese spacecraft Chang'e-4 landed successfully on the far side of the Moon, on January 3 and it has just released its first panoramic image of the never-before-explored lunar landscape.

The image shows parts of the lander and its robotic rover as well as the pitted surface of the Von Kármán crater where it landed. The Chinese mission was to land on the side of the moon that is never seen from earth due to the moon rotation, a phenomenon called ‘tidal locking’.

The rover has woken from its standby period and now ready to explore. The rover was put into a standby mode to protect it from rising temperatures as the sun rose to its highest point over its landing site.

Temperatures were expected to reach up to 200 degrees Celsius, but authorities from the Chinese Lunar Exploration Program (CLEP) said that the Yutu 2 rover, the lander and its relay satellite all survived the heat blast safely.

This the was first image we've seen from Yutu-2, showing the Chang'e-4 lander. This was broadcast by CGTN minutes ago https://t.co/dFnR9YPxqU pic.twitter.com/gsQw8j37D8

"Researchers completed the preliminary analysis of the lunar surface topography around the landing site based on the image taken by the landing camera,” CLEP said in a statement accompanying the release of the images.

The latest images from the Chinese scientist have been color corrected to give a better idea of what it would look like if we were actually standing there. Its first unprocessed images made the moon look quite reddish, but the familiar gray of the moon is clearly seen in the exciting panorama shot.

Chang'e-4 was launched from Xichang Satellite Launch Centre in China on 7 December. It touched down at 10:26 Beijing time (02:26 GMT) on 3 January. This is the first mission ever that aims to explore the Moon's far side from the surface.

Despite being known as the ‘dark’ side, the non-visible side of the moon receives just as much daylight as the earth facing side. Instruments on the lander and rover will study the mineral composition and shallow lunar surface structure of the area as well as perform low-frequency radio astronomical observation. 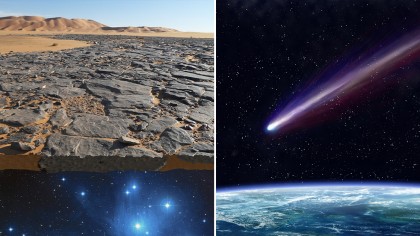 The moon's surface on this side is thicker and more pitted than the familiar earth facing side.

Radiation Levels on the Moon Are Alarmingly High, First Ever Measurements Reveal