There were over 11 million flights and 4 million train trips blocked thanks to China's social credit blacklists, according to recent reports.

The April reports were published in a recent issue of China's state-run news outlet the Global Times.

While it sounds eerily similar to a particular episode of Netflix's Black Mirror, this particular social credit system works as a series of blacklists of various levels. Each list stems from a particular offense, including anything from public misbehavior, not heeding a court ruling, and crimes like petty theft. The credit system and that large network of lists determine exactly how citizens are restricted -- inflicting things like significantly slower internet speeds and denying loans.

The report mentioned by Global Times doesn't identify which list (or lists) have spurred such a heavy travel ban.

Certain Chinese officials have also voiced that the social credit system doesn't do enough. A former official named Hou Yunchun is one such official.

"If we don't increase the cost of being discredited, we are encouraging discredited people to keep at it," Hou reportedly said. "That destroys the whole standard."

The planes and railways don't specifically correspond to a known blacklist. However, Business Insider reported it could involve debtors in order to ensure that those owing the government don't flee their responsibilities.

That particular list has been around since late 2013 with over 30,000 names within two weeks. By December 2017, there have been over 8.8 million debtors added to that list, Business Insider noted. Those 8.8 million debtors have been restricted from some 8.7 million flights and 3.4 million high-speed railway trips.

For government officials, it's a growing lesson in the power of Chinese law.

"Discredited people deserve legal consequences," Zhi said. "This is definitely a step in the right direction to building a society with credibility."

New Social Credit System and Rankings on the Way

It's important to note this version of the social credit system is not the same as the proposed ranking and scoring system the Chinese government proposed several months ago. That system is set to be implemented by 2020, and unlike the series of blacklists, this version would score citizens based on their daily interactions and financial choices (i.e. spending habits or whether they're in debt). 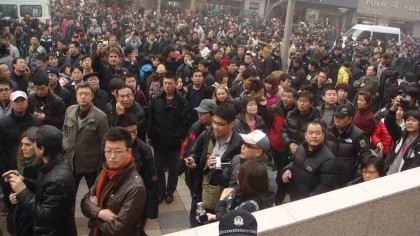 China Is Set to Implement a System of Ranking Its Citizens

Neither of the ranking systems have done extensively well on an international stage of opinion. Anurag Lal served as a Director of the US National Broadband Task Force for the FCC under the Obama administration.

“China’s proposed social score is an absolute reaffirmation of China continuing to push forward to be a complete police state," Lal said. "They take it a step further by becoming not only an establishment of a totalitarian police state that monitors its people but one that completely evades users’ privacy. All forms of activity and interactions, online or otherwise, will be rated, available to view and stored as data.”