China is developing carrier-based manned aircraft that can co-pilot drones.

This month, the Global Times reported that China’s military is seeking to equip its carrier-based manned aircraft with drones using advanced technology such as artificial intelligence (AI). The move is said to be an attempt by China to compete with the United States’ unmanned aerial vehicle (UAV) operations.

Chief engineer of China Aerospace Science and Technology Corp (CASC)'s  Shi Wen told a press conference in Beijing this month that the new program is making “efforts to promote artificial intelligence for UAVs to allow manned aircraft to co-pilot UAVs.” Shi's team is working on a series of UAVs to be deployed in both surveillance and attack missions.

The team has been working on the Caihong (CH) series of drones, such as the CH-3, CH-4 and the CH-5, dubbed the killer drone. "On average, every CH-series drone has a flying time of more than 1,200 around the world every year, so we have a huge database to support AI technology research," Wen said.

The CH series was also likely chosen due to CH-5’s reported ability to link up to other drones. “Another advantage is that the CH-5 is capable of making a joint strike together with its predecessors, the CH-3 and CH-4, because they can share the same data link and control system. Therefore, it is very easy for current users of the CH-3 and CH-4 to introduce and integrate the CH-5 into their drone network,” Shi said in November 2016.

The program is said to be China's version of the US Navy’s Unmanned Carrier Launched Airborne Surveillance and Strike (UCLASS). Last February, the Pentagon gave orders to retool UCLASS as “primarily a carrier-based unmanned aerial refueling platform.”

Legitimate competition for the US Navy

Speaking on these developments, Director of the technology and national security program at the Center for a New American Security Paul Scharre told Newsweek that, when it comes to technology, the Chinese military "are very aggressive in experiments of how they want to use it.” “It’s not surprising to see [China] lean into this, and I wouldn’t be surprised to see them actually doing some of the implementation sooner than some Western countries,” Scharre added. 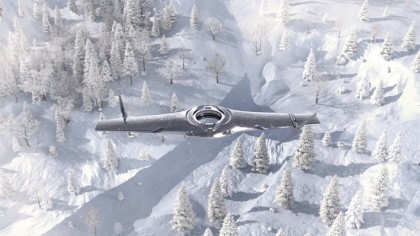 Scharre may be proven right as Beijing-based naval expert Li Jie told the Global Times that China’s plans for an UAV equipped aircraft carrier are underway. "Although the military has not released any information, research into carrier-based UAVs started long ago, and ship-based UAVs on destroyers and frigates have already been used in training," Jie said.

China’s military is already successfully launching an even more advanced drone than its already impressive CH-5. "A new generation CH series UAVs, the CH-X will be displayed at Airshow China 2018 in Zhuhai this year," Shi said.

Last week, Japan's Defense Ministry reported a drone believed to have come from China had been spotted near the Senkaku Islands, the Japanese controlled islands that China makes claims to. Authorities claimed the drone was potentially the Chinese BZK-005.