The world’s first 18-qubit entanglement was demonstrated by a team of Chinese scientists.

A team of Chinese scientists has demonstrated the world’s first 18-qubit entanglement. A qubit or quantum bit is the basic unit of quantum information.

It is the quantum counterpart to the classical binary bit. Qubit entanglement is a feature of qubits that differentiates quantum computers from classical computers.

Entangled qubits can display high-level correlation regardless of their locations, which allows quantum computers to complete tasks that classical computers are unable to do. Increasing the number of entangled particles is an important milestone for quantum information processing.

The breakthrough has been published in a recent issue of Physical Review Letters by the physicists, Xi-Lin Wang and coauthors at the University of Science and Technology of China. "Our paper reports 18-qubit entanglement that expands an effective Hilbert space to 262,144 dimensions (the largest so far) with full control of three degrees of freedom of six individual photons, including their paths, polarization, and orbital angular momentum," told coauthor Chao-Yang Lu.

"This represents the largest entanglement so far. Entangling an increasingly large number of qubits not only is of fundamental interest (i.e., pushing the physical limit, if there is one, in order to explore the boundary between quantum and classical, for example). But also, probably more importantly, entangling large numbers of qubits is the central task in quantum computation."

There are generally two ways to increase the number of effective qubits in an entangled state. The first is to use more particles, the second is to exploit the particles' additional degrees of freedom (DoFs).

Going beyond two DoFs presents huge technological challenges, but in this case, the physicists were able to generate scalable hyper-entanglement, producing an 18-qubit entangled state made from six photons with three DoFs.

"Controlling multiple DoFs is tricky, as it is necessary to touch one without disturbing any other," Lu explained. "To solve this, we develop methods for reversible quantum logic operations between the photon's different DoFs with precision and efficiencies both close to unity.

"We believe that our work creates a new and versatile platform for multi-photon quantum information processing with multiple DoFs." 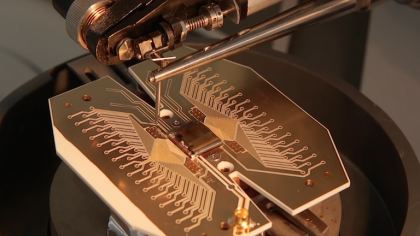 "Our work has created a new platform for optical quantum information processing with multiple DoFs," Lu said. "The ability to coherently control 18 qubits enables experimental access to previously unexplored regimes, for example, the realization of the surface code and the Raussendorf-Harrington-Goyal code for quantum error correction, and the teleportation of three DoFs of a single photon."

Physicists figured out how launching a Falcon 9 changes the atmosphere