After months of waiting, China's first space station is no more.

It's official: the Chinese space station Tiangong-1 is gone.

The Chinese prototype space station whose name translates as "Heavenly Palace 1" burned up during its re-entry into Earth's atmosphere over the southern Pacific Ocean at around 8:16 p.m. EDT (or 0016 April 2 GMT).

The U.S. Air Force wrote a statement regarding the fall and confirmed that Tiangong-1 was no more. 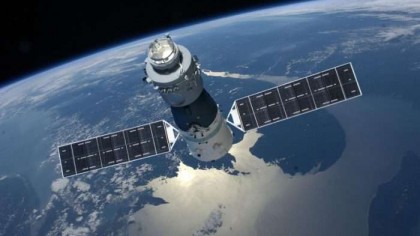 The "palace" was originally the size of an average school bus, so researchers from both the ESA and NASA have said that pieces of the craft made it to earth's surface. However, the general warning from all space groups has been clear: Do not touch anything that you suspect fell from the ship. The space debris could easily be contaminated with a toxic rocket fuel called hydrazine.

Throughout its descent, Twitter users kept track of Tiangong-1's location. A few even cracked jokes about the odd variety of confirmed citings.

At this point we can refer to #Tiangong1 as “Schrodinger’s Space Station.” Since nobody knows whether it’s up or not at this point, it has entered a superposition only resolves when someone puts eyeballs or radar on it.

One of the most contested issues about the Tiangong-1's descent was whether or not the space station was actually "controlled" as it fell. Dean Cheng serves as senior research fellow at the Heritage Foundation and he's an expert on China's space program.

"The Chinese insist that it is controlled," Cheng told Space.com. "They're very, very unhappy when you use this term 'uncontrolled.'"

Tiangong-1 is also not the first space station to fall from the sky; the Soviet Mir space station had a controlled landing in the Pacific Ocean in March 2001. (Mir also takes the record for the largest controlled spacecraft to fall from the sky and back to Earth.) The debate, however, rests in the definition of "controlled." Other countries with space programs such as Russia and the United States both define controlled re-entry as those performed under strict guidance of the space program. With regard to Tiangong-1, it's clear no one really knew where it would wind up -- not even those who launched it into orbit.

"We should be diplomatically, and in the space-policy world, pushing China to accept a definition of 'control' that is comparable to that of the rest of the rules-based world. You don't get your own definition," Cheng said. "To support that, there need to be some sticks here," he added, referring to consequences.

Tiangong-2 went into orbit in September 2016, and given the successes it's had, the Chinese space program want to build up a permanent space station. The country said it could have crewed missions to the station as early as 2022.