A vehicle by Chinese Tesla rival NIO suffered an embarrassing software bug in the middle of one of China's most famous streets.

In an embarrassing incident last week, NIO, a Chinese electric vehicle start-up with the stated goal of rivaling Elon Musk's Tesla in Asia, saw one of its smart car models fail, in a truly slapstick fashion and in the broadest daylight imaginable.

According to NIO, the driver initiated a software update while the car was stopped due to Beijing's notorious traffic and proceeded to make things much, much worse by inadvertently shutting down the vehicle on of the busiest streets in the country. Then, the system update shut down the software functionality of the vehicle, which, like most modern cars, controls everything from the steering to the door locks.

That last part is key, as the doors could only be unlocked electronically. The occupants had no choice but to go viral by sitting it out on Changan Avenue while the car spent over an hour updating its systems.

Bold as Brass on Changan Avenue

Changan Avenue is a 2.4-mile long thoroughfare that passes through some of the most important government and Communist Party buildings in the country. The avenue is adjacent to Tiananmen Square, which houses the National People’s Congress, the central bank of China, and the Communist Party’s central headquarters, Zhongnanhai, and passes between it and the Forbidden City, the seat of Chinese Imperial Dynasties going back thousands of years.

While on this most-conspicuous of roads, the driver, who was test driving the vehicle as a potential buyer, “accidentally” took a series of actions that initiated the software update while waiting in traffic. 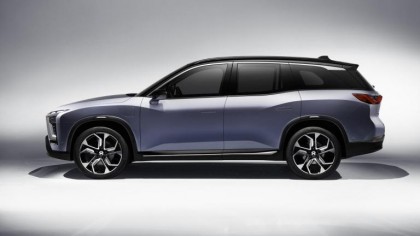 According to one social media report, the software update requires 5 steps and 2 separate confirmations to initiate. A spokesman for the company wrote to The Verge and said, "before users start to upgrade the software, they receive a clear notice explaining that users need to park their cars during the upgrading and the car’s relevant functionalities will be shut down. The upgrade takes several steps, including entering the password and confirmation. The user tried to engage the upgrade while she was caught in a traffic jam."

Changan Avenue naturally has tight traffic restrictions and a heavy security presence, so the inert vehicle soon drew the attention of police on the scene.

According to a post on China’s social media platform Weibo, the NIO representative in the car with the potential buyer wrote, “[s]o there we were, parked in Changan Avenue, motionless yet bold as brass. Police officers came, one group after another, yet we could not even wind the window down.”

“If this is what a smart [car] looks like, I’d rather not [be] smart,” said a Weibo user in response to the news; and they were not alone. Over the weekend, there has been no shortage of mockery and disbelief on social media, which has seen a contentious debate spring up over who was at fault for the incident.

Many were quick to point out that a software system that doesn’t anticipate an attempted software update while the car is operating on the road is a flawed system.

“This is very serious," one user wrote. "Any relevant staff such as an engineer or project manager with awareness of customer experience would have prevented this.”

Others sprang to the defense of the company, with one exasperated user laying the blame squarely on the driver.

After pointing out the multiple warnings and confirmations a user needs to go through to initiate a software update, they finish by demanding to know "what does [NIO] need to do for everyone to be satisfied?"

A Stalled Vehicle or a Bump in the Road for NIO?

The incident has taken some of the shine off of NIO's recent positive press.

The Shanghai-based company ended their 2018 fiscal year in good shape, reporting $420 million in revenue and raising $1.15 billion in its successful IPO on the New York Stock Exchange in September 2018. Sales have been solid and they have benefitted from the 25% tariff levied against Tesla in response to US President Donald Trump's tariffs on Chinese exports.

Still, Li knows that Tesla isn't going anywhere and that NIO will need to compete with them for the fast-growing electric vehicle market in China on their own terms. There's only so much help tariffs can provide against a competitor like Tesla.

"We still have a lot to learn from Tesla since it has a longer history and is a leader in the electric vehicle segment,” said Li. “But we also have our own advantages such as our customer service model and battery swap system."

Being a domestic producer with a lower cost and therefore lower retail price certainly doesn't hurt either.

The Long Road Ahead To Electric Vehicle Dominance

While such a high-visibility failure of its software system no doubt stung the pride of the company, NIO has been holding its own against Tesla for China's electric automobile market, the largest in the world.

The Tesla Model S 75D, meanwhile, recently retailed as high as $110,000 as a result of import costs and tariffs. Even without the tariffs, Tesla is at a distinct pricing disadvantage.

This has only helped NIO’s sales and hurt Tesla's. Trade war tensions between the US and China are blamed for the sharp drop in Tesla sales, which may have fallen 70% over last years after imported cars were hit with a 25% tariff.

NIO, meanwhile, sold more than 2,000 ES8 models in October 2018, while Tesla reportedly only sold 211 cars that same month, according to the China Passenger Car Association.

Tesla disputes these numbers, but hasn’t provided its own data, and they are planning on opening a production factory in Shanghai with an annual capacity of 500,000 units in the hopes to bring their product to the Chinese market at a lower price point, something they seem to be particularly concerned about.

When Beijing lowered the tariff on imported automobiles from the United States at the end of last year, Tesla announced that they would cut the price of their vehicles in China by substantially, their 3rd price cut of the year.

The price sensitivity of Tesla's vehicles only underscores what is growing into one of the most important business competitions in the world. Even though the overall auto market in China is expected to see a decline in sales in 2019, the electric vehicle market is the exception.

In the first 10 months of 2018, over 860,000 electric vehicles had been sold, a 75.6% increase over the same period in 2017. With all that potential, it's easy to see why Li is optimistic about the future of NIO and why Tesla is eager to get into the market as fast as they can, however they can.

"I am still bullish about China’s auto market, particularly in the electric vehicle segment, since it is the new growth driver here,” Li said. “[NIO] will continue to focus on building high-performance, high-end EVs to chase further growth."

With the wind at their backs, NIO is well positioned to actually compete with Tesla for the Chinese auto market, building up the David and Goliath nature of the contest in the public imagination; once they work out all the bugs.