The Clifton Suspension Bridge is an icon of the City of Bristol, England and it recently celebrated its 150th Birthday. It spans the beautiful and picturesque Avon Gorge and connects Bristol with North Somerset. The structure is a Grade I listed structure and attracts visitors from across the world every year. Today the bridge's upkeep is entirely funded by tolls, a practice that hasn't changed since it opened to the public in 1864. The bridge is manned and open 24 hours a day, 7 days a week all year round.

In 1829 a competition was held to find a suitable design for the Clifton Suspension Bridge. No suitable plan could be found and a second competition was held. This was won by the 23-year old Isambard Kingdom Brunel who was later appointed as the project engineer. The bridge was originally designed for horse-drawn traffic but today it serves more than four million vehicles each year. In the following article, we'll take a quick tour of the bridge and its history. 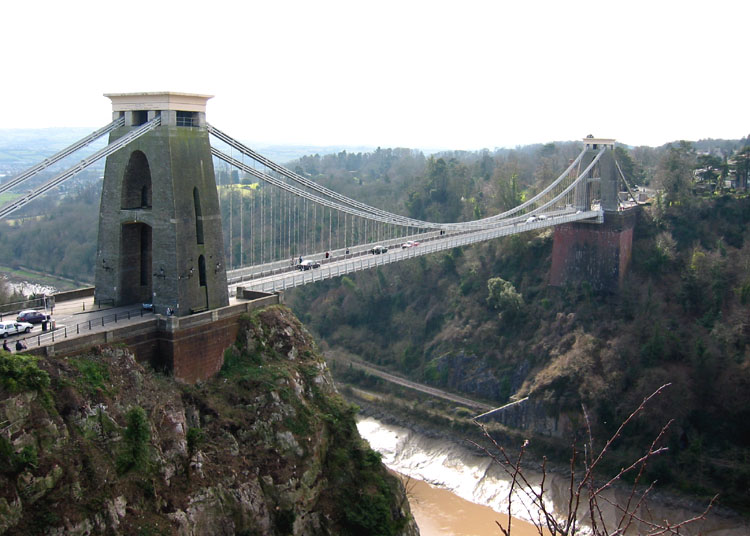 In local folklore and myth, the first rope was carried across the gorge using a kite. Other stories reveal it was actually a bow and arrow. But the most likely scenario was that hemp ropes were carried down the gorge and moved across the river by boat, then pulled up to the other side. The myth stories are a lot more poetic, so why not go with those? These ropes were used to haul six wire cables across the gorge. Once secured they were planked across them and bound with iron hoops to make a footway.

Two additional cables were added to make handrails with another cable at head height with a "traveler" running along. This was used to carry each link of the chain out to the center. The chains were salvaged from the Hungerford suspension bridge which was demolished in 1860. The walkway had a dual purpose of acting as a staging area to add each link of the chains for the bridge. To provide stability during high winds this temporary bridge was anchored to the rocks below. The bridge's chains that they consist of three chains stacked on top of one another. These were built sequentially from the bottom upwards. Once the chains were completed vertical suspension rods were fastened to the chains by bolts that linked the chain together.

Two enormous girders run the full length of the bridge which are visible today as the division between the footway and the road. During construction two long-jibbed cranes were used to move 5 meter long sections of the girders into place. These were then attached to the suspension rods. Cross girders were attached underneath to form a rigid structure. Once in place, the floor of the roadway was put in place using Baltic pine timber sleepers.

The chains and rods are modes from wrought iron. The towers, or piers, are built mainly of local Pennant stone. The south pier, Leigh Woods, stands on an abutment of red sandstone. Each of the bridge deck sleepers is 12 cm thick and are overlaid by planking 5 cm thick. Asphalt was added to the deck surface in 1897. In 1867, William Barlow, one of the contracting engineers stated that during the construction two deaths were reported.

The bridge has a total span of 414 meters from anchorage to anchorage. The Clifton Suspension Bridge's span is 214 meters. It has an overall width of 9.5 meters. The bridge's deck sits 76 meters above water level and the piers are 26.2 meters tall. The bridge's saddles are 22.3 meters high and the dip of the chains is 21.3 meters. The total bridge weighs in at around 1,500 tons.

The bridge was completed five years after the death of its creator Isambard Kingdom Brunel and opened on the 8th December 1864. He described the bridge as "my first love, my darling". The total construction time was around 33 years. The Clifton Suspension Bridge was initially funded by William Vick, a wine merchant, in 1754. He left around £1,000 in his will to build a bridge that was supposed to be toll-free across the Avon Gorge.  Sorry, William.

Brunel's original plans were for both towers to have an Egyptian style. “They were going to be decorated with iron panels showing the story of the bridge being built, and each one would have had two sphinxes sitting on top,” Laura Hilton from Clifton Suspension Bridge said during an interview with BBC News. "When they started building they realized it was never going to be possible to put the decoration on, and Brunel redesigned the bridge in a plain format.”

After Brunel's untimely death in 1859, the Institute of Civil Engineers raised funds to complete the project. Work resumed in 1862 and the design was amended by widening the roadway and increasing the number of suspension chains from two to three. The Clifton Suspension Bridge is held up by 3,500 load bearing bolts and chains that stretch 32 kilometers underground. An estimated 150,000 people packed the streets of Bristol to mark its opening in 1864. Daredevil pilots would occasionally fly bi-planes underneath the bridge until the advent of faster planes when the practice became too dangerous.

The Clifton Suspension Bridge was the brainchild of none other than Isambard Kingdom Brunel. At the tender age of 23, his ambitious plans for the bridge were accepted and construction began.  Using recycled materials and a typically Victorian taste for monumental design the final bridge is a thing of beauty. It is almost the perfect symbiosis of man's ingenuity and nature and the bridge certainly doesn't destroy the natural beauty of the valley. Although Brunel never lived long enough to see its construction we are sure he would have approved of the "small" amendments to his brainchild. The bridge is today a national treasure and great feat of engineering worthy of Brunel's legacy.

So there you go, have you ever crossed the bridge? Or like me often bypassed it because you never have loose change to hand (though it may take card payment now)?