In February 2015, the National Academy of Sciences (NAS) announced that man-made climate change has now advanced so rapidly that options for planetary-scale intervention, in other words ‘geoengineering’, must be considered. The problem of how to solve man-made climate change has now become so serious that numerous voices around the world are starting to mention geoengineering as a possible solution. However, geoengineering approaches remain largely untested and are therefore potentially very risky, with a distinct possibility of creating more problems than they solve. 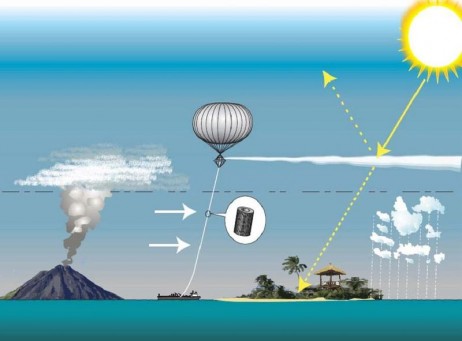 The schematic for a geoengineering experiment that took place in Norfolk in 2011 [Image source: SPICE Geoengineering, Flickr]

For example, one of the techniques most commonly proposed whenever the subject is discussed, is solar radiation management (SRM), more often termed ‘albedo modification’ because it is based on the ‘albedo effect’, that is to say the idea of reflecting solar radiation back into space. However, the concept is fraught with potential problems, particularly the risk that SRM technologies could potentially alter the climate in new ways which are not currently understood and which would have a permanent damaging effect.

One proposed SRM technique involves the injection of sulphate aerosols into the stratosphere in order to create a global dimming effect. This idea involves the delivery of chemicals such as sulphuric acid, hydrogen sulphide or sulphur dioxide into the atmosphere by artillery, aircraft or balloons. The idea is appealing because it seems to offer rapid results, low direct implementation costs and with reversible climatic effects. A study by T. M. L. Wigley in 2006 proposed the injection of sulphate particles into the atmosphere every 1-4 years, delivering an amount of sulphate equal to that injected by the eruption of Mount Pinatubo in 1991. The study concluded that, if successful, the technique could offer a ‘grace period’ of about 20 years before major emissions cutbacks would be required. However, the study didn’t address the many technical and political challenges such a project would have to overcome.

The proponents of sulphate aerosol delivery argue that this approach mimics natural processes, particularly those of volcanoes, that it could be technically feasible, could have a high ‘radiative forcing potential’ (that is to say it could be very effective in putting a brake on climate change) and be able to do so at relatively low cost. However, the potential side-effects of this approach, should it go drastically wrong, include ozone depletion, the warming of the tropopause (the boundary between the troposphere and the stratosphere) and potential impacts on the temperature of the stratosphere.

Another study, published in Environmental Research Letters, suggests that stratospheric sulphate aerosols could cause major droughts in the tropics with reductions in rainfall of up to one-third in South America, Asia and Africa. This in turn would lead to crop failure and famine and could also potentially cause new conflicts between countries over who has the right to interfere in the Earth’s atmosphere.

Another approach, alongside SRM, is carbon dioxide removal. This includes such techniques as bioenergy with carbon capture and storage, biochar, direct air capture, ocean fertilisation and enhanced weathering. 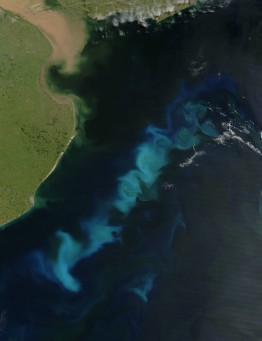 An oceanic phytoplankton bloom in the South Atlantic. Oceanic iron fertilization would attempt to replicate such blooms by adding iron, thereby drawing down carbon and fixing it on the seabed [Image source: Wikimedia Commons]

Iron fertilization of the oceans has been suggested as a means of encouraging the growth of phytoplankton which would in turn absorb carbon dioxide from the atmosphere. However, the amount of carbon removed from the atmosphere may be much lower than predicted given that dead plankton would release the carbon back into the atmosphere. Furthermore, the potential environmental impacts of this technique are poorly understood, although it is known that they would not be restricted to a particular area but would affect other areas of the ocean due to the action of global oceanic circulation. This in turn would make long-term assessment of the technique extremely difficult. Despite this, several ocean iron fertilization projects have already taken place.

One of these, conducted off the coast of western Canada in July 2012, caused an uproar among local indigenous communities and enraging scientists and opponents of geoengineering. Part of the problem was that it was carried out by a private company, the Haida Salmon Restoration Corporation (HSRC), rather than by scientists. The project was legally dubious, particularly given that ocean fertilization is restricted by a voluntary international moratorium on geo­engineering and a treaty on ocean pollution. These two agreements do allow exemptions for research but the treaty stipulates that such experiments must be regulated by national environment agencies and require a permit. It is not clear whether this experiment had any effect, but what it did do was trigger a huge debate about geoengineering, who should conduct research in this area and how it should be properly defined.

Another proposal for dumping stuff in the oceans suggests the use of lime, which would react with atmospheric CO2, turning to calcium carbonate and falling to the ocean floor. This idea, termed Cquestrate, was presented at a conference on climate change solutions in Manchester, UK, in 2009, by former management consultant Tim Kruger. Aside from the issue of how to transport the lime in sufficient quantities, dumping lime into the sea is currently illegal. Kruger also admits that in order to counter global emissions, the project would have to mine and process 10 cubic kilometers of limestone per year. Furthermore, it would only be worth attempting if the CO2 generated by the lime production could be captured and buried.

These proposals are only some of the geoengineering ideas that have been presented in recent decades, there are many more, but they are all mired in controversy of some form or another. Furthermore, global organisations involved in researching climate change have given geoengineering a fairly lukewarm reception, at best, thus far.

For example, the Intergovernmental Panel on Climate Change (IPCC) has concluded that it would fail to counter all the effects of climate change. Other organisations such as the National Academy of Sciences, the Royal Society and the Institute of Mechanical Engineers have all come to similar conclusions, agreeing that geoengineering can only be, at best, a complement to existing emissions reductions strategies, and at worst, potentially dangerous. 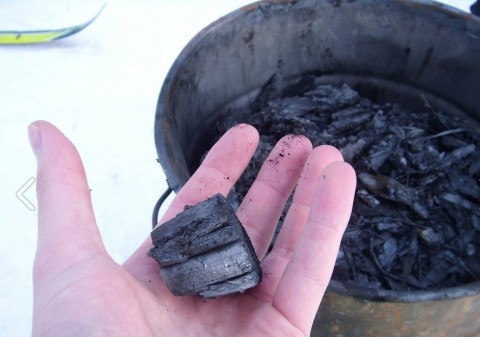 Creation of Biochar through the pyrolysis process as a means of storing carbon [Image source: Wikimedia Commons]

None of the geoengineering approaches proposed so far can be guaranteed to be entirely safe. They would also have to be implemented at large scale with the least costly proposals potentially costing tens of billions of US dollars per year. Even considering the potential benefits, scientists generally agree that a geoengineering approach is no substitute for climate change mitigation.

Unsurprisingly, environmental groups, such as Friends of the Earth and Greenpeace, prefer more sustainable approaches such as afforestation and peatland restoration, while Oswald J. Schmitz, writing in Yale Environment 360, argues in favor of enhancing biodiversity to enable ecosystems to store carbon.

According to Schmitz, predators are key to this strategy, since they limit the amount of herbivores that would otherwise graze the ecosystems that absorb carbon. As an example, Schmitz points to the fact that in the vast boreal forest region of northern Canada and Russia, which covers more than 10 percent of the earth’s land area, most of the carbon extracted by boreal trees from the atmosphere is stored as dead leaves, branches and roots shed from plants. The cool temperature of the soil prevents microbes from breaking down organic matter, thereby returning carbon to the atmosphere, which means that boreal forests are able to store more carbon than many other places on earth and twice as much as tropical forests. Canada’s boreal forests currently remove and store enough CO2 to offset all the country’s annual carbon emissions from fossil fuel consumption, which is particularly important given that Canada is one of the top 10 emitters of carbon dioxide. This is only possible thanks to the large carnivores such as black bears and wolves, but this is being overlooked by wildlife management agencies which cull the predators because of their effect on caribou and moose populations. Estimates have shown that a rise in moose density from 0.5 to 1.5 animals per square kilometer generates a soil carbon storage reduction of 10 to 25 percent.

The more one looks at geoengineering, the more it appears to be little more than a false hope based on untested scientific theories. In contrast, more natural and sustainable approaches, such as those recommended by environmental groups along with the transformation of our energy networks, transport networks and a complete turnaround in the way we do things and lead our lives, seems to be the more realistic solution. However, there is a catch. Climate change appears to be getting worse with each passing year, and that means we are quickly running out of time.

In short, whatever we do from here on, we need to do it quickly.