For decades (even centuries), people across disciplines toyed with the notion that multiple universes exist. Actually, an infinite number of universes. These all exist in differing realms, differing dimensions, just out of reach of human understanding -- or so the theory goes.

The multiverse theory has its fair share (well, a lot) of skeptics. However, that's not stopping astronomers and cosmologists and physics researchers from using the multiverse to explain the inexplicable.

New research from the Royal Astronomical Society set out to find an answer to the 'Cold Spot' in the cosmos. The Cold Spot, in short, is a "cool" patch of space in the radiation throughout the universe after its formation. NASA's WMAP satellite first identified the Cold Spot in 2004. The European Space Agency's Planck mission confirmed its existence nearly 10 years later. It doesn't quite fit with the standard 'inflation' explanation of the universe, as the Guardian's Stuart Clark noted. Rather, this RAS study theorizes that the Cold Spot results from a lack of other galaxies. 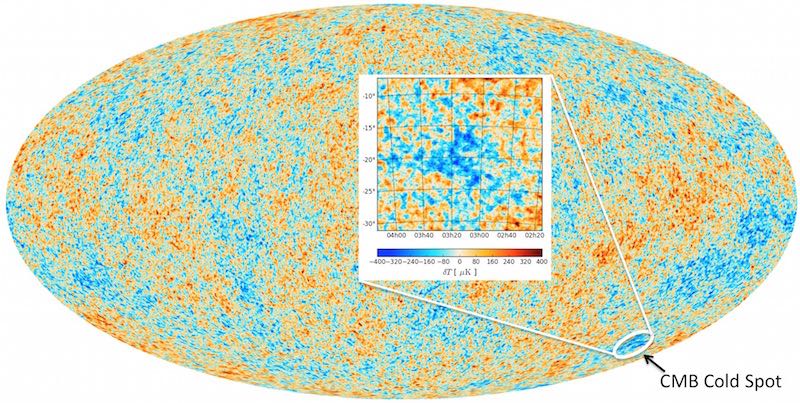 "The map of the CMB sky produced by the Planck satellite. The large area with anomalously low CMB temperature known as the CMB Cold Spot is highlighted in the inset," Durham University. [Image Source: Durham University et al.]

In essence, the Cold Spot is a gap in the multiverses.

"We can’t entirely rule out that the Spot is caused by an unlikely fluctuation explained by the standard [theory of the Big Bang]," said Tom Shanks of Durham University. "But if that isn’t the answer, then there are more exotic explanations. Perhaps the most exciting of these is that the Cold Spot was caused by a collision between our universe and another bubble universe. If further, more detailed, analysis … proves this to be the case then the Cold Spot might be taken as the first evidence for the multiverse."

The team used a survey of 7,000 galactic redshifts. Redshifts occur when more distant galaxies expand and have their light shifted into longer wavelengths. The farther away the galaxy, the higher the redshift. This allows the cosmologists to estimate distances of other galaxies. Given the extensive database and spectrograph analysis, the Durham University team noticed that no current explanation for the Cold Spot would fit with standard theories about redshifts.

The RAS said without a supervoid to explain the Cold Spot, simulations give a 1 in 50 odds that the area came out of sheer chance. 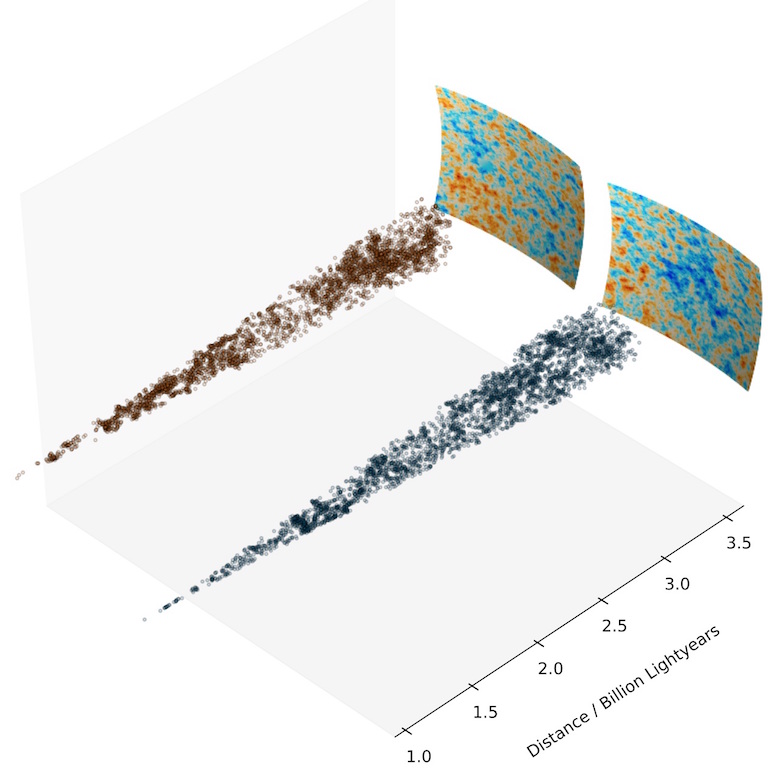 "The 3-D galaxy distribution in the foreground of the CMB Cold Spot (black points) compared to the galaxy distribution in an area with no background Cold Spot (red points). The number and size of low galaxy density regions in both areas are similar, making it hard to explain the existence of the CMB Cold Spot by the presence of voids," Durham University team. [Image Source: Durham University et al.]

"This means we can't entirely rule out that the Spot is caused by an unlikely fluctuation explained by the standard model. But if that isn't the answer, then there are more exotic explanations," Shanks told the RAS.

'Perhaps the most exciting of these is that the Cold Spot was caused by a collision between our universe and another bubble universe. If further, more detailed, analysis of CMB data proves this to be the case then the Cold Spot might be taken as the first evidence for the multiverse – and billions of other universes may exist like our own."

If the multiverse theory becomes a reality, then this would mean the end of modern physics as we've come to know it.

Physics as a branch exists to prove why the universe acts and shapes itself in a particular fashion. It develops theorems and equations to explain those fundamental pieces of our world. However, multiverses place limits on our own understandings. Different universes could exist with an entirely different set of rules. Infinite universes mean infinite possibilities for unique rules. The quest at the heart of physics would be rendered theoretically impossible.

This has led to a number of physicists, astrophysicists, and cosmologists outright rejecting the multiverse theory. However, other researchers say that lack of hard-knowledge isn't enough to dissuade talk of infinite universes.

Stanford cosmologist Andrei Linde challenged the notion that studying multiverses doesn't count as science in an interview with Space.

"...anybody disliking the theory of the multiverse should be asked to present an explanation of these observational or experimental facts in any other context, not involving a multiverse," he said. "Many people tried. Nobody succeeded. That's why we take it so seriously."

For more information, check out this video featuring physicist Michio Kaku. It's still one of the best explanations of multiverse theory to date, despite being several years old.