America's Colin O'Brady did the impossible and became the first person to journey across Antarctica alone.

You have to be crazy to even think about walking alone across Antarctica, right?

It's just kind of cold there, and that means you need just a few layers if you want to survive even a few moments ... let alone several days in the frozen tundra. 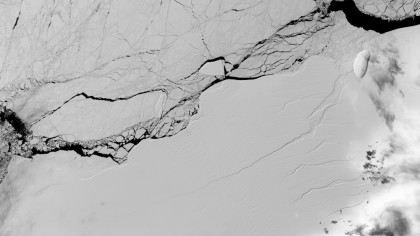 But Colin O'Brady, 33, was crazy enough to do the unthinkable. In a remarkable 54-day joruney, O'Brady became the first person to trek 930 miles across the continent without any assistance.

"32 hours and 30 minutes after leaving my last camp early Christmas morning, I covered the remaining ~80 miles in one continuous “Antarctica Ultramarathon” push to the finish line," O'Brady said on his Instagram page.

"As I pulled my sled over this invisible line, I accomplished my goal: to become the first person in history to traverse the continent of Antarctica coast to coast solo, unsupported and unaided."

O'Brady made sure he would make it to the finish line, accomplishing a goal no other person has done before.

But he wasn't the first person to make such an attempt. Britain's Henry Worsley died in 2016 while trying to make the same trip, but collapsed from exhaustion toward the end of the trek, according to USA Today.

How Did O'Brady Survive?

It's a question he's probably asking himself right about now.

O'Brady documented his entire trip on Instagram, including when he reached landmarks that barely any human beings have ever seen.

Day 42: DREAMS INTO REALITY. Even though I’m 50 miles past the South Pole now, I can’t help but post one more image from the day I arrived - a dream come true. Plus, today is a very historic date. On December 14, 1911, this day exactly 107 years ago, Amundsen became the first person to reach the South Pole. Talk about inspiration. That was a true journey into the unknown that took years and years to complete. I finished a bike ride in 2016 and got the spark of inspiration for this project. I immediately came home and wrote it all down on my whiteboard. Since that day I’ve been working everyday to turn this dream into reality; training, fundraising, researching. The key is that each day I took a step toward making my dream a reality even with countless setbacks and mistakes made along the way, I kept trying. I haven’t realized the dream yet. That’s what I’m doing every day out here...taking step after step to make it come true. Whatever you are dreaming of in life, be that in business, art, music, love, entrepreneurship, sports - it can be anything. Stop just dreaming and take the first step. As in the immortal words of Walt Disney, “If you can dream it, you can do it!!” But dreaming alone won’t get you there. If it’s going to work, action is required. #TheImpossibleFirst #BePossible Shoutout to @samuel.a.harrison for snapping this amazing shot of me. Samuel and another scientist from the South Pole station read about my journey in the @nytimes and came outside to the Pole to cheer me on!

O'Brady might have been driven by a bit of competition, too. Louis Rudd, a friend of the late Worsley, was trying to become the first person to make the unassisted journey across Antarctica at the same time.

But Rudd has yet to finish the journey. And since O'Brady understands how wild of a feat it really is, he's not heading back to America until he sees Rudd.

“It’s a small club,” Jenna Besaw, O'Brady's wife, said. “His intention is to wait for Louis and have kind of a celebratory moment with the only other person on the planet to have accomplished this same thing.”

In order to survive, he had plenty of freeze-dried foods.

DAY 9: THE NEW YORK TIMES. This photo ran in NYTimes today with a great piece “Man Against Nature, And Man” about my Impossible First project and Lou Rudd’s expedition. I have nothing but the utmost respect and empathy for anyone who sets audacious goals for themselves and takes action to achieve them. Wishing Lou a safe and successful journey. #TheImpossibleFirst #BePossible https://www.nytimes.com/2018/11/11/sports/antarctica-race.html

So, who will try to join O'Brady as the next person to journey across Antarctica?