New chemical process could open up O2 production in space.

One of the biggest challenges for deep space exploration is how to supply oxygen to astronauts. Oxygen (O2) is in short supply in space even on planets with thick atmospheres. Carrying oxygen is one option, but it requires a huge amount of fuel to move it around and the supply will always be finite.

Chemists working at Caltech may have discovered a way to produce O2 in space thanks to some inspiration from Science Fiction. Molecular oxygen is present in space in the wisps of gas streaming off comets.

Can we make O2 in space?

While scientist knew about this phenomenon for awhile they weren’t sure how it came about. That was until two years ago when Konstantinos P. Giapis, a professor of chemical engineering at Caltech, and his postdoctoral fellow Yunxi Yao, investigated the mystery eventually proposing a totally new chemical process. Giapis, along with Tom Miller, professor of chemistry, has expanded on that work to demonstrate a method for generating oxygen in space that could help humans explore the farthest corners of our universe.

But even without its cool applications, the science is important as it proposes a new kind of chemistry decorated entirely by studying comets. The research shows some chemical reactions can occur by providing kinetic energy rather than the typical heat.

This process works when tiny bullets of water are shot onto surfaces containing oxygen, such as sand or rust. In these instances, the water molecule can rip off that oxygen to produce molecular oxygen. In comets, this process happens when water molecules vaporize from the surface and are then accelerated by the solar wind until they crash back into the comet at high speed.

Comets can also emit carbon dioxide (CO2) and the two researchers wanted to see if this CO2 could also produce molecular oxygen in collisions with the comet surface. To confirm if the CO2 reaction was similar to water’s reaction Giapis and Yao designed an experiment to crash CO2 onto an inert surface, in this case gold foil. Despite the fact it should not produce molecular oxygen, O2 continued to be emitted from the gold surface. 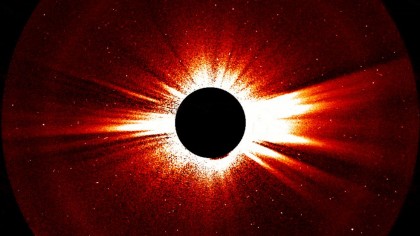 This proved to the scientists that both atoms of oxygen come from the same CO2 molecule, effectively splitting it. "At the time we thought it would be impossible to combine the two oxygen atoms of a CO2 molecule together because CO2 is a linear molecule, and you would have to bend the molecule severely for it to work," Giapis says. "You're doing something really drastic to the molecule." The two researchers then turned to Tom Miller, professor of chemistry, to help them create a model of the phenomena so they could better understand exactly what was happening.

The result was the creation of an apparatus similar to a particle accelerator, which can turn the CO2 molecules into ions by giving them a charge and then accelerating them using an electric field. The device is not necessary for the reaction to occur but can help the researchers study it. They hope that one day the reactor can be used to develop applications such as how to produce oxygen in space. Though there is a lot of work to do before then - the first steps of independent oxygen production have begun.