Over a decade after the retirement of the Concorde, some companies are working to bring back supersonic air travel.

After the retirement of the Concorde in 2003, supersonic commercial air travel came to an end. With an average speed just above Mach 2 (1,354 mph), the Concorde’s fastest Transatlantic trip between New York and London occurred in 1996, lasting just 2 hours 52 minutes and 59 seconds.

Its retirement was seen by many as a real loss even as there were serious problems with commercial supersonic air travel, primarily the noise. It was prohibited from flying at supersonic speeds over land to spare those down below from the loud sonic boom as it flew. Though a sonic boom seems like a single event, the boom itself is relative to the observer, the boom itself simply being the moment the compressed sound waves of the aircraft finally reaching the observer. Traveling over land, a supersonic aircraft is essentially raking the ground below with its sonic boom.

Thanks to new aircraft designs, there is hope that these booms can be mitigated and supersonic air travel can make a comeback, with several companies betting that it will. UK-based Reaction Engines has been working to produce an engine that they hope will be more than 250 percent faster than the ones used on the Concorde.

Recent tests on the precooler component Reaction Engines has built for its SABRE engine design have achieved air intake cooling of air up to 420 degrees Celsius (~788 degrees Fahrenheit), the air temperature experienced while traveling at Mach 3.3. They hope to get their SABRE engine precooler to the point where it can handle air temperatures in excess of the 1,000 degrees Celsius (~1,800 degrees Fahrenheit) experienced at Mach 5. 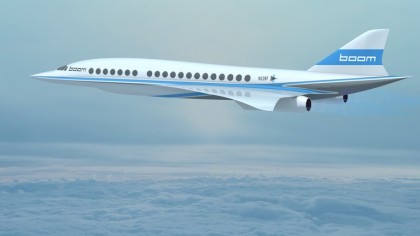 “This provides an important validation of our heat exchanger and thermal management technology portfolio which has application across emerging areas such as very high-speed flight, hybrid electric aviation and integrated vehicle thermal management.”

Testing of the precooler took place in Colorado, but after securing more than £100 million in public and private funding—including investments from BAE Systems, Rolls-Royce, and Boeing HorizonX—Reaction Engines is finishing construction of a test site in Westcott, Buckinghamshire in the UK where it will begin testing the SABRE Engine core.

Last year, Boeing unveiled a hypersonic aircraft design concept that they hope can hit Mach 5, capable of traveling around 3,806 mph at sea level. While only in the concept stage at the moment, Kevin Bowcutt, senior technical fellow and chief scientist of hypersonics at Boeing, believes that these aircraft could be in the air in the next 20 to 30 years.

“We’re excited about the potential of hypersonic technology to connect the world faster than ever before,” he said. “Boeing is building upon a foundation of six decades of work designing, developing and flying experimental hypersonic vehicles, which makes us the right company to lead the effort in bringing this technology to market in the future.”