Designer Mehmet Doruk Erdem and builder Mark Atkinson have joined forces to bring to life the BMW K75 Alpha Bullet Bike. The custom-made design is based on a Salt Flats racer concept.

The bike was custom-designed by Turkish industrial designer Mehmet Doruk Erdem. Erdem is a well-known designer who has been designing custom motorcycles for some time now. He is famous for his attention to detail as well as his retro style.

The Alpha Bullet Bike was designed by Erdem almost two years ago. Erdem began designing such bikes after seeing the film The World’s Fastest Indian. The film features land-speed record bikes on the Bonneville Salt Flats.

Erdem began making models of the Alp's motorcycles before he saw the film. Once he saw the film, he was ready to design motorcycles for the Bonneville Salt Flats. One such design was the Alpha, which clearly resembled the most infamous marine predator of all. 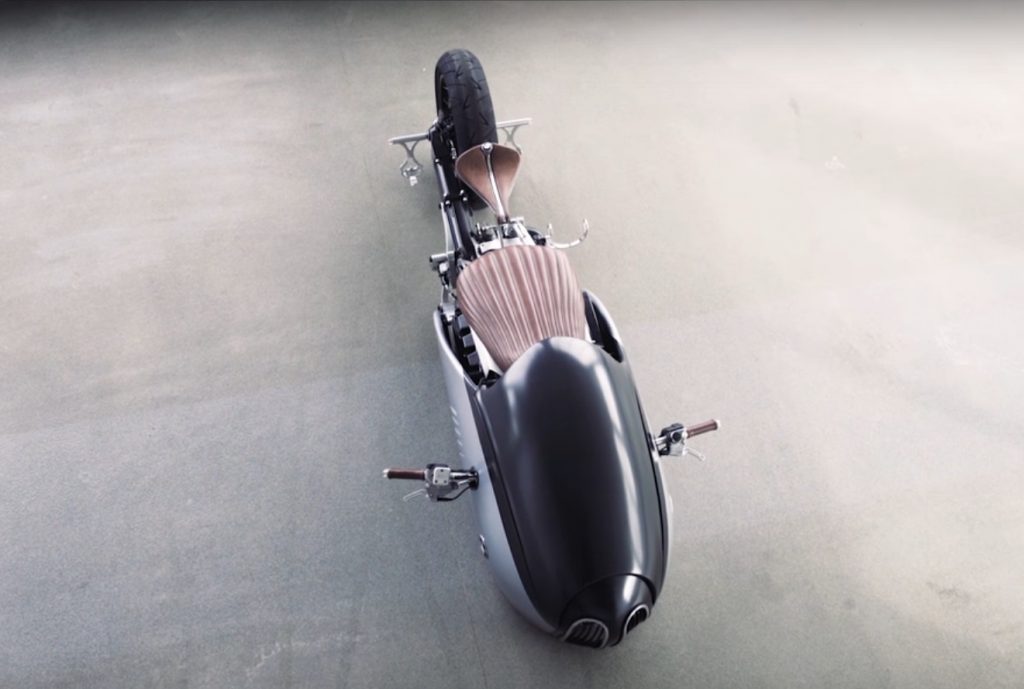 Erdem wanted the Alpha Bullet Bike design to resemble the great white shark. “Great white sharks have always been an inspiration to me,” he said. He decided to mimic their anatomy for Alpha’s bodywork. "It had to look powerful and beautiful at the same time.”

“If you look at the body of a shark, you can see that it’s clean and perfect. But inside, it’s so complicated," said Erdem. "So Alpha’s front end is clean and smooth, while the back is the powerful and ugly side—symbolizing the tail of the great white.”

According to Erdem, the rear part of the bike shows where the power comes from while the front of the bike is purely for aerodynamics. He said that these two styles are not connected. “The rider must be the connection between beauty and the beast.”

Construction of The Alpha Bullet Bike

The construction of the custom bike took long as Erdem did not have someone to build it. This changed when Erdem decided to work with machinist Mark Atkinson, of Salt Lake city, to build the bike.

Atkinson could not get in touch with Erdem at first; however, he went ahead and began working on the bike anyway. He had a wrecked BMW K75 motorcycle which he used to construct the chassis for the engine. 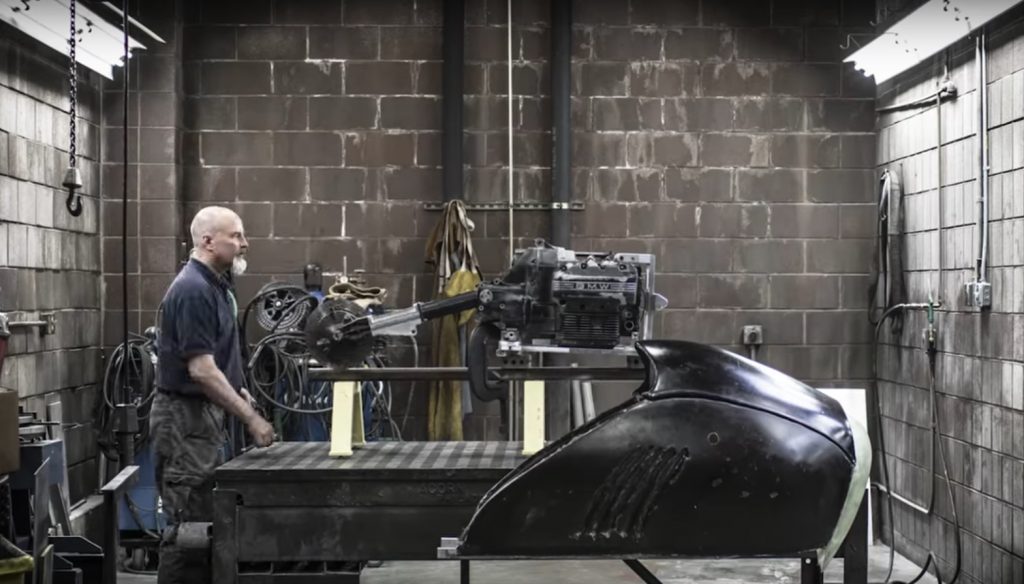 Atkinson’s methodical approach allowed him to work through problems one at a time in order to develop the chassis from the ground up. Instead of looking at the whole picture, he let the problems surface and worked through each of them one at a time. Atkinson said  “ I plan the total as an abstract distant goal but focus on each individual component. As I go, I design parts and pieces.”

By using this approach, Atkinson had every part modeled which allowed him to make modifications as required. He would often redo part of the bike over and over again until he felt that they were right. Atkinson said, "I let the bike organically find its own way: That took years to understand. Bikes have their own personalities, you just have to let them out.”

Atkinson worked on the bike for some time before he was finally able to get in touch with Erdem. Erdem was hesitant at first about working with Atkinson as previous attempts to bring his design to life had failed.

Erdem did not respond to Atkinson at first as all previous collaborations ended with no progress. This changed when Erdem saw a picture of Mark's work. He saw that Mark had already started on the project which made him believe that their collaboration would work, allowing Erdem's dreams to become a reality.

Erdem knew that Mark was serious about the project and that he had the ability to bring his design to life. They two worked together from different ends of the world, Erdem from Istanbul and Atkinson from Utah. It took about 16 months "to make Alpha more beautiful”.

The aerodynamic nose of the Alpha was made form a combination of basalt and carbon/basalt blend. The basalt is a lava rock. It is extruded into strings and woven into a cloth similar to carbon fiber. “It’s an unusual and very beautiful natural fiber,” said Mark.

Atkinson’s friend from Boeing helped him get the nose looking right. Mark also worked BMW’s famous kidney grilles into the nose which was styled after the legendary Mille Miglia-winning BMW 328i. Atkinson said, “I think the BMW 328 Mille Miglia is one of the most beautiful cars of all time, and the kidneys on that car stuck in my mind.”

The Alpha Bullet Bike is powered by the K75’s 740cc inline three-cylinder BMW engine. The engine is similar to the M10 and S52 car engines. According to Atkinson, these engines use fine thread fasteners and correct length bolts which are machined to exacting tolerances. He says, "I’ve been building engines for a long time, and BMWs are by far my favorite. They design like I design.” 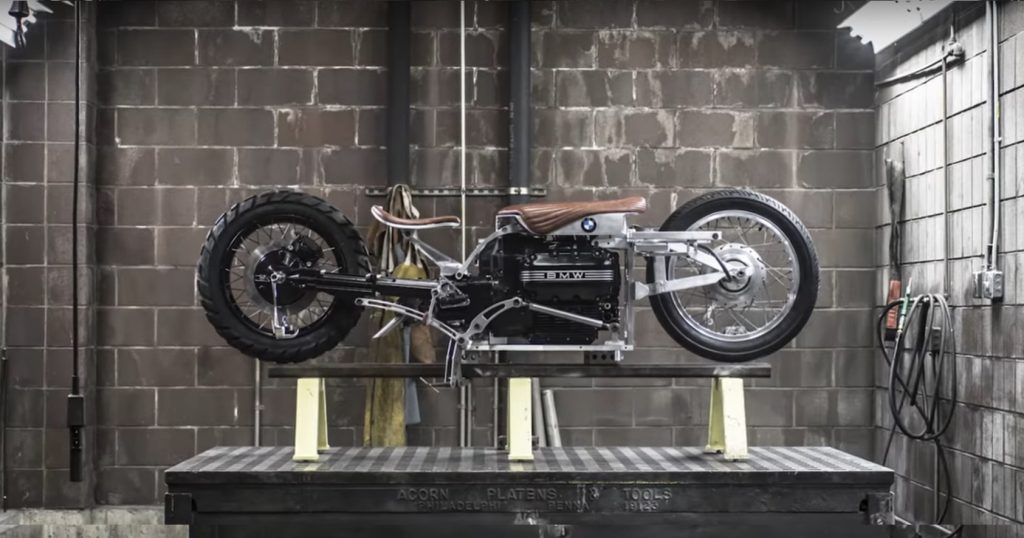 The Alpha Bullet bike could probably be made street legal as it has lights, turn signals and a horn. However, according to Mark the bike is not the most user-friendly bike out there.

This beautiful extraordinary motorcycle was created by two kindred spirits who learned a lot through the process.