The saying "two is better than one" goes much deeper than just a philosophical statement. Cooperation between two creatures is an evolutionary advantage that makes the unit as a whole much more capable than if it were to work on its own. With that in mind, Carlos S. Casarez and Ronald S. Fearing designed robots that assist each other to climb higher walls than if they were climbing alone. 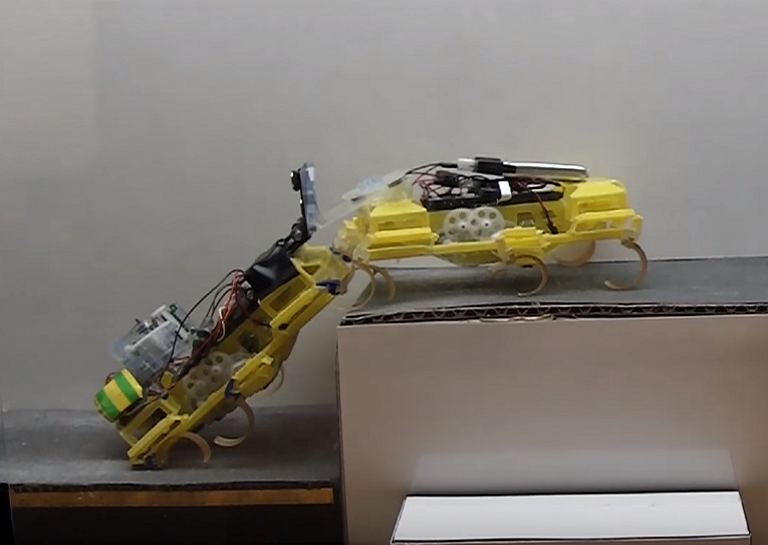 The researchers got the idea from ants as they watched them cling on to each other and then help push themselves up a wall. Ants own some impressive hardware that allows them to lift 10 times their own weight, but even with all that strength sometimes it is not enough. Ants can carry large pieces of food, many times larger than themselves without issue. However, when they come across a steep incline, they often do not have efficient leverage to lift themselves up. They solved this problem through cooperation, an ant would pull from the top as another pushed fro the bottom, allowing them not only to lift many times their own size, but also carry objects over obstacles many times taller than themselves.  Carlos S. Casarez and Ronald S. took note of this and decided to experiment with the design. The result was robots that performed in tandem that were able to climb much higher than when they tried to climb alone.

They then decided to integrate an assistance mechanism to attempt the same thing with cooperation and mutual benefits in mind, the engineers devised a plan that incorporated multiple robots to assist one another, making the robots achieve much more than they would ever be able to on their own. You can check out their invention below.

The robots were 10cm long each and tested individually, they could merely pitch themselves against the wall. However, the engineers cleverly designed the robots to assist each other through a winch mechanical system that would take advantage of  leverage systems that enabled the robots to scale the wall.

According to their research paper, their robots weigh 47.3g and cooperatively were able to scale the height of their own body lengths. The technology sees a future in search and rescue missions to assist microrobots where they cannot perform a task alone, but with some assistance, their search area can be scanned much more thoroughly and effectively.

Small robots are capable of navigating narrow passageways and collapsed buildings that are inaccessible to humans. Small robotic production is also cheaper because off cost reductions in building large quantities, allowing more robots to be produced at a cheaper cost which. The small robots can assist in search and rescue missions to help accelerate the discovery and rescue of survivors. Robots are constantly being integrated into research missions because they so effectively crawl through spaces no one else can. As new ideas emerge with small robotic devices, rescue missions will continue to become more effective which is exactly what VelociRoACH aims to do.