To the west and south of modern Cairo, lies Giza in the vast desert. While Great Sphinx guards the plateau, massive pyramids of Khufu (Gr. Cheops), Khafre (Gr. Chephren), and Menkaure (Gr. Mycerinus) dominates the region. They all ruled Egypt during the 4th Dynasty (c. 2500 BC).

The grand pyramid complexes include temples, causeways, and much more. Moreover, tombs of the elite members of the royal family, the nobility, and the priesthood surround the pyramid.

Great Pyramid of Giza, one of the wonders of the world, has fascinated humanity for ages. The archaeological and historical evidence say that the Great Pyramid of Khufu and its companions are royal tombs built during the Old Kingdom. But besides what they were built for, the meticulous work went into their construction strikes us the most.

Without a doubt, the Great Pyramid of Giza is one of the most important engineering marvels on the planet. The breathtaking construction that emerged 4,500 years ago lines up to the cardinal directions to within 1 degree of arc.

Till date, this masterpiece stands amongst the best construction plans. A French architect Jean-Pierre Houdin collaborated with a "3D experience company" called Dassault Systèmes, and created a virtual model of the pyramid. The model demonstrates each and every phase of the construction according to Houdin’s theory.

Though the pyramid has been studied and photographed an indeterminable number of times, the inside of it remains a conundrum.

Houdin's theory of how the Great Pyramid was built

Through a painstaking investigation and extensive documentation, Jean-Pierre’s work got translated into computer modeling.

According to the theory of Houdin, the pyramid was built via a long external ramp. Just by using the natural ridge on the plateau, the ramp began higher up than the bottom of the pyramid. With a slope of 8.5 percent, the external ramp might have been used for supplying.

Most of the volume (85 percent) might have been constructed using this external ramp. However, it served no use beyond the bottom third of the pyramid’s height, as its proportions would become dangerously unfeasible. This led to the usage of internal ramps which spiraled upwards from the base of the pyramid. It provided a means of transporting materials right up to the summit.

The internal ramp was a straight quarter ramp with a slope of 7 percent, which might be constructed beforehand. Moreover, it was used to transport the façade’s limestone blocks from the Toura quarry. After the external ramp had served its purpose, it was dismantled. The same limestone blocks could be used to complete the last 15% of the monument’s volume.

Hence the pyramid was entirely built from the inside, starting with sides and reaching to the top layer by layer. The sides might be placed at the end thereby reducing the overall completion time by several years. According to the myth, it took 20 years to build this huge structure. This means that each day and night, for every five minutes a block needed to be moved into place, which must have required thousands to labor. 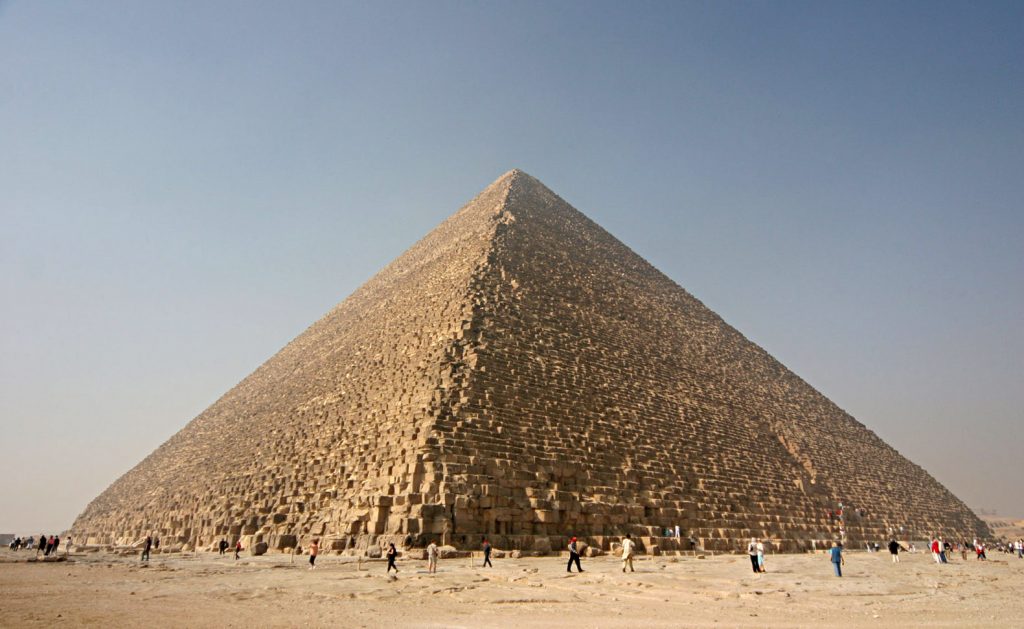 Since the dawn of the theory, it never stopped developing. Moreover, Jean-Pierre Houdin succeeded to find evidence on site to support his ideas. With the support of Egyptian authorities, MiViM (Multipolar Infrared Vision Infrarouge Multipolaire) Research Chair at the Université Laval in Québec, Houdin used infrared thermography to verify the suspected presence of an internal ramp by the end of 2010.

“There would be two predominant differences between pyramid building now and then. First, instead of people pulling the sleds which carry the stones up the ramps, you would use something with an engine," says Houdin. Secondly, "for the topmost 10 or 15 meters, you would use a small crane."

However, Houdin says that it might not be feasible to build the entire structure with cranes as they wouldn't be able to reach far enough to lift materials from the base to the center of the top of the pyramid.

In 2010, Dassault Systèmes and the Museum of Fine Arts (MFA) in Boston, decided to model the Giza plateau in 3D. By the end of this ambitious project, anyone and everyone will be able to navigate across the pyramid online in 3D.

A documentary by Dassault Systèmes is available on this outstanding theory.

Moreover, the UK-based organization, Earth Pyramid Project, is raising funds to build a pyramidal structure in a yet-to-deicide location. Funded by governments and organizations around the globe, it will serve as an opportunity to test Houdin's construction theory of the Great Pyramid.

Currently, the project is under planning phase and the construction is expected to take 4 to 5 years. Once finished, the time capsules will be stored in the chambers and the pyramidion will be placed on top, sealing the pyramid. The exterior will be made of stone from all over the world including granites, marbles, sandstones and much more along with modern materials like metal, glass, polymer. The project aims to complete the construction for the International day of Peace 2025 (21st of September).

This project will not only provide an opportunity to solve the mystery behind the construction of ancient pyramids but also showcase emerging low-carbon construction products and techniques.