Could You Beat a T. rex in a Race?

Jurassic Park is now 24 years old, that might well be older than some of our readers, who knows. One of its most iconic scenes sees some of the film's heroes Elle Sattler (Laura Dern), Ian Malcolm (Jeff Goldblum) and of course, Muldoon (Bob Peck) flee for their lives in a Jeep Wrangler from a marauding T. rex. We always wondered if it was the 4.0 liter AMC engine option. But could it have actually happened?

A new study from the University of Manchester seems to suggest it's less than accurate. This will probably not surprise many, Hollywood is not famed as a source for scientific information. The Velociraptors were over twice the size of the real ones for instance. And where were the feathers? Sorry, inner paleontologist rant over. 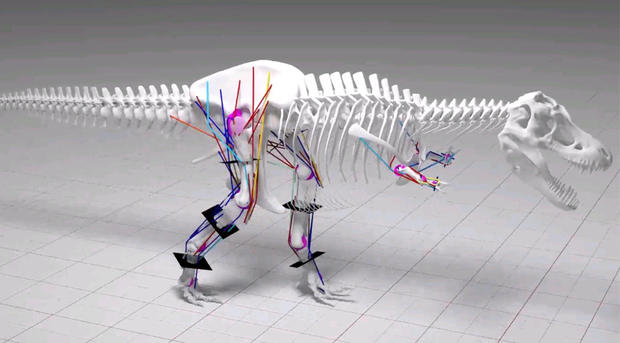 First of all, if you are not familiar with this debate, we've just opened a can of worms (or is it Pandora's box, we don't know anymore). Anyway, most of our readers are probably familiar with the scene, but if not we've included it here for your entertainment.

As we can see, the film suggests that a fully grown Tyrannosaurus rex could keep up with, even gain ground on and catch, an accelerating Jeep, at least for some time. Only to give up once it reaches its endurance limit, or did it hurt its leg on that tree branch? It was only angry after all, didn't it eat a goat, pieces of a car and some lawyer on a toilet several hours previously? Who knows, sorry cares, it's fiction anyway.

Now as an interesting aside, yes we are padding, the line "we must go faster" also appears in Independence Day, also said by Jeff Goldblum. And also, the T. rex's roar was actually a slowed down recording of a baby elephant. OK getting too geeky, sorry.

Although the latest study adds an extra body of analysis to one school of thought, this is a long running debate amongst paleontologists. To summarize, there are basically two camps, yes there always is. One camp has always argued that T. rex was an active predator that actively tracked and chased down its prey. The other is that T. rex, at least as an adult, was much more of a scavenger, well bully really, who fed on carcasses or chased off smaller predators to claim their prize.

The recent study seems to suggest the latter theory. It must be borne in mind though that in reality, T. rex was probably a mixture of the two. It's not an either/or situation. Many predators today are not "proud enough" for want of a better phrase, to take advantage of an easy meal.

No serious paleontologist, or T. rex lover, would disagree that it is possible that it could have hunted slower moving prey. But at the same time, it would not pass up the opportunity to "pick up scraps" as moved around its territory.

The new paper, published in Peerj, suggests that the T. rex could likely have reached speeds of up to 18 kilometers per hour or 5 meters per second. Top estimates, do however extend this to around 8 meters per second. Using the new study's estimates, it could easily give you a pretty thrilling chase on foot, you might even win. By way of comparison, Usain Bolt can run at around 45 km/h over 100 meters, that's about 12.5 m/s. Clearly, less than adequate to catch you in an accelerating vehicle.

Dr. William Sellers, the leading author explained in a statement "The running ability of T. rex and other similarly giant dinosaurs has been intensely debated amongst paleontologists for decades,”. “However, different studies using differing methodologies have produced a very wide range of top speed estimates and we say there is a need to develop techniques that can improve these predictions.” he continued.

Dr. Sellers' team combined two separate biomechanical techniques to try to understand how the animal might have moved in life. Multi-body dynamic analysis and skeletal stress analysis were employed for their study. Their results seem to confirm many previous arguments that if it tried to run it would have shattered its leg bones.

Sticks and stones may break my bones

The main reasoning for the study's findings is a purely mechanical one. In engineering, it is well known that the stress on an object grows exponentially as the size increases. A good example would be a human and an insect for instance. Let's use an ant, by way of example, they tend to carry stuff a lot which, by our standards, are massive.

We humans can lift, at best, perhaps a couple of times our own body weight. Beyond this, our ligaments, muscles, and bones would fail. An ant, by comparison, can lift around 40 times its own body weight whilst simultaneously showing no negative side effects for doing so. This is explained by the fact that weight increases exponentially relative to length and height. Or the power of three, essentially.

Given this, and the massive bulk and size of a fully grown T. rex, it is highly unlikely that its skeletal frame could realistically resist the basic physics of the stresses involved when attempting to run. A further point, specific to the scene, might also be that the impact with the branch should probably have crippled our mighty predator. 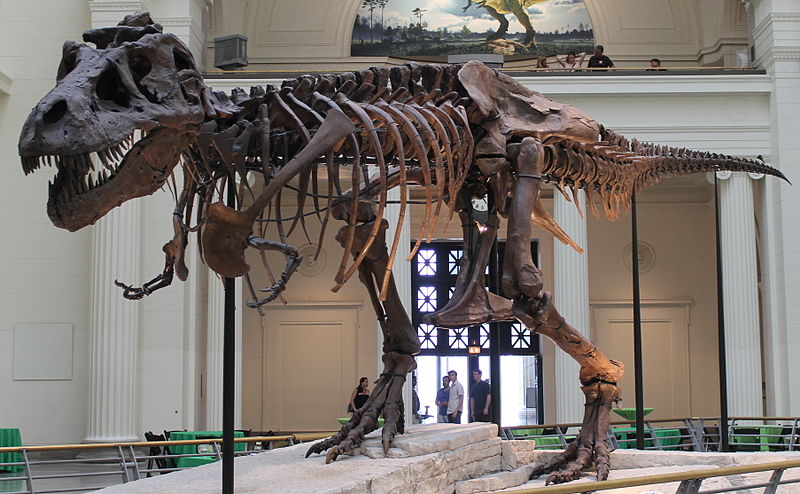 Sue, is one of the most complete T. rex skeletons found to date [Image Source: Wikimedia Commons]

The jury is still out

As convincing as this study is, it must be remembered that this is a highly emotive subject to fans and scientists alike. Some simple lateral thinking will yield some pertinent questions. For one, T. rex wouldn't have evolved to be that big if it wasn't beneficial in some way. Plus, it must have been successful enough as a carnivore to eat enough meat to get that large.

Whether it was an active apex predator or very imposing scavenger, we may never know the answer. Logic would demand some further inquiry. For instance, if T. rex was a lumbering beast, just how fast could its prey move? Perhaps, it was fast enough, or even faster? Perhaps, it was a fantastic ambush predator and attacked before its prey could get to full speed? Once again we apologize, this is an ever evolving field. If we peaked your interest, you are now committed to years of ups and lows. Enjoy.

OK back on topic, excusing the fact that dinosaurs have been extinct (or are they?) for over 65 million years, but how accurate is the science and biomechanics behind it? Let's take a quick look.