Couple design and build a mortgage free home for $33k

The house that you see here comes complete with two sitting rooms, a kitchen with a dining table, wood stove, plenty of storage and a bathroom. However what’s different about this small mortgage free home is that it is in fact very small, at just eight feet wide - which is just 46 inches than the world's narrowest house we reported on.

Another thing that may astound you is the cost. It comes in at $33,000 and this includes all the appliances. This small home was designed and built by a couple who wanted to be free of the burden of a mortgage and so built themselves a home so that they could live in Oregon on five acres of land that they own.

Like many of us, Andrew and Gabriella Morrison’s lives revolved around working hard to pay the mortgage each month of their conventional home. However, unlike the majority of people they chose to do something about it and they were able to leave the rat race behind thanks to both of them having a background in construction. 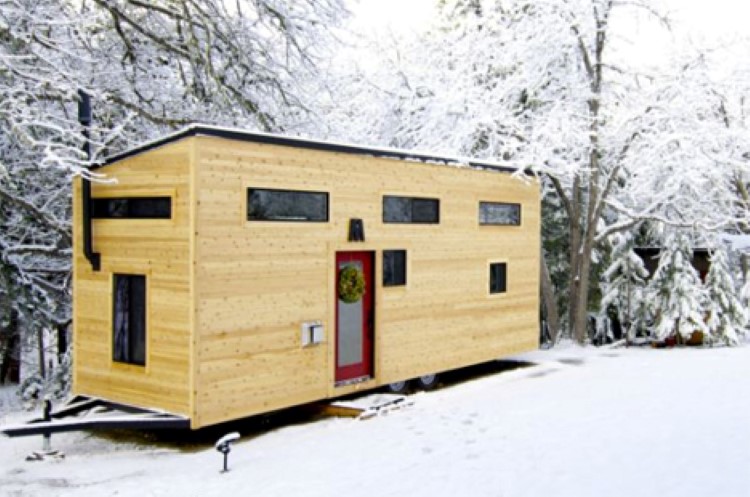 Gabriella has always had fascination for housing for the majority of her life, she has always had an interest in how to occupy and get the most out of space. Throughout her life she has lived in many different types of housing, this has been anything from a mansion by the ocean in Rio De Janeiro to a log cabin of 80 square feet on Colorado without modern amenities, such as no plumbing or electricity. She admits that she is never happier than when living in a small space among nature and family. The new tiny house on wheels certainly fits that perfectly.

This background gave them the chance to have their financial freedom after the pair came up with their own design for a small home, that should they choose to, can be relocated anywhere they want very easily. The result of their design is hOMe, a narrow home that has been designed on the base of a trailer and which comes with some superb ways of saving space and making the most of the space.

The home may be small but it doesn’t lack the necessities. It has a shower, toilet, sleeping quarters by way of a loft which gives privacy courtesy of IEA dressers. Not to mention a kitchen complete with counters in granite, box staircase that doubles as storage for a washer and dryer, along with clothing and general storage.

The portable home took just four months to complete at a cost of $22,000. The total cost of the home was boosted by another $11,000 for high end appliances, cabinets, fixtures and furniture. Power to the home is via solar panels, while heat comes from a wood stove.