Covão do Conchos Spillway is not a natural phenomenon. It is a construction that diverts water from Ribeira das Naves to Lagoa Comprida.

One can't help but be mesmerized by the Covão do Conchos, a spillway in the middle of a tranquil Portuguese lake.

A spillway is a drainage channel within a dam that is used to provide a safe release of floodwater to a downstream area. It prevents water from spilling out of the dam and causing damage.

Covão do Conchos is an example of a ‘bell-mouth spillway’ or a 'morning glory spillway'. The name comes from the resemblance of the circular drop inlet to a morning glory flower. It is a unique infrastructure which prevents water from overflowing during the flood season. 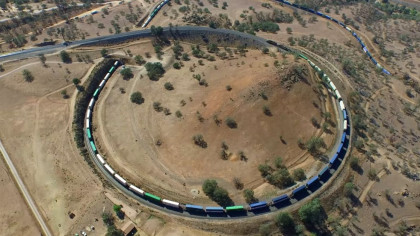 The spillway is situated, near Guarda, in a lake in Serra da Estrela Natural Park, Portugal. It is a part of the Conchos Dam, within the hydroelectric system of Serra da Estrela.

It is hard to believe that Covão do Conchos is not a natural phenomenon. The spillway was built in 1955 with the aim of diverting water from Ribeira das Naves to Lagoa Comprida. The diverted water travels through a 1519 m (4,984 ft) long tunnel to reach its destination.

The opening in the middle of the lake measures 4.6 meters with a wide circumference of 48 meters. Over the past 60 years, nature has taken its course on the funnel with foliage and moss growing around the edge.

Watch as we get up close to the Covão do Conchos with this incredible area drone footage.

The Serra de Estrela Natural Park attracts many tourists. It is a popular hiking site, however, visitors are warned to be careful on the treacherous paths.

During the winter season, the area becomes covered in snow and ice. It is recommended to wear waterproof walking shoes as well as thermal weather-resistant clothing as temperatures may dip.

A novel megayacht boasts a giant domed observatory, much like a black hole