A new machine developed by researchers at the University of Oklahoma allows infants at risk of cerebral palsy (CP) to better develop motor skills. Testing for the device has just been scaled up to 56 babies per year as the team hopes to bring the technology to the mass market. Babies lay on a wheeled car then attached to the tripod machine. Each infant wears a webbed cap filled with sensors that monitor their brain activity and track movements. You can take a look at the device in action in the video below.

The team is made up of biomedical engineers and physical therapists, and their aim is to focus in on the reward centers of the brain. Lead researcher Thubi Kolobe developed a correlation technique to determine which kids are most at risk of developing CP. When kids move at a young age, their brain develops accordingly as well. When children move but their brain processes no reward, then the brain will sometimes strip away the function of movement. This robotic device is aimed at stimulating the brain of infants to allow smaller children to move great distances, thus engaging and growing the corresponding part of the brain.

Called the Self-Initiated Prone Progression Crawler, the device is in its third prototype stage where the team has implemented a variety of safety and comfort measures. The sensors on the babies head are able to analyze what the baby wants to do, and direct the robot to assist in that movement, according to IEEE. 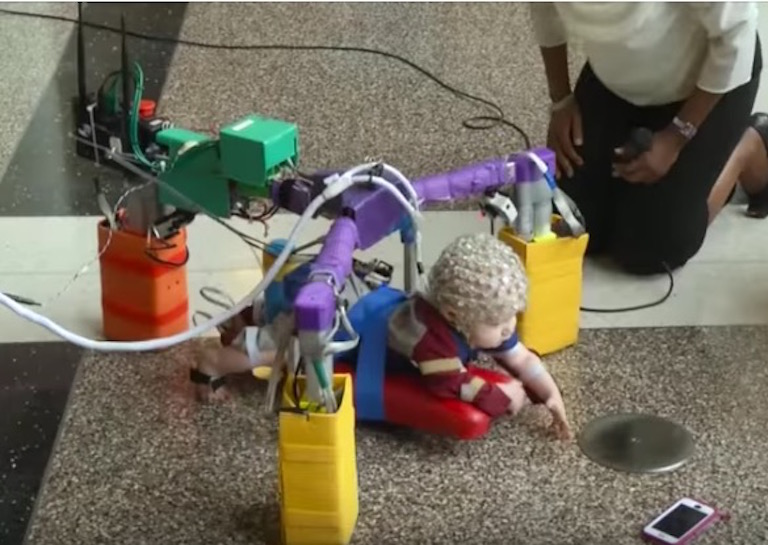 In all of the testing so far, parents have noticed a significant increase in infant movement, with some even wanting to purchase the device for home use. While the device may not be there yet, the results are promising in a hope to eliminate the disorder altogether.