World Bank Group President Jim Yong Kim expressed concern about the legitimacy of cryptocurrencies. All major cryptocurrencies rose despite the remark on back of a softer approach from US regulators.

All cryptocurrencies rallied strongly on Thursday after showing steep falls earlier in the week, with Bitcoin rising as much as 11.9 percent.

The bounce in cryptocurrency markets was due to softer than expected stance from US regulators, analysts said. The rally in the market came in spite of more negativity from the world of traditional finance.

The development bank is carefully examining blockchain technology, a platform utilizing distributed ledgers to allow digital assets to be traded safely. World Bank President Kim said that there was hope the technology could be used in developing countries to follow the money more effectively and reduce corruption.

The value of cryptocurrencies jumped in 2017 before plummeting. Bitcoin which lost nearly two-thirds of its value since mid-December was still down around 20 percent in the past week.

“As we approach the weekend - traditionally a period with less trading volume and therefore more prone to wild movements, with a tendency to dip - we continue to recommend closely watching bitcoin's price to gauge the direction of the crypto markets.” The London Block Exchange, a UK bitcoin startup, wrote in its daily market report on Thursday.

"While today's early hours have been positive, with bitcoin rising 8% and leaving the past day's bear channel, it's impossible to predict the short-term direction," it said.

Bank of International Settlements chief Agustin Carstens said in a speech this week there was a strong case for authorities to rein in digital currencies because their links to the established financial system could cause disruptions. 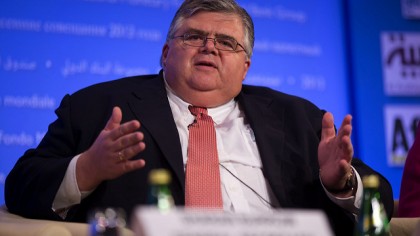 Federal Reserve Chair Jerome Powell has said that governance and risk management will be critical for cryptocurrencies.

A member of the executive board of the European Central Bank (ECB) Yves Mersch said in a lecture at the Official Monetary and Financial Institutions Forum in London on Thursday that virtual currencies were not money and they would not be for the foreseeable future.

President of the ECB Mario Draghi said publicly that European banks could hold positions in Bitcoin.

“However, recent developments, such as the listing of Bitcoin futures contracts by US exchanges, could lead European banks too to hold positions in Bitcoin, and therefore we will certainly look at that,” Draghi said while delivering the opening statement and closing remarks at the European Parliament meeting this week.

Amazon May Accept Cryptocurrency Payments in the Future