Gardening can be hard work, but it can also be one of the most rewarding tasks you complete during the day, Many fruit and vegetable plants require constant watch care to protect them from bugs and pests, but one new spherical garden is taking having a green thumb to the next level. Rather than having to take carE of your plants yourself, researchers have found a way to put plants inside of a sphere and allow them to find their own water and sunlight, according to Science Alert. This may sound absurd, but through a variety of sensors, the plants are monitored and the sphere adjusts accordingly.Check ou the video below to see it in action.

The project is the work of William Victor Camilleri and Danilo Sampaio from the Bartlett School of Architecture at the University College London.

"Its core of twelve garden modules, each carrying native British species on outwardly-extending linear actuators allow the structure to become mobile by shifting its centre-of-gravity. Electro-physiological sensing of the state of individual plants collectively and democratically controls decision-making of the orientation of the structure and its mobility."~ Interactive Architecture

The machine essentially reads the needs of the individual plants and moves itself to a place where the environment is more suited for growth. Having giant autonomous plant spheres wandering around cities is obviously not beneficial to society, but this study does show promise in the field of autonomous farming. Rather than relying on human intuition, sensors will tell growers what their plants need, and perhaps how to adjust their planting in order to be more fruitful in production. 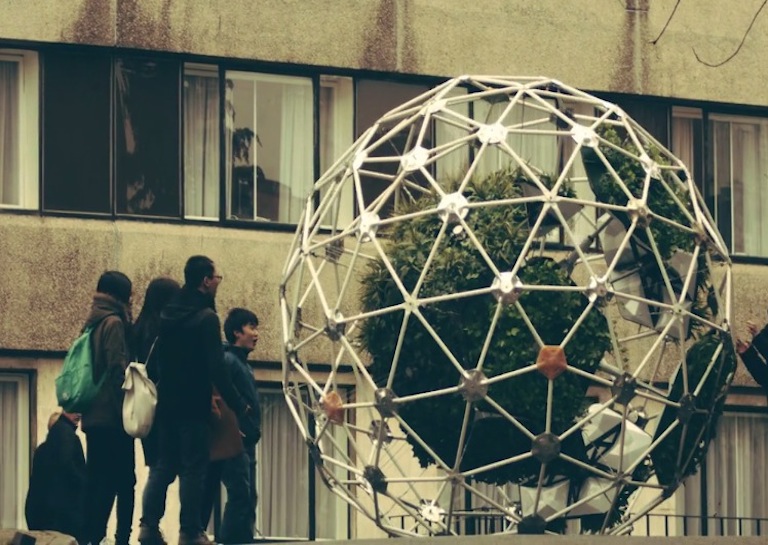 This autonomous plant sphere kind of gives plants a brain, and allows their physiology to adjust how they are positioned. One possible avenue for this technology is plant controlled biosensors on a much smaller level. Imagine a series of small autonomous spheres, seeded with the plant desired to be grown, which would then seek out the best location and environment for planting. This could revolutionize farming throughout the world, and maximize growth in the ever-shrinking farming environments.

SEE ALSO: Garden Igloo is embraced through all seasons