Tesla's Elon Musk bet an Australian billionaire that he can solve South Australia's power issues in just 100 days. If not, Tesla will still do the work - free of charge. 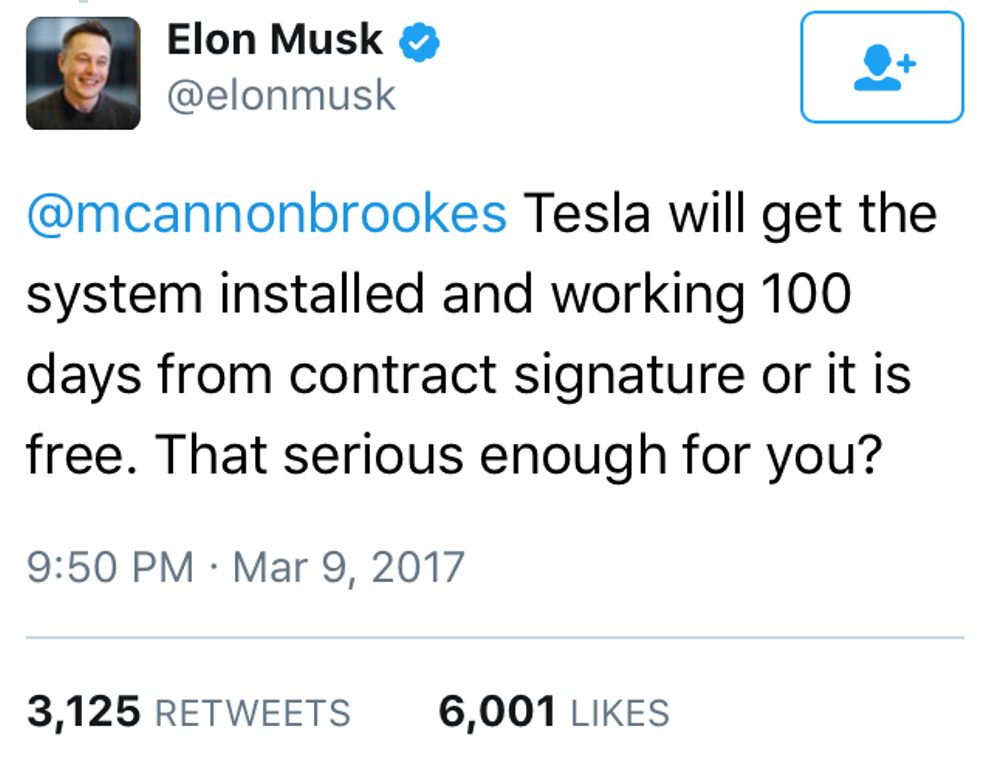 It all started when Mike Cannon-Brookes, co-founder and co-CEO of Atlassian, tweeted out this link:

The tweet linked to an AFR Weekend story in which Lyndon Rive, Tesla's VP for energy products, said he would help install 100-300 megawatt-hours of batteries to prevent blackouts plaguing South Australia. And a lot of people (particularly frustrated Australians) doubted Rive's claim or saw it as completely outlandish. Sure, the energy crisis could be solved, but in 100 days?

And then there was this follow-up tweet, just to see if Tesla meant what it said:

And, in true Musk fashion, he responded - with an added shock:

@mcannonbrookes Tesla will get the system installed and working 100 days from contract signature or it is free. That serious enough for you?

Cannon-Brooks responded with "You're on, mate," and requested seven days to set up the politics and funding needed to set the stage for the bet. The rate Musk proposed is a global price of $250/kWh, and Tesla is guaranteeing over 100MWh with its systems. As for other pricing issues, Musk said variations in shipping, taxes and installation labor fees are out of his control for the bet.

After all, this is the man who got tired of traffic and tweeted about making his own boring company. Now, that boring company is actually rumored to be in the works. He's also already had success in making tight energy deadlines. Tesla recently revealed an 80MWh storage facility in Milar Loma substation in Ontario. The company finished its contract only 90 days after signing with Southern California Edison. The Ontario project uses 400 Tesla Powerpacks and can store enough energy to power 2,500 for a day.

Will Musk make the deadline? Probably. But in the meantime, the world (and definitely all of Australia) will be watching to see if the eccentric innovator can make good on this very public promise.