The most impressive airports ever built continues to be one of the most important engineering feats of the century. The world's longest airport isn't new, in fact, it's been around for over 20 years. This incredible feat of engineering was built on its own island, constructed from three surrounding mountains and millions of cubic meters of concrete. Completed in 1994, the Kansai International Airport is an architectural and engineering marvel in all of its features. Engineers and planners in the late 1980's sought a way to revitalize the Kansai region of Japan. This region was struggling to keep up with the fast-paced export trade growing in Tokyo. Growing protests from local residents of the region forced engineers to construct an island as the base of the airport. After much deliberation, a location 38 km (24 miles) southwest of Osaka Station was selected.

The seascape under the selected site location was made up of alluvial clay with the seafloor ranging in depths up to 18.5 meters (60 ft). Incredibly, the depth of the location was not the driving constraint for construction, rather the clay found in the seafloor posed many issues for engineers. The main problem with clay as a foundation is its ability to retain moisture. To solve this problem engineers utilized a newly emerging technique for sea-based foundation stabilizing. Using sand drains, 1.2 million of them, engineers effectively stabilized the sea floor in order to hold the weight of the proposed island. To create the sand drains, engineers drove tubes deep within the clay and injected millions of tons of sand, then removed the cylinders. These columns of sand continue to function as drains to the surrounding clay, keeping the foundation from becoming saturated with moisture, therefore causing settling.

Upon this stabilized seabed, 48,000 individual concrete tetrahedrons [see below] were stacked to form a firm foundation, each weighing in at 200 tons. To fill the gaps between the forms, 178 million cubic tons of earth was taken from nearby mountains and poured on the site using specialized barges. The seawall and base were completed in 3 years, and construction of the airport facilities began upon the 4 km by 2.5 km (2.5 by 1.6 miles) island base.

Upon the impressive island, engineers constructed an even more impressive airport. The structure was designed by renowned Italian architect Renzo Piano, who is famous for other award-winning architectural buildings. One of the most impressive architectural features of the airport is its 15m (50 ft) cantilever terminal structure for airplane docking. In an effort to reduce environmental impact and save on heating and cooling costs, a passive air conditioning system was designed. The structure uses the blade like deflectors along the roof line to channel air through the building. This keeps the inside of the 300,000 square meter (3.2 million ft²) building a comfortable 20° to 26° C (68° to 79° F).

To connect the island to the mainland, a bridge was constructed which allowed for heavy traffic flow to and from the airport. The impressive bridge measures in at 3750 m (12,300 ft) and is the longest truss bridge in the world, seen below.

In 2007, a secondary island was completed to relieve some of the mounting pressures faced by increasing traffic on the main runway and terminal. Measuring in at 4 km by 60 m, this island currently functions only as additional runway space, with the initial proposed terminal option being postponed due to budgeting issues.

Even with a strong foundation design, engineers expected the island to sink an estimated 5.7 m (19 ft). Looking back, engineers admitted this number was selected optimistically. Presently, the island has sunk 13.05 m (42 ft) at a rate of 50 cm/yr following construction. Through the implementation of stabilizing techniques, engineers have lowered that to a continually dropping rate of 6 cm/yr. Currently, engineers believe they have a grasp on this previously worrisome sinking rate, and improvements to airport facilities are in the works. 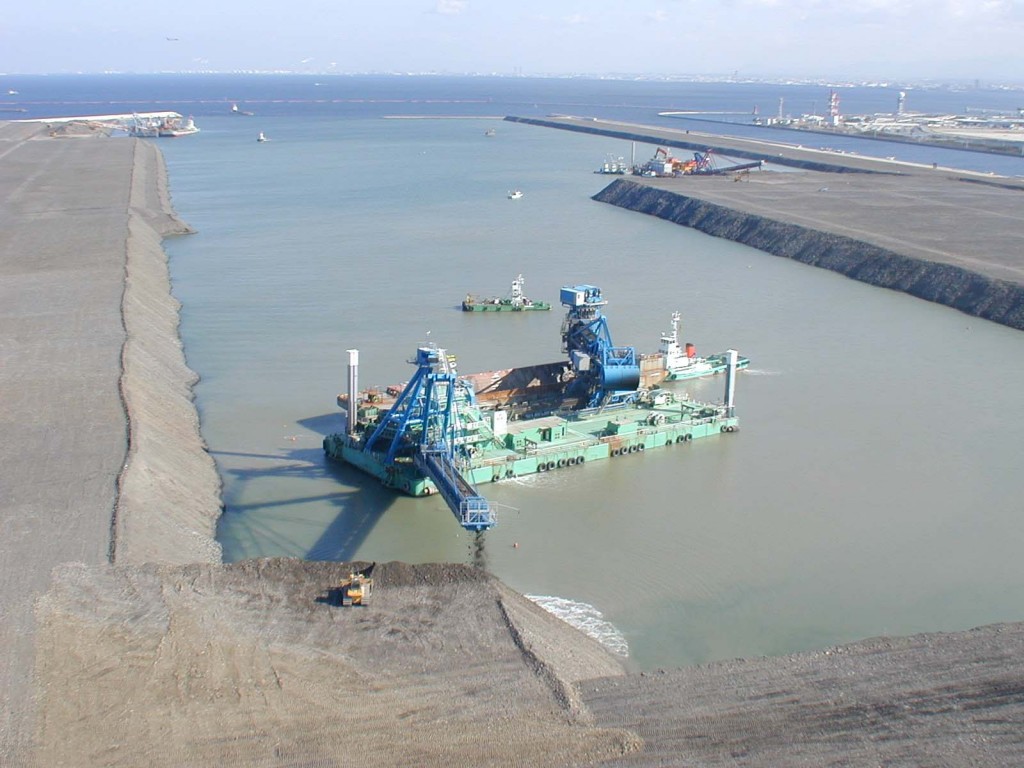 Among the architectural and engineering features boasted at the airport, the island displays impressive environmental features as well. Kansai International Airport maintains one the largest solar farms of any airport in Asia. As well as this major green technology, the airport utilizes hydrogen-powered vehicles as well as taking extra care to go above and beyond in their wastewater treatment. Initially, this project could be considered very environmentally destructive, however, the environmental steps mentioned above were taken as a means to offset this destruction.

The airport currently averages about 920 flights daily, much of which involves cargo plane traffic. Functioning as a present-day hub for 6 major airlines, the airport is living up to design expectations. Kansai Airport is continuously cited as one of the greatest engineering achievements of the 20th century. This 20-year-old structure continues to hold its ground against newer engineering marvels, making it that much more impressive.