Rainforest Connection is looking to turn old tech from recycled phones into a mass listening network in the rainforest to alert authorities of  illegal rainforest logging operations. The have launched a Kickstarter campaign looking to raise $100 000 to run two pilot programs that will cover 200-300 kilometers of rainforest in Brazil and Africa.

The idea of the project is to use technology from old unwanted mobile phones to create a real time listening network throughout the rainforest which can warn authorities of any sounds such as chainsaws, gun fire or animal distress. Over 150 million phones are thrown away per year in America alone and this recycling could help save the homes of many endangered species. They also mention that the solar powered device will be made more discrete and camouflage before the full release.

Current monitoring methods make use of satellites which often don't show deforestation activity until it is too late. Using the listening devices offers a real time alert so that authorities can get in swiftly and prevent any illegal activity. A quote from Interpol says that "up to 90 percent of rainforest logging is done by illegal loggers." Once a recognisable signature has been detected, such as the sound of chainsaws, the device sends an sms alert to first responders. 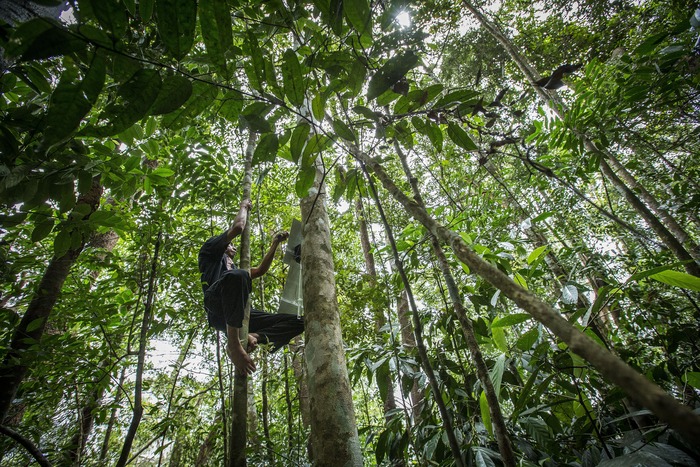 There are many big claims in the campaign such as "each device we install is equivalent to taking 3000 cars off the road", however, there is no denying that it isn't a good idea and goes towards a great cause. Illegal logging and deforestation are causing countless amounts of problems; from destroying the homes of endangered species to contributing towards global warming.

In late 2014, Rainforest Connection plans to release mobile apps such that anyone can listen in on the rainforest from the comfort of their homes, be they on the hunt for illegal activity or just after a nice relaxing listen to the animals and wildlife that live there. The project was founded by Topher White, a physicist and software engineer who has had vared experience in setting up large and small systems in the science world.

Check out the Kickstarter campaign here.