The Converse tale began in 1908 where a rubber shoe company specialized in making galoshes. It was soon after that the company began to use the same rubber to manufacture sneakers. By 1920, the shoes gained massive popularity, resulting in the re-branding of the company to the “All-Star”. The name stuck around and became popular in ways that were completely unintentional. As first designed to be a basketball shoe for players to sink jump shots on the court, the shoes eventually took off in a whole new direction. The shoes became a trend, people wore them as fashion, for comfort, and even to work.

Affluent rock artists continued the craze, making the shoes more popular than ever. As time passed on, more than a hundred years later Converse still retains their name as the casual, party shoe. In tribute to their past success and influence on rock artists and partiers alike, Converse announced an upcoming line of shoes- a competently unorthodox shoe outfitted with an internal Wah-Wah pedal.

The wah-wah pedal is a tool used to alter the tone of a guitar and is generally in the shape of a gas pedal fastened to a block. A potentiometer monitors the displacement of the pedal and accordingly adjusts the tone. However, the engineers at converse tasked with making the shoe quickly realized the button could not be integrated without heavily modifying the shoe, ruining the feel and aesthetic design.

After three years of careful consideration and considerable amounts of testing, it was decided a flex sensor was to be used in place. The sensor was installed down the length of the shoe and measures how much the shoe is flexed, then relays the information back to the wah amp where the sound is projected. The shoes can also connect wirelessly, allowing the playing to groove out without the worry of tripping on a wire. 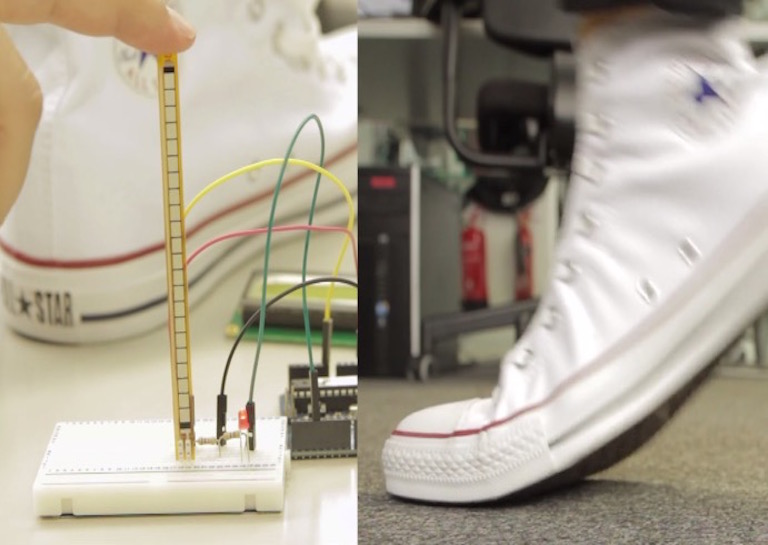 The shoe will likely be a hit among rockers who will be able to rock around the stage without a clunky pedal. Although Converse started out on the court, they ended up stealing the stage. Now with their new line of rock and roll wah-wah infused shoes, Converse continues to relay tribute and dedication to their unintentional, rock and roll heritage.

SEE ALSO: Imogen Heap’s Electronic Gloves Are Reinventing How Music Is Made