Researchers in Greenland are using massive balloons to construct tunnels for the East Greenland Ice-Core Project. 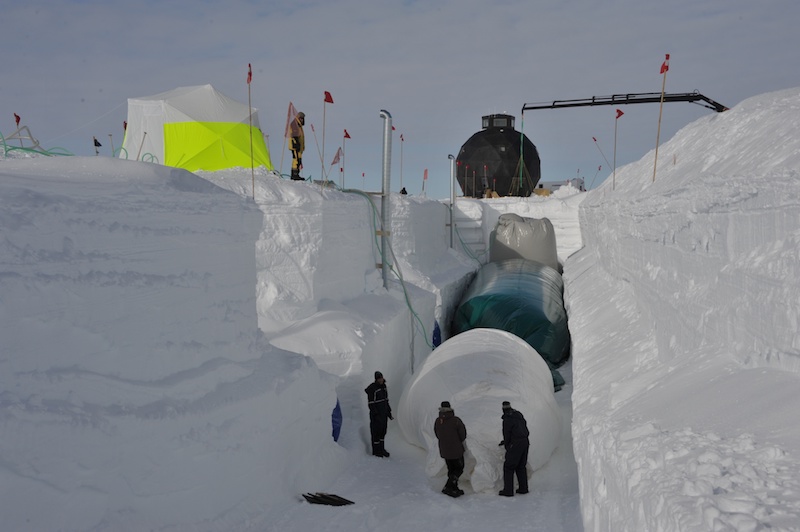 In the Arctic, the land is barren except for a few researchers who are braving the temperatures which constantly plummet far below 0 degrees Celsius. Trees cease to exist and rocks are often buried beneath many meters of snow. Consequently, local building supplies come few and far between.

In the desolate landscapes encircling the poles, researchers must lug their own supplies to their camp site - including their facilities. There is an option to fly supplies in for missions stationed close enough to a village or a town. But the regions scientists are most interested in are hundreds of kilometers from any civilization. Close to the poles of the world locked deep beneath the ice are small molecules that have remained trapped for hundreds of thousands of years. Scientists are examining the pockets to better understand the history of the Earth. Unfortunately, that far up there is little air support.

Of course, humans have been conquering the Arctic for thousands of years. Early civilizations once roamed the Arctic for weeks on end, hunting the vast herds of caribou, deer, and other northerly large game.

The nomad people were constantly on the move, following and tracking their major food supply during the long winter months. Building a permanent home was nearly impossible. Instead of building rock or wooden structures which took weeks to months to build, the arctic people adopted a unique technique: Igloos.

From igloos to balloon built tunnels

Igloos are structures made entirely of ice or compact snow bricks. Historians believe the Inuit people, a tribe who once extensively used igloos, could construct the snowy structure in under 30 minutes. For many years, many people conquered the north. Now, the far regions of the Arctic are home to few. 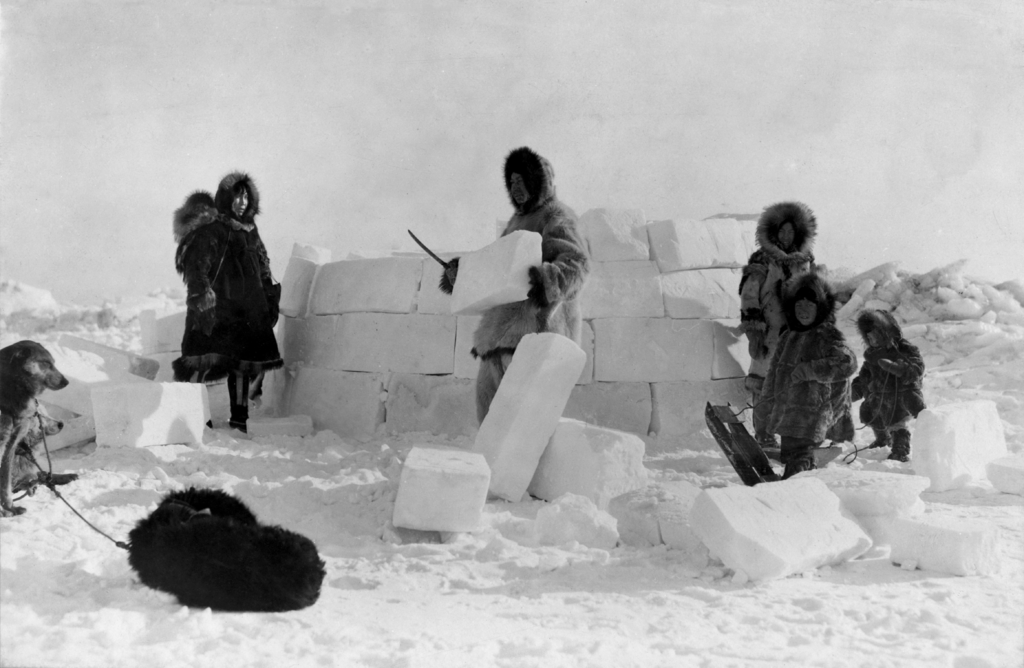 Although most have come to adopt modern lifestyles, humanity's natural inquisitiveness and curiosity could not hold back people from exploring the Arctic for long. Many researchers have lost their lives on Arctic expeditions. Perhaps somewhat ignorantly, most explorers decided to bring with them as many modern comforts as possible instead of using the techniques developed by the Inuit and other Arctic civilizations.

Countless expeditions were led to discover the edge of the world, only to be greeted by massive glaciers that can easily pierce the helm of any ship. Once on land, all the equipment must be loaded onto heavy sleds - including their living quarters. Many struggled to reach their destinations from the weight of their amenities, mostly accumulated by the bulky buildings.

Recent development in Arctic vehicles has reduced the burden of carrying all of the supplies. Now, large tracked machines can carry more equipment farther than ever before. Unfortunately for the arctic, although more buildings can be brought in, it is a minimum priority to remove them after a mission.

The accessibility of the Arctic improved slightly, garnering the attention of the military. In the late 60s, the United States military decided to install a large secret military base, stationed far up north in Greenland. However, after a few short years, the buildings began to collapse. The engineers failed to consider the accumulation of the snow above the buildings, causing the ceilings to cave in. Moreover, the concrete turned brittle in the extreme cold. Eventually, the building was abandoned

Conquering the arctic is an immensely difficult challenge. Prefabricated facilities are far too difficult to ship and install. They also do not last long in the frigid temperatures and are often left behind to rust away in the snow. For centuries, scientists have been approaching Arctic construction all wrong.

The only logical solution is to work with the snow, instead of against it. Researchers working for the Greenland Ice-core Project are reverting to the old days when snow was a material, not just a chore. Last year, the team brought along massive balloons which inflate to help construct the corridors of the research facilities.

The process begins by marking out the area where the tunnels will be installed with flags. Giant snow machines then carve away the snow, leaving behind a massive trench. 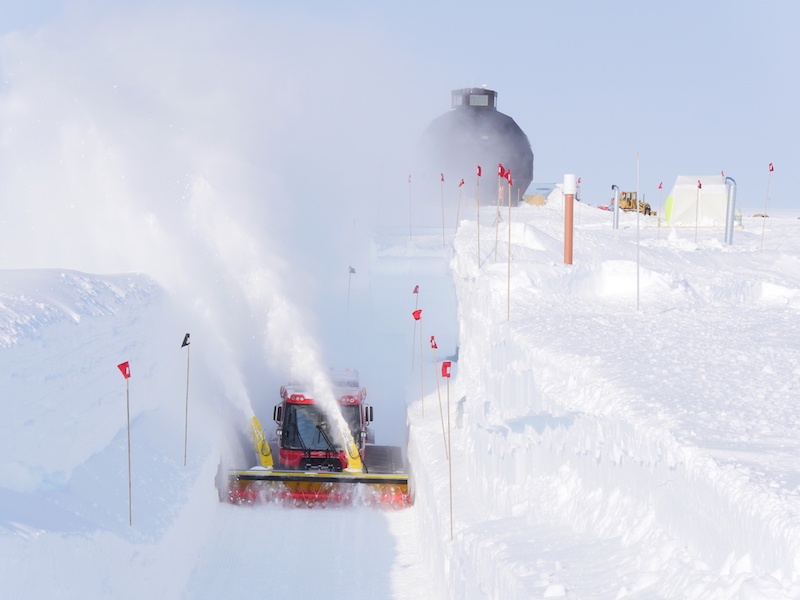 Massive balloons, up to 40 meters in length are then laid down in the trench. The balloons are inflated, giving the shape of the soon to be arched tunnel. 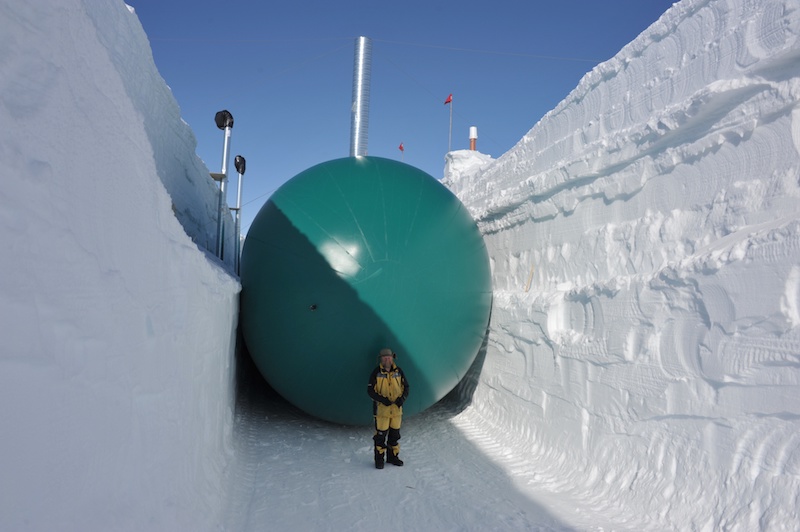 Once inflated, snow is piled on top of the balloons. The balloons serve as a placeholder for the cavity of the tunnel. They take on the shape of the tunnels, holding the snow in place until it solidifies and becomes structurally sound. Finally, the balloons are deflated and are extracted from the tunnel, leaving behind a hollow snow tunnel for researchers to travel through. Only the access balloon is left to protrude from the surface. 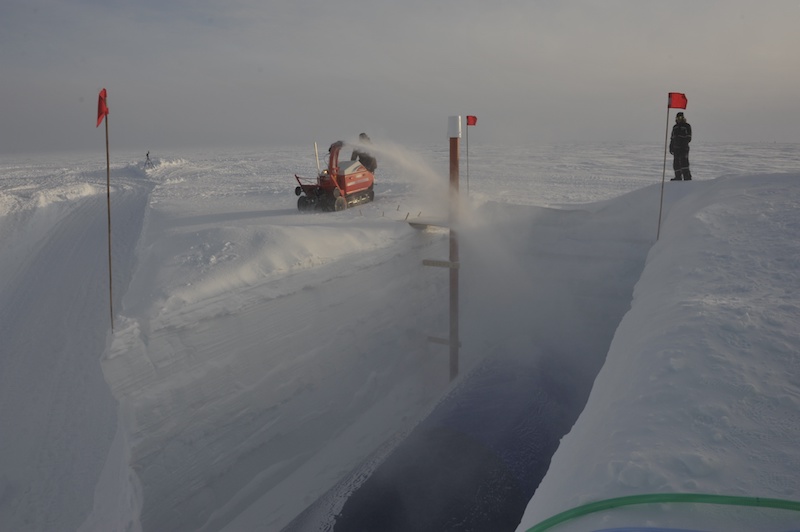 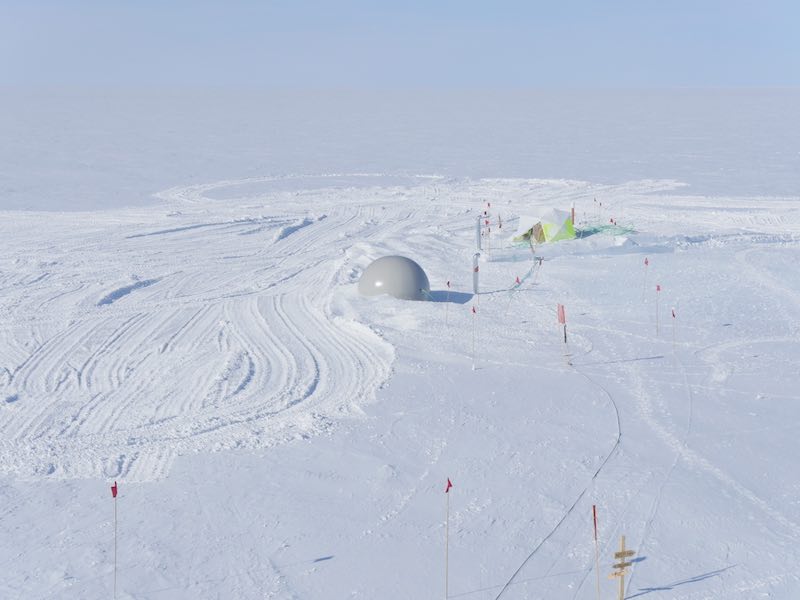 Only the access-hole balloons peek over the surface of the snow. The rest remains buried until the snow solidifies. [Image Source: East Greenland Ice-Core Project]

The balloon snow tunnels cannot hold large equipment or labs which operate far above 0 degrees for obvious reasons, so there is still a necessity for buildings made of other materials. However, the balloons offer a few other benefits. First off, they are significantly lighter than building materials which would otherwise be used to support the roofs of the trench. Their cylindrical structure also makes an arch, making the tunnel stronger than rectangular designs. Moreover, the balloons can be reused to make more tunnels. Instead of leaving behind the skeleton of a research facility, the balloons can be easily brought back and the snow tunnels can be abandoned without leaving behind any foreign material.

Researchers claim the tunnels are surprisingly strong and can easily support the weight of snow on top. In fact, as the snow accumulates, the structure becomes more compact causing it to morph into an ice block, counter intuitively strengthening the tunnel.

The snow tunnels built by large balloons are the happy marriage of technology from modern advancements and the re-adaptation of ancient techniques. The tunnels are a step back into the right direction and will hopefully see a more extensive use for other operations.