Rocking Chair Knits A Hat While You Rock 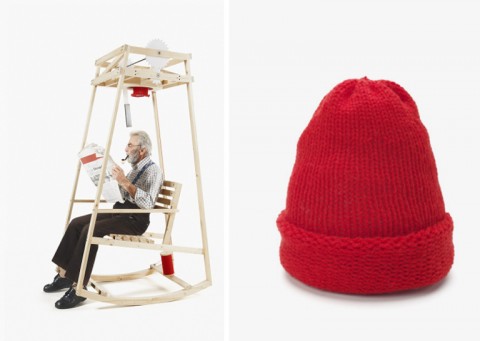 Have you ever returned from a hard day at work and just wished something could magically create itself while you settled into your favorite rocking chair? How about sitting in a rocking chair while you read or text on your phone and then have the resulting energy turn into something material without you having to do anything extra? Also, have you ever wanted to knit a hat but didn't want to spend all the time and energy doing so? How about a rocking chair that knits you a hat while you rock in it? Sounds absurd, right? Well, not anymore.

A rocking chair that knits you a hat while you rock has just been unveiled. It's called the Rocking Knit chair and it uses the kinetic energy created by your rocking motion to knit a yarn hat. The chair’s back and forth motion turns gears in the frame above your head, thereby activating the low-tech machinery that draws yarn up from a spool beneath the seat. It then moves the knitting parts to mechanically knit the hat. It truly is a natural knitting machine that has a zero carbon footprint. I wonder what other contraptions can be created using these basic kinetic energy converting methods?

The Rocking Knit was created by Lausanne Damien Ludi and Colin Peillex, who are students at the ECAL University of Art and Design in Switzerland. They revealed the multitasking rocker at ECAL‘s ‘Low-Tech Factory’ exposition during Designers’ Saturday in Langenthal, Switzerland. The students who participate in this exposition explore self-sustaining manufacturing processes and generally let their imaginations run free while designing their creations that span from cool to wacky. Self-production, auto-production and notions of time are central themes at the Low-Tech Factory. Special emphasis is placed on the creation of sophisticated but simple machines that create both an experience and a material good. Rocking Knit is one of six current design projects at the Low-Tech Factory. Another design called "Swing" involves a bag being made after a person gyrates on top of a large plate that cuts out material.

The Designers' Saturday event began in 1987 in Langenthal and is an international meeting point for the design world. It is not a trade show with characterless products, but rather a stage where authentic and unusual designs are put on view for the world. The Rocking Knit definitely fits into the "unusual" category.

While Google advances its DeepMind technology and we are constantly being bombarded with high-tech advances in various fields at a dizzying rate, let's not forget the beauty and subtleties of low-tech creations. Low-tech innovations have a tendency to relax our mammal brains and make us enjoy our few remaining unplugged moments in the day. I believe there is an important place for low-tech creations.

Leah Stephens is the author of Un-Crap Your Life. She's also an artist, experimenter and founder of Into The Raw. Follow her on Twitter or Medium.