These Thieves Managed to Steal $590,000 Worth of iPhones From a Moving Truck When you think of dangerous highway heists, the first scenes that pop into mind is probably those out of Fast and Furious or from Grand Theft Auto. Robberies of this nature is not an everyday phenomenon that's why they become a viral sensation when they are proven to be non-fictional. And that's exactly the case for the five Romanian thieves that were captured by the Dutch Police last weekend. The robbers were caught by a helicopter police stealing cargo from a speeding truck. Along with the thieves, the Dutch authorities also encountered a large volume of iPhones amounting to around $590,000.

Since 2015, the Dutch authorities have been investigating a group of Romanian thieves who have been stealing goods or cargo from speeding trucks. And it was only last weekend when the Dutch Police managed to arrest five of the thieves suspected of the dangerous heist. The Romanian thieves were arrested in central Netherlands where police have retrieved boxes of iPhones amounting to around 500,000 Euros or $590,000. 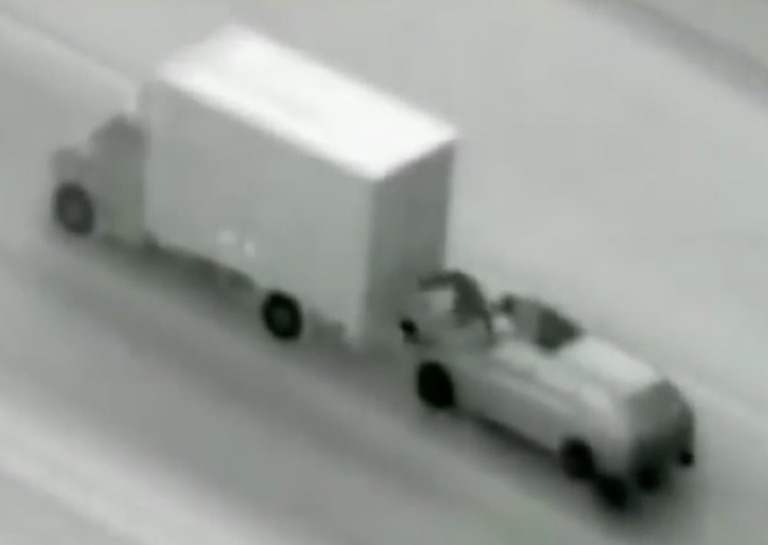 At the beginning of their investigation, the Dutch authorities were initially skeptical about the whole heist scenario but obtaining the footage evidence, filmed by a police helicopter in pitch-black, of the gang's recent activity confirmed their suspicions.

"The truck was taking its freight from A-to-B and did not stop", said Ed Kraszewski, a police spokesman. "Even so, (the phones) were gone. So it must have happened that way. And now we finally have the evidence, with the van and the loot".

The Dutch press refers to the robbery stunt as the "Romanian method". From the recorded footage of the heist, the robbers begin the dangerous stunt by approaching a speeding truck aboard their getaway van. Once the van is at a tailgate distance to the truck, two of the thieves would crawl out from the sunroof of the vehicle and slowly make their way on top of the hood. They would then crank open the truck's locked doors and start transferring the cargo into their van. According to the authorities, the Roman thieves primarily opted for trucks that are in possession of expensive electronics.

Out of the 17 known speeding truck robberies, only 5 of them took place in the Netherlands. The other unbelievable highway heist happened around other parts of Europe. Other sources reported that the suspects will appear before an investigating judge today in the Netherlands.

Dutch authorities have fingerprinted the thieves and will circulate the data to their European counterparts to identify if they've been involved in other robberies and crimes. The Romanian authorities may request for the thieves to be extradited when they are proven to be guilty of other crimes across Europe.

More Stories
innovationZapata will give 25 people the chance to fly his JetRacer craft for the first time
Loukia Papadopoulos| 8/14/2022
scienceInside the discovery of the largest bacteria ever found
Grant Currin| 8/7/2022
diyYouTuber builds a bike with two half wheels, and it functions just as well as the original
Loukia Papadopoulos| 7/3/2022