The Great Mosque of Divrigi goes beyond being a mosque. Its architecture stuns as an enormous hypostyle (or pillar supported) complex. It includes a hospital under a charming tomb, decked out by significant Islamic geometric patterns.

The building, known as a "darusshifa," served as an Islamic hospital. It was built in the Sivas Province in central eastern Turkey in the early 11th century. The remarkable building contains unbelievable samples of Islamic art, with fascinating geometric patterns. These patterns combine, interlace, and duplicate in intricate combinations. Calligraphy adds to its architectural beauty. 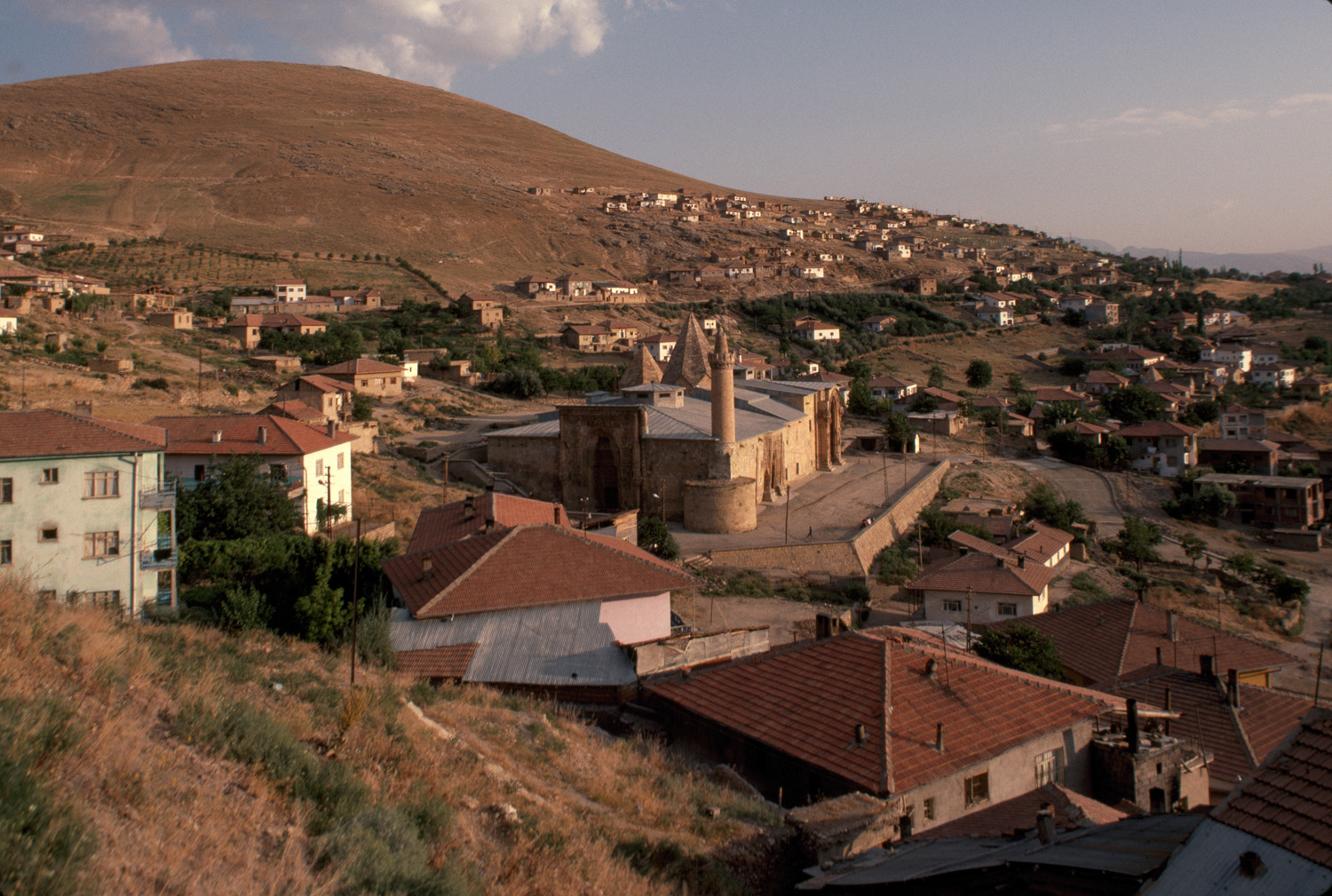 The complex of the Great Mosque of Divrigi was founded by the Mengücekide Emir Ahmed Shah. The hospital was later founded by his wife Turan Melek Sultan. Construction took place during the Anatolian Seljuk period and built by chief architect Hürrem Shah between 1228 and 1243.

The prayer niche, called "mihrab," sits inside a hexagonally pointed dome. The elaborately carved stone portals run north and west. There's a cupola placed over the center of the prayer hall.

Inside, four rows of four piers create five naves roofed by a diversity of intricately carved stone vaults. This highly sophisticated technique and exuberant type of decorative sculpture are the unique features of this masterpiece of Islamic architecture. The variety of the carved decoration shows that was made by different groups of craftsmen. 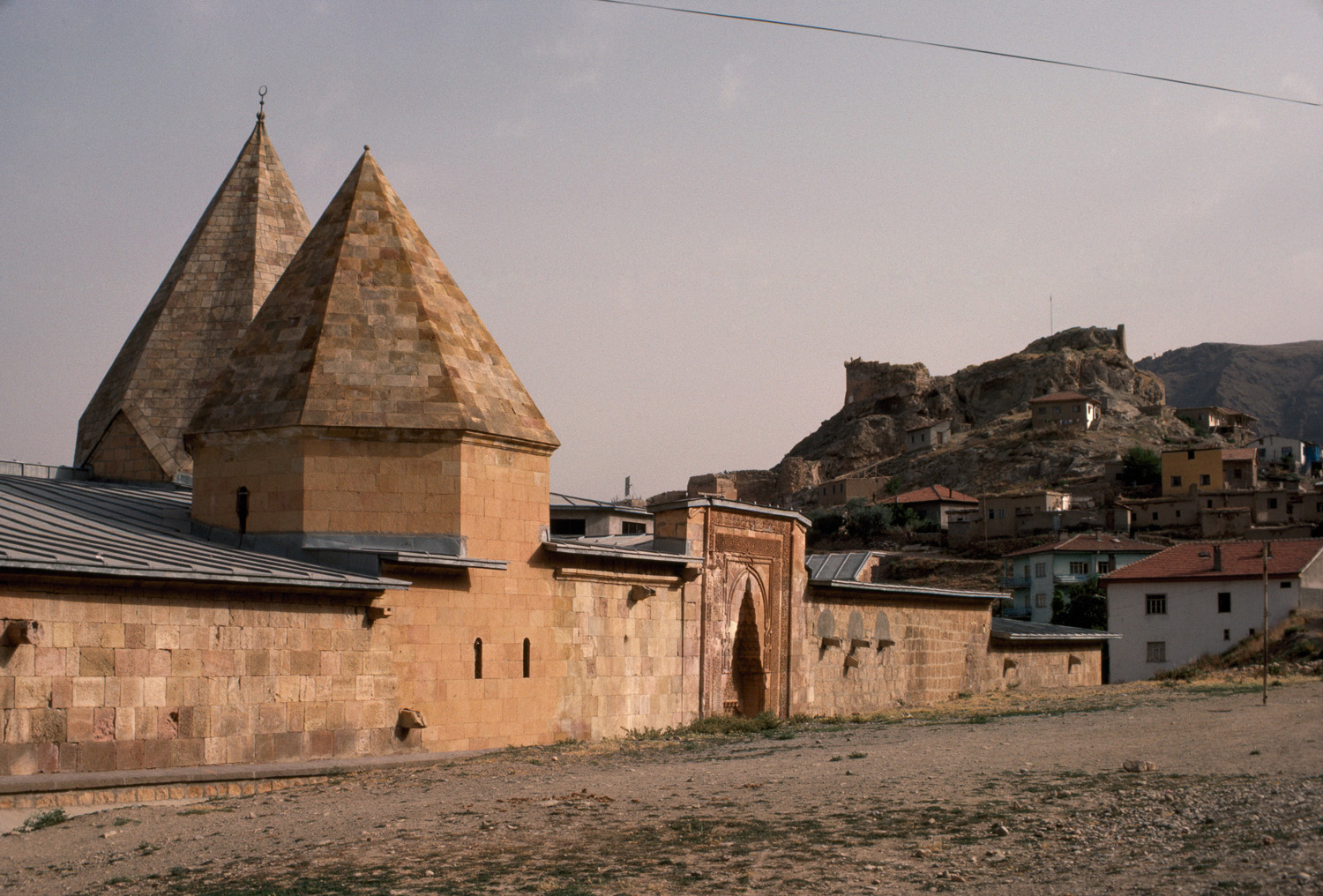 The main characteristic of the designs featured in the portals is their uniqueness. All bases, portals, capitals and shafts of the columns, and the inner surface of the dome and the vaults were decked out in a different style. 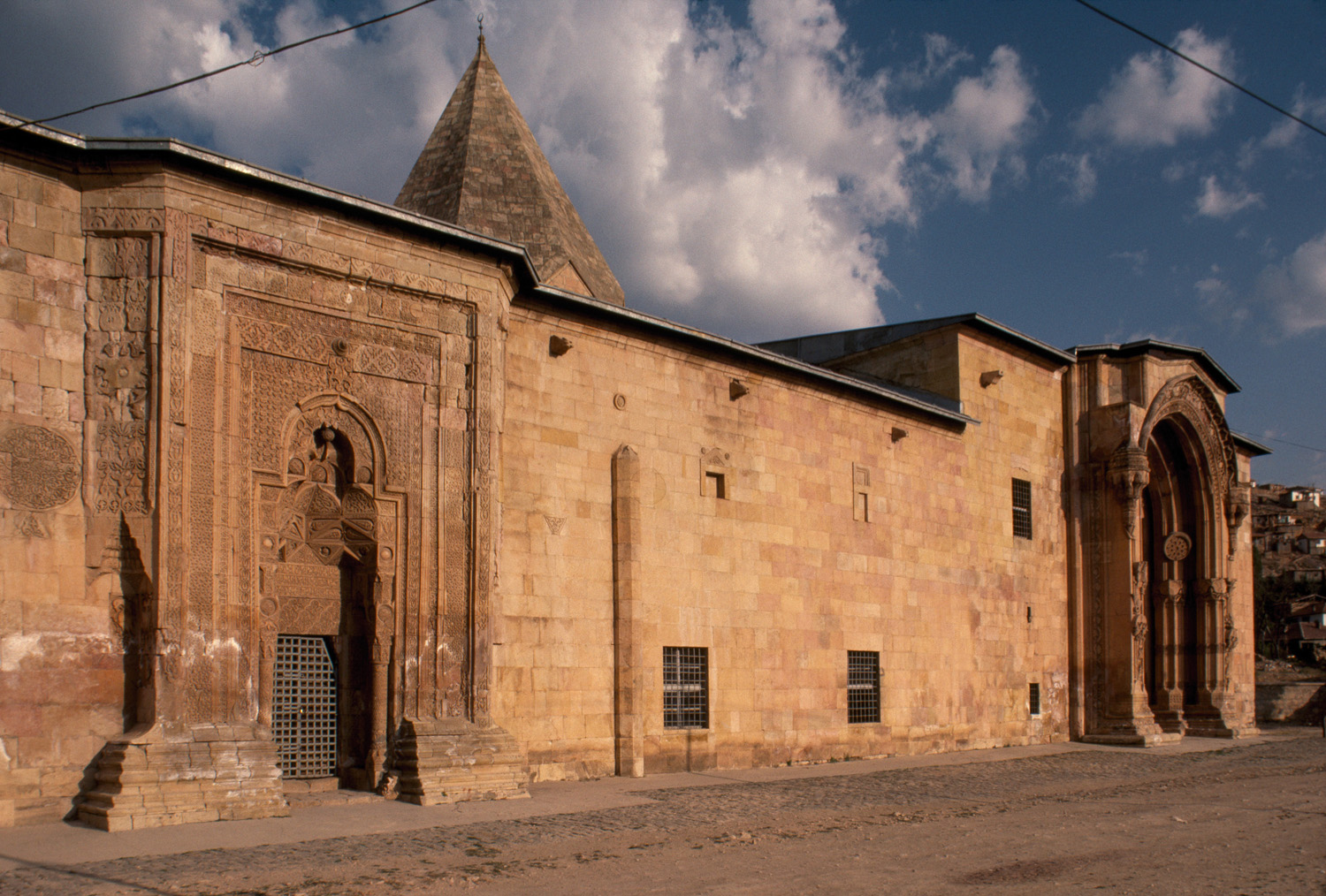 The dome of the hospital room is comparable in scientific achievement to that of the prayer hall. It shares the magnificent unity of the Great Mosque. The amazingly creative patterns of the decorative relief of the columns and portals reveal the delicate stonework done by Georgian artisans from Tbilisi and Ahlatian craftsmen. 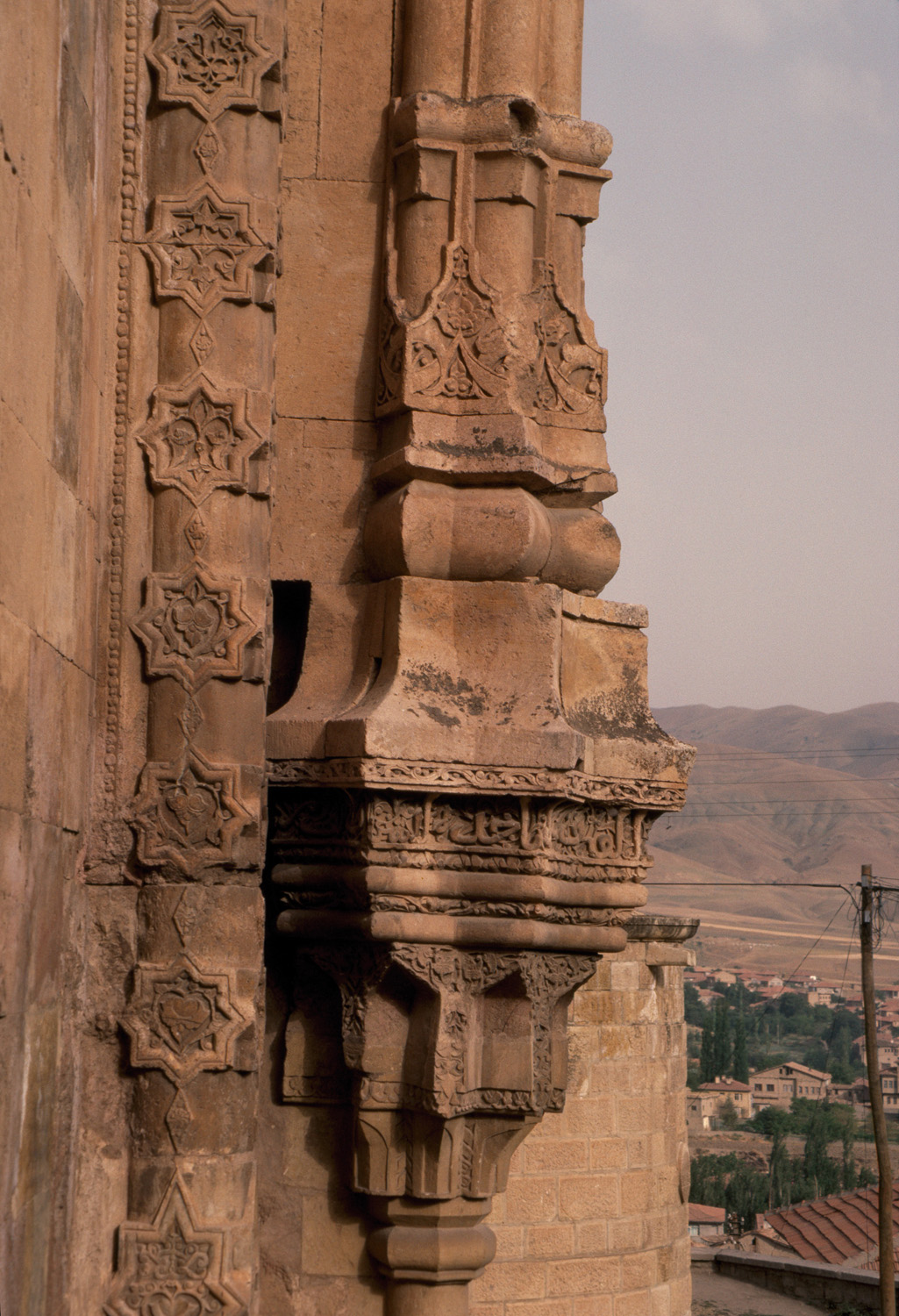 The use of light and shadow adds to the popularity of the architecture. 3-D ornaments on the entrance cast a giant shadow of a man praying. That shadow changes pose as the sun moves to emphasize the building's sacred purpose.

As with all other unique details, the decorative sculptures seem symmetrical when viewed from a distance and angle. However, they are in fact asymmetrical.

Moreover, none of the thousands of unique designs get repeated. 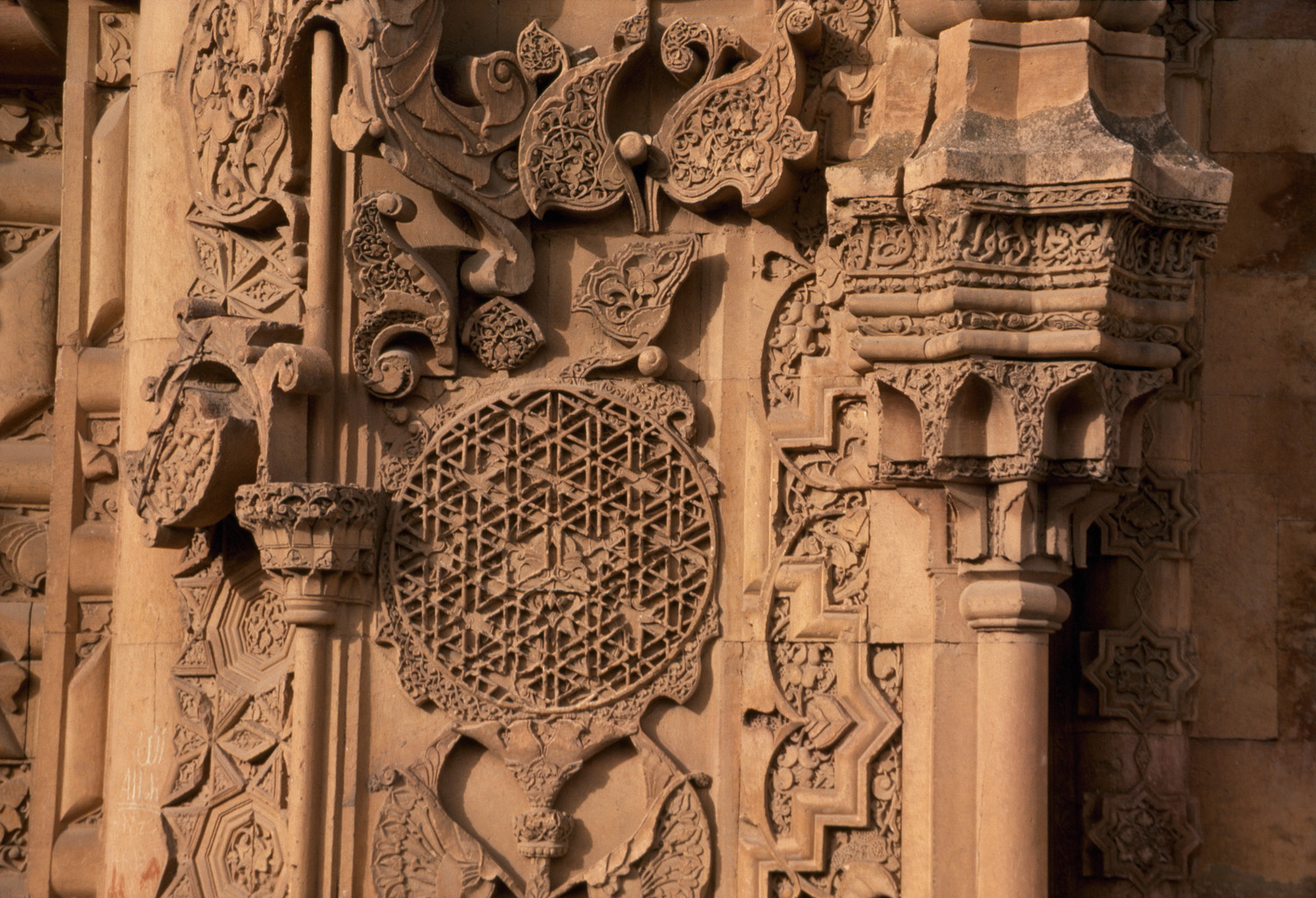 Geometric ornamentation in Islamic art proposes an extraordinary amount of freedom. In its complexity and repetition, it offers the possibility of infinite growth as well. In terms of their repetitive motifs, abstractness, geometric patterns and symmetry, the complex has a harmonious decoration.

This seemingly unified disunity has placed the mosque top on the list of the world’s great monuments. 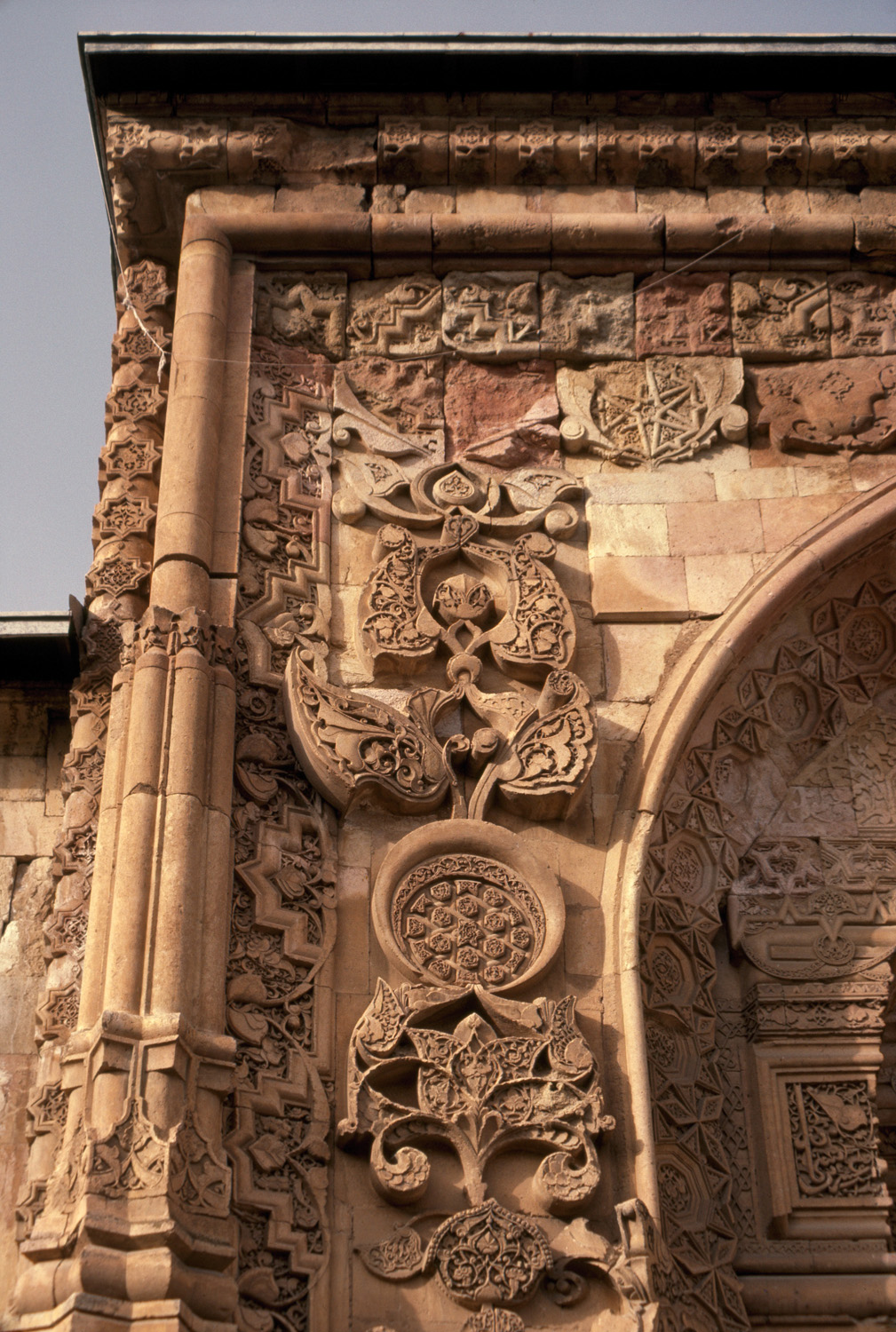 UNESCO added The Great Mosque to its World Heritage List in 1985. Admirers described it as “The Alhambra of Anatolia” and “The Miracle of Divriği” for decades. 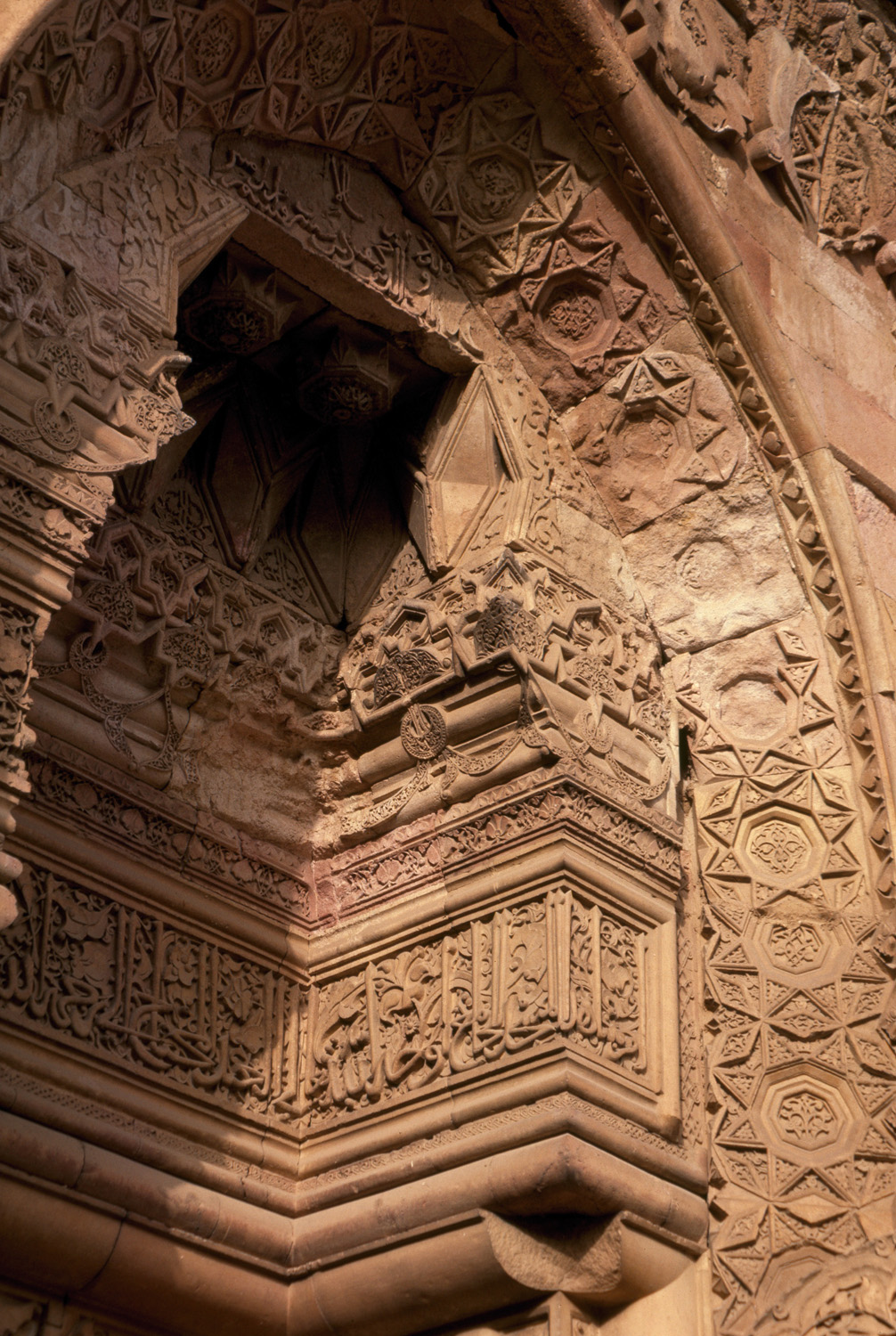 To get further information about the monument, check out Oya Pancaroğlu's book The Great Mosque and Hospital of Divrigi here.