If you buy a guitar then you will be purchasing the same guitar that millions of people around the world have bought. Your only other option has been to pay out many thousands of pounds to have a guitar custom made. That is until now. Thanks to 3D printing technology a custom made guitar comes as a fraction of the cost that it used to do, courtesy of  Customuse. 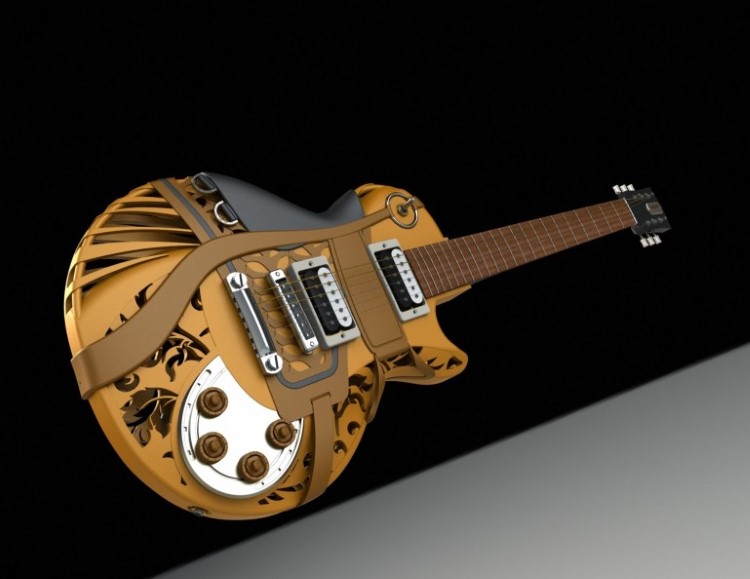 The founder of the company got the idea for his company after his girlfriend had been unable to find an affordable customised guitar for him as a gift.

"I always had a passion for 3D printing, so when we were discussing the issues with the high cost of personalization of guitars due to inefficient manufacturing processes, I had one of those AHA moments," he said. "It all became clear; why not use the latest technology? That is when we came up with the idea to make personal, unique and affordable 3D-printed electric guitars." 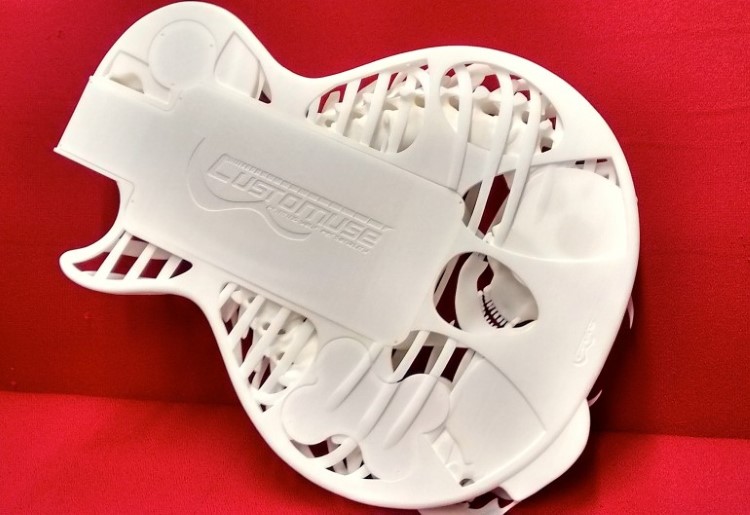 However, not all parts of the custom guitar are printed in 3D. The body of the guitar is 3D printed and then wrapped around CNC machined tone wood block. This allows the neck of the guitar to be made of wood and the rest of the hardware, including the bridge, tuners and pickup, just as you would find them on the typical store bought guitar. 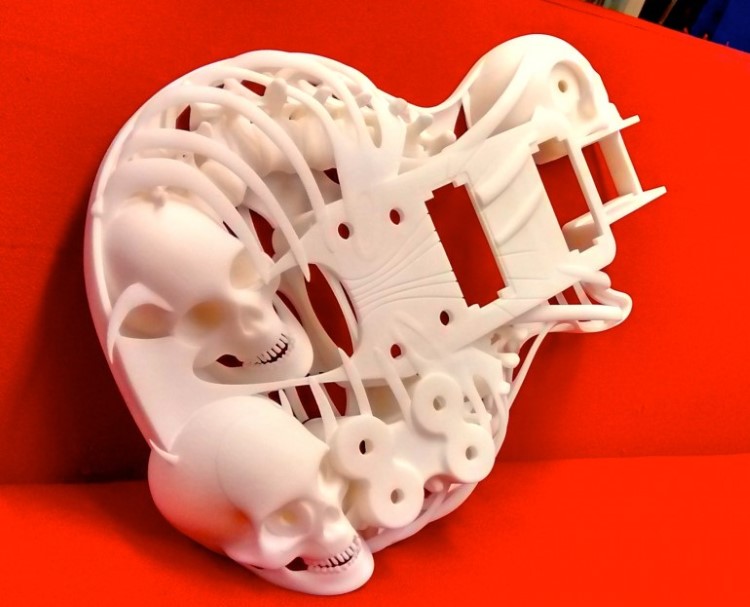 Hosseni said "We use the state of the art SLS (Selective Laser Sintering) machines with very large print-beds. This allows us to print our guitar bodies in a single piece using nylon 12 powder; hence creating a much more robust and resonant structure in comparison with other 3D printing technologies. The outcome is a very solid body with a smooth finish especially on the rounded edges. In the future, we aim to create a more available alternative for younger players using a more affordable FDM (Fused Deposition Moulding) process. However, this method has its limitations and the final outcome would not compete with the current SLS models." 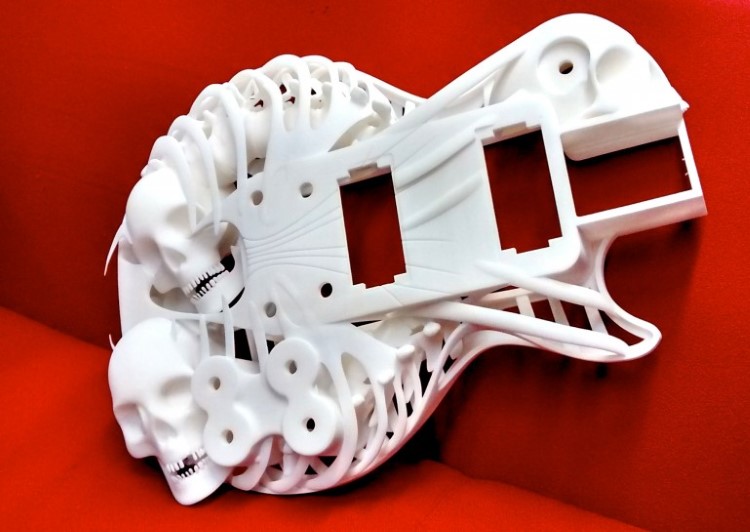 At the moment, Customuse offer three version of the guitar in pre-designed models, with two of them having being 3D printed. The Tele-shaped Sunrise had a 25.5 inch scale American maple neck that comes with a fingerboard made from rosewood or maple. It offers two Seymour Duncan Alnico II Pro pickups, along with master volume and control knobs, with Grover Mini Rotomatic inline tuners and a wraparound bridge. 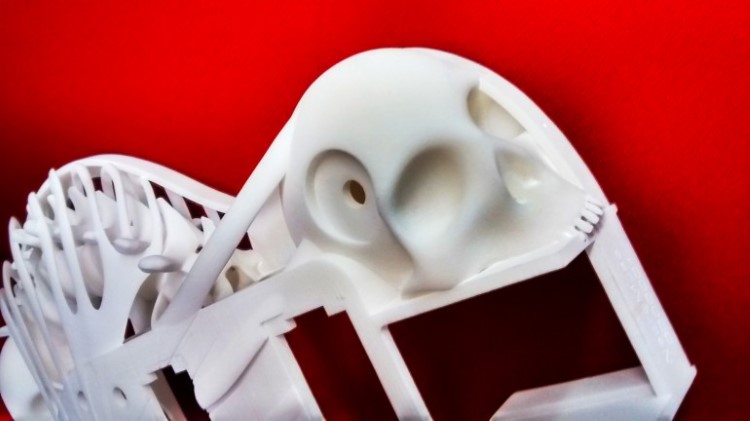 The Necromuse guitar has the 24.75 inch scale mahogany neck along with the rosewood finger board. It comes complete with Seymour Duncan Alnico II Pro pickups, a standard bridge and tailpiece and Grover Mini Rotomatic tuners.

There is also the RodeoMuse; however this guitar hasn’t been printed in 3D yet. When it has been printed, it will feature the 24.75 inch scale mahogany neck complete with a fingerboard of rosewood, chrome/golden Grover tuner, Seymour Duncan Alnico II Pro pickups and the standard bridge and tailpiece. 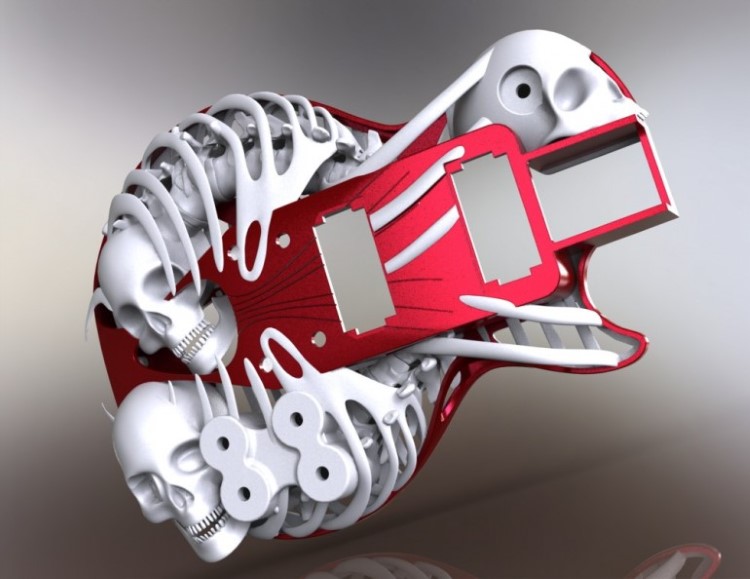 The company are offering the 3D printed guitars at their Etsy store; you can get one for around $1, 500. 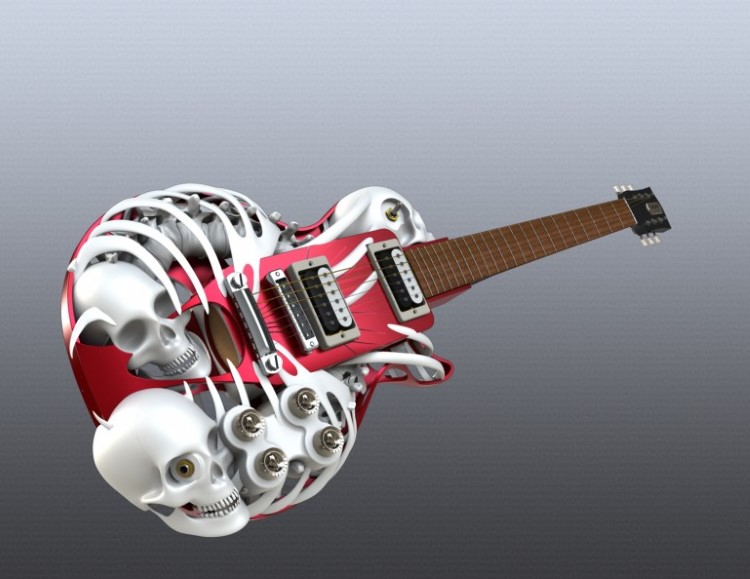 Customuse is still in the process of building their online platform. When this is completed it will allow people to build custom guitars that can be 3D printed. Customers will be able to choose tone woods along with picking out the hardware for their guitar.

The company plan on offering people the option of choosing the shape they want along with the template. Customers can also choose their own colour schemes and pick from what is said to be an extensive list of hardware stock components. The guitar is then printed and delivery takes around two weeks. 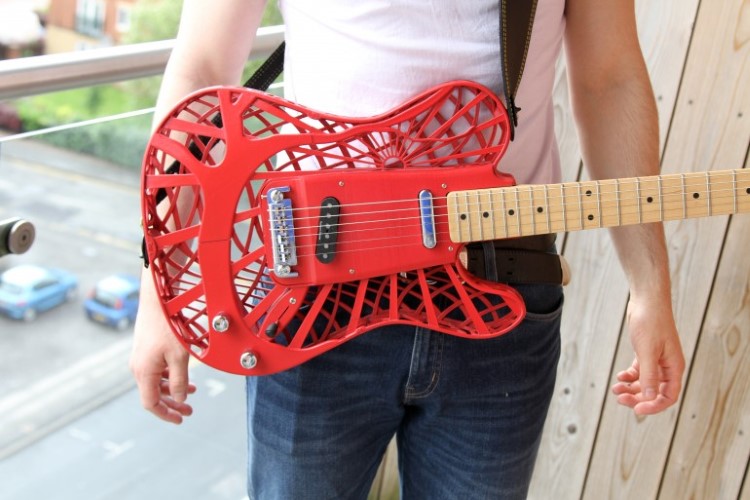 "We allow customers to choose a tone wood that best matches their special tone," explains the company's founder. "For example we suggest mahogany or walnut for players who favour a warmer darker tone; and ash for a brighter result. If a player chooses to use our standard specs, we will fit the guitar with a tone-wood that we believe matches the pickups and the character of that particular model. We also use the same dimensions for all our wooden centre block (with the exception of Sunrise) this means that the customers would be able to purchase a Customuse guitar today and change it into another guitar of a different shape later by ordering a new body."

The customised build platform should be in place by November. Custom guitars will start with a price tag of around £1, 500 and go up to £2, 000. A premium service is being planned and this allows the customer to meet with the designers at Customuse and design and build their own personalised instrument and this service will have a price tag of £5, 000 in total.