Youth is the most enjoyable part of a human life. Your brain is open to learning everything, ready to pay attention to the world and communicate, but being a student is a big responsibility. You have to learn many things in a short time, as much as you can, and stay focused in class as long as you can. One 8th-grade teacher found a way to keep her students focused in her math class, by cycling.

Bethany Lambeth, is not an old-fashioned teacher. She is actually into finding new methods of learning and teaching as we can see on her blog page. She is trying new things to get her students attention, and teach in new ways. So she installed cycling machines under their desks.

The youngsters are full of energy and this energy makes it hard to focus on one thing. Of course, math is always not everyone’s cup of tea. For some of the kids, it’s a struggle to stay focused, but Bethany is smart and knows how to reach them. She found a way to make the learning process in such a healthy and scientific style, cycling. 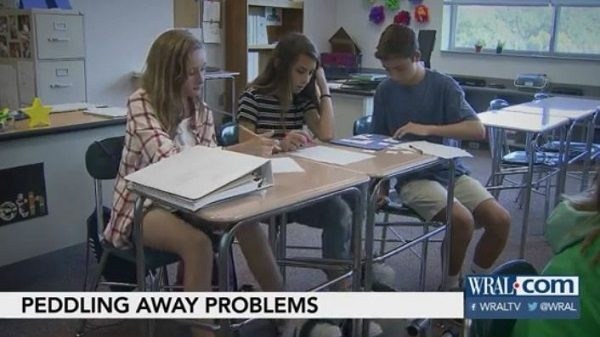 She got positive results in a short time, as she explains. After she installed the cycling machines, the students stopped messing around, going to the bathroom to get some air and stayed focused, which was her goal.

“Before, they were drumming on their desks, they were touching other people, and they don’t do that anymore. Their feet are getting the movement out. There has been a huge increase in the quality of our student’s work and a decrease in the amount of missing work…”

Wake Country teacher Lambeth, bought the cycling machines for around 150 dollars each. The purchase was funded by 4-C fund and donations, but if you compare it with the feedback she received, the machines are really priceless.

“(The kids) are not picking on each other, they are not needing to walk around, they are not needing to go explore, they are able to get their activity out and get their work done. I think the world is changing a lot and the kids need to be able to do something different. What we’ve been doing is not necessarily working.” Says, and one of her students, Sofia Fedele takes the word; “I usually tap my feet and stuff…just because it keeps me focused, but (pedaling) keeps me exercising and focused,” she told WRAL.

Cycling is increasing the concentration

Actually, Lambeth’s idea is based on a scientific research. According to Medical Daily, “Researchers say that cycling or walking to school can be a great way to increase concentration during the school hours. The study from universities in Copenhagen and Aarhus found that children who were driven to school or used public transport scored less in tests that measured concentration than children who walked or cycled to school.”

So let them cycle, let them learn easier.