German motor vehicle manufacturer Daimler just came out with a fleet of self-driving snow plows for airports. This reveal just might steal the thunder of Tesla's electric Semi Truck.

Amid all the hubbub surrounding the delayed debut of Tesla’s electric semi-truck, German motor vehicle manufacturer Daimler AG has decided to debut its autonomous and driverless Mercedes-Benz Arocs snow trucks. The time of total automation is closer than we think.

The industrial vehicles work by following the leader truck, which moves along GPS pre-mapped routes. The Arocs fleet is networked via encrypted radio signals, with a control panel in the leader vehicle. Importantly, each truck is interchangeable, meaning there isn’t one sole leader, they can all be at the front of the convoy at any given time.

Safety-wise, these trucks are designed for circumscribed areas and have built-in emergency safety measures leaving room for hazard management—meaning the vehicles will be able to identify something in their way. An important feature, especially at an international airport which is full of constant activity and barriers in the form of personnel, luggage carts, fuel trucks, people eaters and more.

"We are not just talking about new technologies; we are bringing them onto the road. Step by step we are developing our very latest assistance systems even further – with a view to automated driving,” says Martin Daum, an AG Board of Management member for Daimler Trucks, as reported by Tech Crunch.

"We are currently working on the implementation of two specific use cases: Firstly automated driving in quite normal traffic on motorways – with the clear aim of relieving driver workload and significantly improving safety. And secondly, driverless operation in enclosed areas to significantly improve productivity. With today's demonstration of automated snow clearance on an airfield, we are once more reinforcing our claim to technological leadership." 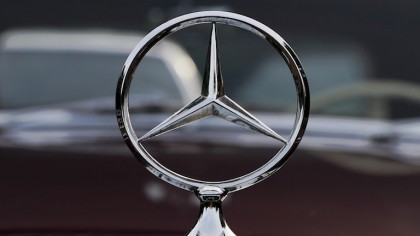 Called AAGM (Automated Airfield Ground Maintenance) the project utilizes four Arcos tractor units to automatically clear runways. Daimler claims this is a better option than manned vehicles since the Arocs will be able to predict and plan when to clear an airfield much faster than human operators who rely on staff schedules. Daimler collaborated with Lab 1886, the Daimler innovation incubator, and Fraport AG.

Fraport AG is a German transport company which operates Frankfurt airport as well as interest in several other airports worldwide. In a statement, they imparted their excitement about the efficiency the Arcos fleet could bring to a tarmac covered in snow.

“As one of the first airports worldwide, we are pleased to be contributing our know-how to this innovative project,” Mathias Dudek, head of Infrastructural Facility Management at Fraport AG, said. “It enables us to examine the autonomous control of heavy winter service equipment in the especially challenging winter conditions of an airport.

We hope to obtain findings that will help us to plan the future deployment of equipment even more precisely and efficiently under sudden wintry conditions. Our commitment once again underlines the role of Fraport AG as an innovation driver in a wide range of areas.”

The aim is to implement this technology into other service vehicles in hubs like airports. Mail delivery, waste disposal, even grass cutters are on the table to be autonomized.