Daimler Trucks announced that within 10 years, it will have fully autonomous semis on the road.

The world is still fairly fearful of autonomous cars taking over the roadways. Whether it be the automotive enthusiast who enjoys driving their own cars or the everyday person that just want’s to be in control, fully autonomous vehicles, level four autonomy, seems pretty far off.

Vehicles that can drive themselves without any input from the driver is the end goal for nearly every automaker currently involved in the sector.

While the recreational industry may be slower going, one sector of transportation that seems poised to turn fully autonomous is trucking.

And Daimler thinks so too..

At CES 2019 this year, Daimler’s trucks and buses division announced that the company was planning on investing 5.7 million dollars into the R&D of level four autonomous trucks.

Announced through the mouth of CEO Martin Daum, the automaker plans to begin testing in the US in 2019 to facilitate full functionality by 2030.

Championing this push to make trucking autonomous is the idea of safety. Daimler believes strongly that their autonomous trucks will be able to be more efficient and safer than any human-controlled vehicle on the road right now.

They would also allow for added interconnected communication which could reduce traffic on roadways.

Trucking is a dangerous industry, taking the lives of about 4000 people per year in the US, most being other drivers on the roadway.

All this leaves some major room for improvement with autonomous trucking tech.

Daimler is also very aware that everyone in the public isn’t convinced about self-driving vehicles, which is part of the reason they’re giving themselves a decade to do it. They believe that in this time they’ll be able to convince the public that their tech is 100 percent road proof.

Ultimately, time is needed in order for autonomous vehicle OEMs to collect enough data to accurately ensure safety in their self-driving algorithms.

For those unaware, this announcement to focus on level four autonomy is actually a shift in focus for Daimler Trucks. 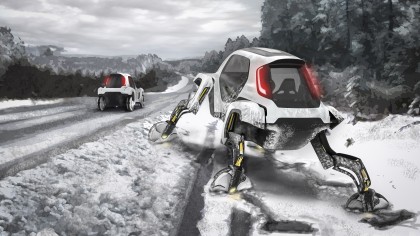 They were previously focused on Level 3 autonomous trucks that would link together and caravan to increase efficiency and safety. However, while a good idea on paper, they found in real-world testing that there were little efficiency gains and the travel method was often impractical.

Stepping back from future-forecasting for a moment, Daimler also announced at CES that they are rolling out their first level 2 controlled long-haul truck that has adaptive cruise and lane keep assist.

Production will start in July of 2019 and we should start seeing these trucks on the road by years end.

Collaborative Driving Not Autonomous Vehicles to Rule the Roads For Now