The reasons for dams failing stems from a variety of complications brought about by construction and nature.

Dams are among the many structures that demonstrate the technological capabilities of mankind. However, they are just as susceptible to destruction as any other.

A variety of reasons exist for the failure of dams across the world over time. Whether it’s because of the elements of Mother Nature or the lack of stability in the components of the dam, these structures can buckle under pressure.

With error comes education, and the failures of dams over the years can give us the ability to change the way these structures are built so that we don’t repeat history.

Here, you will learn about the function of dams, common reasons for failure, and what is and can be done to keep them from happening again.

Before we go over the reasons for dams falling apart, we must first understand their purpose and how they work. Dams have multiple uses, among them being storing water whenever there is an overflow in a river. The other is to raise the water level upstream so that canals ahead aren’t left dry and there is a balanced surface level between nearby bodies of water.

Storing water and managing flow provides dams the ability to generate electricity for themselves in addition to households and industries. Water is made available for agriculture, and keeping flows steady prevents nearby towns from being flooded.

Dams also come in handy for having a fun time, as storing and releasing water makes it possible for people to catch fish in reservoirs, take the family out a boat for some lunch and drinks on the water, and go whitewater rafting down tougher canals.

However, there are several factors that can get in the way of managing waterflow.

Overflows of water can cause the walls of dams to erode over time, especially if the area is susceptible to rain and floods. John France, National Dam Practice Leader at AECOM and member of the American Society of Civil Engineers, noted that dams made of earth need to have their design monitored on a regular basis in order to function over the span of years.

“When people think of a dam they often think of a giant concrete structure, like Hoover or Coulee Dam, but the vast majority are made of earthen materials.”

“When people think of a dam they often think of a giant concrete structure, like Hoover or Coulee Dam, but the vast majority are made of earthen materials,” France says.

Being made of earth makes such dams much more likely to experience issues with their inner workings. The pipes have less protection from water, thus having a higher chance of eroding. An overflow can cause the clay blanket to swell and break, letting water through the front wall. Drainage is also unable to function properly the more water is let inside.

Government officials pointed to erosion as a major contributor to the destruction of the Patel Dam in Solai, Nakuru several months ago. The dam, which was built in 1980, was originally designed to take in 2,500 gallons of water each day to use domestically, as well as 40,000 gallons each day for cleaning, irrigating coffee and other purposes.

However, officials noted that 72 million liters of water poured out and destroyed property in neighboring villages, as well as killing tens of people. The overflow of water led to erosion in the walls that were built around the dam, and the walls could no longer keep up with rainfall and other sources of additional water.

“The water capacity of the dam could have been breached leading to the tragedy,” Civil Engineer Grace Kagondu said at the time.

The stability of dams depends on how the land in the area has changed overtime. The more the state of land changes, the less likely the ground will be able to absorb water and have it run off in a way that benefits the dam.

Norbert Delatte, Professor of Civil Engineering at Cleveland State University, stated several years ago that the amount of water the dam needs to hold back will determine how much it will be able to withstand heavy loads. 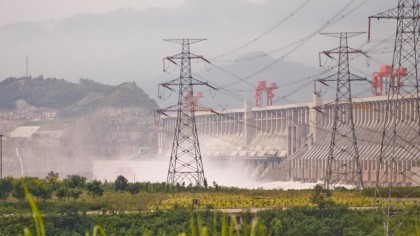 The use of land plays into this because while the majority dams in the United States are surrounded by forests that can absorb heavy rainfall, they were built decades ago. The construction of houses, farms and other forms of development overtime makes it easier water to runoff into dams.

Changes in the way the land is used can affect the stability of the dams themselves. Some dams have shallower footing than others, which can lead to a weaker foundation that had more trouble with heavy rainfall. If more facilities were constructed in the area overtime, the ground leaves more room closer to the dam for water to get inside and slowly erode the foundation.

Being made of earth doesn’t help with dams’ ability to avoid erosion from shifts in land use, either, and the soil near the foundation adds to the material that can be subjected to erosion.

Even if dams have been subject to frequent maintenance, we can only be prepared so much for what Mother Nature can throw at us.

Rainstorms come in all sizes, and some come with more water to offer than are expected, as well as more than what our dams are prepared to handle. Excessive rainfall is among the main contributors to overtopping, which often leads to the overflow issues that lead to erosion, pipe breakage and other problems that we previously mentioned.

The addition of wind, thunder and lighting can lead to debris blocking spillways and even falling onto the dams, if they are close enough, thus leaving an extra opening for water to get inside.

An abundance of rainfall in a short period, such as a couple of days, can be a problem because it can lead to too much water flowing through the dam at once.

David Adede, a geologist, pointed to this situation as a possible cause for the Patel Dam’s destruction.

“Dams are just, naturally, walls built on a river to stop water at that point,” Adede said. “At the point of heavy rainfall, it is possible for this wall to be breached, even more so in cases of earthen dams.”

Hurricanes and other disasters that come with heavy rainfall can be enough of a problem for younger dams, but older dams that have not received enough maintenance can be in even more trouble. Floods that come from rainfall can also lead to land breaking apart, which can cause destruction to dams by acting as debris and furthering erosion.

Several moves have been and can be made to avoid dam failure, preserving the lives of many in the process.

One way to reduce the risk of failure is through the construction of the dams. Switzerland’s Contra Dam, for example, has two spillways at each side so that more water can be discharged during heavier flows.

The Gordon Dam in Australia can also deal with heavy pressure with the design of its structure, which is curved both vertically and horizontally. America’s Hoover Dam can hold and distribute water thanks to multiple turbines and diversion tunnels in the canyon walls.

When it comes to keeping water from overflowing due to changes in the use of the land, planting trees in certain areas around dams can provide alternative routes for the water to take.

“We can be highly effective at reducing flood risk by anticipating and working with nature rather than trying to defeat it,” advises Giulio Boccaletti, Global Water Director at the Nature Conservancy.

With these methods, we can reduce the chances of dam failure, allow for stable water distribution, and keep people safe in the future.

Engineers Develop Tube Fishway to Get Fish Over Dam Walls