DataView VR: The Workspace of the Future

A Virtual Reality-based workplace that provides data analysts with insight into complex data, improves productivity, and facilitates virtual collaboration is now a reality.

If one cold, rainy winter morning you wished you could instantly teleport yourself from your home to the office, avoiding a long commute in packed public transport or wasting precious time stuck in a traffic jam perhaps your dream comes true thanks to a combination of Virtual Reality (VR) and Artificial Intelligence (AI) technology. Their combined power creates the workspace of the future with advanced AI-driven model building tools. 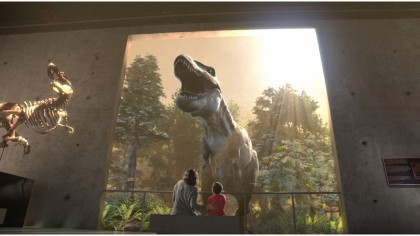 This instantly gives you the ability to save multiple versions of your desktop to toggle between during your workday, or depending on your project. You can even invite, and easily interact and collaborate with all your coworkers in your VR work environment.

You only have to make ready a big cup of your favorite morning coffee, -real, not virtual- and your dream can be real. The technology is already available today.

According to Andy Maggio, Founder and General Manager at DataView VR, this is the workplace of the future.

DataView VR, the company behind making your dream a reality, has developed the technology that makes virtual coworking possible tailored initially for the financial industry. Although DataView VR is primarily used by investment and data analysts for data visualization, the technology can be tailored and used by any industry.

DataView VR's parent company The Glimpse Group, is a Virtual and Augmented Reality company made up of a diversified portfolio startup companies in various industry verticals. The Group is led by veteran leadership executives with expertise in VR/AR, finance, and advanced graphics who mentor and work closely with the startups.

DataView VR is a comprehensive Virtual Reality-based workspace that has been designed with analysts in mind. It provides insight into complex data, improves productivity, and facilitates virtual collaboration. DataView's HyperDesk removes all the physical desktop limitations. At the same time, it brings team members together into the same workspace, saving time and money.

DataView VR provides over a dozen different and interactive screens with search tools. One of DataView's unique feature is that you can vusualize and interact with data sets in 3D. According to the company, you can fly over various charts or data "trees" to get a full picture of the information before you, something impossible to achieve without VR.

He prepared a quite interesting and colorful presentation about the United States 2016 election. For this presentation, (video below) he reviewed the voting data from all states and territories as immersive 3D visuals.

"The pupose of DataView VR is to facilitate deeper, faster analysis, and clearer, more powerful presentations while connecting people virtually from any location around the world." -- Andy Maggio, Creator and General Manager at DataView VR

The platform seamlessly converts 2D data into immersive, multi-dimensional and colorful displays. According to Andy Maggio, DataView is the next step in the evolution of analysis and presentation software.

"DataView's workspace of the future leverages Virtual Reality and Artificial Intelligence to provide both two-dimensional and multi-dimensional tools," wrote Maggio in an email to Interesting Engineering. "The purpose of DataView VR is to facilitate deeper, faster analysis, and clearer, more powerful presentations while connecting people virtually from any location around the world."

Anyone who needs to process and present a large amount of information, especially those working closely with complex data, can benefit from working with three to six-dimensional data visualizations generated by AI in a VR environment with remote VR connectivity.

Most office spaces are chaotic. Cluttered desks and full drawers. Hard to find space for your coffee mug. You begin to struggle to focus. Does it sound familiar? Now, imagine you put on a comfortable headset, you click on a button and is as if you were teleported into the future.

You are in a virtual world environment that is quiet and uncluttered. You are in New York City. The only things around you are 18 monitors with all the information you need. Using hand gestures, your real keyboard, and a mouse you can arrange and project the information.

Then, you want to show your conclusions to your colleague in London for some feedback and brainstorming. She jumps into your virtual office a minute later. You both can see your super-charged desktop display. You have a conversation about the content; she contributes some fresh ideas you could implement right away.

If you want to show her the predictive model you have created in your multi-dimensional workspace, you two can be floating above a forest in a matter of seconds. Each of the trees in the forest gives you six-dimensional information about a particular datapoint. The overall forest shows what drives both the main trends in your predictive model and the outliers.

Then, you load a new data set. DataView's Artificial Intelligence creates  multi-dimensional visualizations that you can move around and interact with. You and your colleague explore the data together. You get the job done. You say goodbye to your colleague and leave your virtual workplace.

According to DataView, you return to the real world armed with new insights from your hyper-charged productivity session in DataView. And who wouldn't love that! Now you can sit back and enjoy another cup of coffee.