Our ancestors were very creative people it seems, especially when it came to war. From parachutes to kite bombs, here are 5 ancient aerial weapons.

Ancient aerial weapons came in some interesting forms. From parachutes to kite bombs, man's ingenuity for making weapons of war seems to know no bounds.

The following 5 range from ancient times to Renaissance Europe. Some, long thought to be myth might have actually been practicable. The following are far from exhaustive and in no particular order.

First on our list of ancient aerial weapons wouldn't look too out of place today. In fact, the parachute is not a modern invention, it seems. Various efforts have been made throughout history but there is one notable example from 17th Century Venice.

In 1617 the world's first successful parachute jump was completed from a four-story building in Venice. The man behind the legend was one Croatian inventor, Fausto Veranzio. Veranzio was apparently inspired by Leonardo Da Vinci's concepts a century earlier, actually decided to improve on it, build and test one.

Fausto studied engineering and mathematics and served the court of King Rudolph II of Prague. He also befriended two eminent scientists of the day Tycho Brahe and Johannes Kepler.

His Homo Volans (Flying Man) design incorporated a lightweight wooden frame with fabric stretched over it. The parachute was successfully tested in his day but also recreated recently to test its viability.

Ancient Discoveries with the help of a leading skydiver, Ray Armstrong,  would go onto to test the replica. For safety, it was dropped from a hot air balloon. The test was very successful and was noted as being a smoother decent than some modern parachutes.

With the parachute sorted all 17th Century Venice needed was powered flight to have their very own paratroopers.

The Chinese appear to have invented the world's first 'cruise missile'. This ancient aerial weapon would have certainly caused terror on the medieval battlefield.

Thanks to the invention of gunpowder the Chinese were able to produce many devices including the 'Magic (or Divine) Flying Crow'. This was, effectively, an explosive charge in the shape of bird powered by several small rockets.

The device was first described in an ancient Chinese text from the 14th Century, The Firedrake Artillery Manual. Descriptions indicate that is was a model bird, complete with wings and tail, that could carry an explosive charge to devastate enemy troops and ships.

The ancient Chinese engineers powered the rocket using solid fuel gunpowder. A concept well ahead of its time. The loose gunpowder charge would later be ignited when the rocket reached its target.

It has long been the dream of ancient siege armies to attack well-defended cities from the sky. One potential example of ancient aerial weapons came from medieval England.

In a 700-year-old book, De Nobilitatibus, there lurks an old design for using a kite as an engine of war. The book was a coronation gift to the young King Edward the 3rd in 1327. This was the first depiction of a kite used for battle in Europe yet discovered.

The kite bomb consists of a large kite with streaming tail and what appears to be a bomb hanging from underneath it. Was this a bomb? If it was a bomb it is more than likely it would have been some form of an incendiary device. But could such a device have actually been practical?

Kite's are thought to have been used in war throughout the Far East. Substances like naphtha were also commonly used at this time in the Middle East. It is thought that the kite bomb could have been an idea carried back from the crusades to Medieval England. At least to the author of the book.

Mike Loades teamed up with Ancient Discoveries to find out if such a weapon was feasible. It seems it was possible. However, its use would have been highly dependant on the weather.

Archimedes, the Greek mathematician, engineer, inventor, and astronomer may have developed an ancient death ray. The weapon, sometimes called the 'Death Ray' was thought to have been developed to defend Syracuse from naval attack.

According to the second-century author Lucian and Anthemius of Tralles, the weapon was made of large reflectors. They were possibly polished bronze or copper and fashioned in such a way that they could focus sunlight onto approaching ships.

After a sustained assault from the ray, the ships should, if all went to plan, erupt into flames.

Of course, its existence is hotly debated by historians. Some tests of the concept have proven that the weapon would have been possible. In 1973, Greek scientists Ioannis Sakkas set up 70 polished metal shields.

There were pointed at a plywood model of a Roman warship some 50 meters away. Once the mirrors were correctly aligned the model ship burst into flames. Of course, this is merely a proof of concept, we may never know if this weapon was ever really used.

Mythbusters also had a go at recreating it but with some rather underwhelming results.

Our last example of ancient aerial weapons is one used to attempt to control the entire battlefield. Battlefields are noisy and confusing places for the common soldier. What was needed for the 2nd Century Chinese commanders, like Miedun, was a means of providing visual and auditory signals to troops.

Their solution was an ingenious one. Specialized screaming/whistling arrowheads. 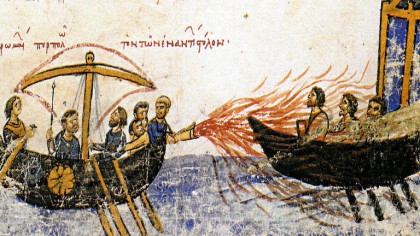 These arrowheads seemed very strange indeed. They are too big to travel very far and too blunt to be used to inflict series damage to targets. The heads were also rather bulbous and had strategically placed holes in them.

What could they be for?

It seems they were used by ancient Chinese battlefield commanders to coordinate their forces. Miedun, in particular, used them to indicate to his forces where to move or attack next.

They would also find use by Samurai as well as Chinese gangs until the end of the Warlord era.

So there you go. Some interesting ancient aerial weapons to rain death on the enemy. Granted some are not 'ancient' per se but they are all fascinating none the less. Do you have any examples you'd like to share? Feel free to comment below.