Deep Sleep Is Crucial to Cleaning the Brain, Finds Study

In order for the brain to clear out waste and toxic proteins it needs the right kind of sleep.

It is a well-known fact that sleep is crucial to our wellbeing both physically and psychologically. However, new research is uncovering that it may be more important than ever.

SEE ALSO: HOW FAR COULD YOU GO WITHOUT SLEEP AND WHAT WOULD IT BE LIKE?

Researchers at the University of Rochester Medical Center have released a new study that shows how the depth of sleep can affect our brain's crucial ability to clear waste and toxic proteins.

"Sleep is critical to the function of the brain's waste removal system and this study shows that the deeper the sleep the better," said Maiken Nedergaard, M.D., D.M.Sc., co-director of the Center for Translational Neuromedicine at the University of Rochester Medical Center (URMC) and lead author of the study.

"These findings also add to the increasingly clear evidence that quality of sleep or sleep deprivation can predict the onset of Alzheimer's and dementia."

The study essentially observed how sleep affected our glymphatic system. This system is the brain's functional waste clearance pathway. It basically removes waste from the brain and studies have found it primarily works while we sleep.

When we don't get enough sleep or enough of the right kind of deep sleep, toxic proteins such as beta-amyloid and tau accumulate. These proteins in the brain are associated with Alzheimer's disease. 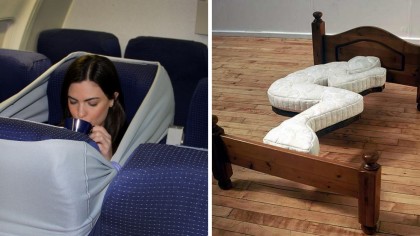 11 Of The Best/Worst Weird And Secretly Genius Sleep Gadgets

As such, many studies have made a connection between disrupted sleep and a heightened risk for Alzheimer's. In the new study, researchers followed mice that were put to sleep under different anesthesia regimes and tracked their brain electrical activity, cardiovascular activity, and the cleansing flow of cerebral spinal fluid CSF through the brain.

What they found was that the combination of drugs that most closely replicated deep non-REM sleep was the one that resulted in the most optimal functioning of the glymphatic system.

"The synchronized waves of neural activity during deep slow-wave sleep, specifically firing patterns that move from front of the brain to the back, coincide with what we know about the flow of CSF in the glymphatic system," said Lauren Hablitz, Ph.D., a postdoctoral associate in Nedergaard's lab and first author of the study.

"It appears that the chemicals involved in the firing of neurons, namely ions, drive a process of osmosis which helps pull the fluid through brain tissue."

The study makes the link between sleep, aging, and Alzheimer's disease more apparent. As we age, deep non-REM sleep becomes more difficult which means the function of the glymphatic system is likely affected.

In addition, the study also found that the mice that were put on anesthetics that did not induce slow brain activity saw diminished glymphatic activity. As such, the study also reveals classes of drugs that could be used in anesthesia for surgery in order to avoid this phenomenon.

"Cognitive impairment after anesthesia and surgery is a major problem," said Tuomas Lilius, M.D., Ph.D., with the Center for Translational Neuromedicine at the University of Copenhagen in Denmark and co-author of the study.

"A significant percentage of elderly patients that undergo surgery experience a postoperative period of delirium or have a new or worsened cognitive impairment at discharge."

The study is published in the journal of Science Advances.