Defects in Filter Speed Clean Up of Toxic Chemical in Water

Defects introduced into a special chemical filter greatly help in cleaning up a major toxic contaminant in groundwater.

Researchers looking to find a way to remove contaminants from industrial wastewater have come up with a counter-intuitive solution: use a defective filter.

Researchers at Rice University in Texas have revealed a new kind of filter for soaking up contaminants from industrial wastewater that isn’t nearly as perfect as previous filters, and that’s the point.

In a new paper published in the American Chemical Society’s journal ACS Sustainable Chemistry and Engineering, Michael Wong, Chelsea Clark, and their team at Rice University have shown that when it comes to soaking up perfluorooctanesulfonic acid (PFOS), non-porous aren’t always better.

They developed a new kind of highly-porous nanomaterial filter that they called a metal-organic framework (MOF) that soaked up PFOS from polluted water faster than other filters. What’s more, when they introduced nanometer-sized holes—normally thought of as defects—into the material, they found that the MOF could hold even more PFOS than before.

“We are taking a step in the right direction toward developing materials that can effectively treat industrial wastewaters in the parts-per-billion and parts-per-million level of total PFAS contamination, which is very difficult to do using current technologies like granular activated carbon or activated sludge-based systems,” said Wong, Professor of Chemistry and chair of Rice’s Department of Chemical and Biomolecular Engineering.

PFOS is a common contaminant found in industrial processing and has been used in consumer products for decades as a stain-resisting compound added to fabrics, carpeting, etc. It has been shown to be toxic in humans, the most widely known member of a family of toxic chemicals called per- and polyfluoroalkyl substances (PFAS).

It has been restricted by the US Environmental Protection Agency, which describes PFAS as “very persistent in the environment and in the human body — meaning they don’t break down and they can accumulate over time,” and PFOS has been the subject of several major lawsuits in the United States.

MOFs, according to Wong, are three-dimensional structures made of metal ions and organic molecules that can self-assemble once the metal ions begin to interact with the organic compounds. 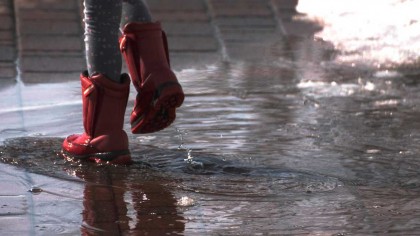 They can develop into sophisticated structures that are highly porous but had shown promise in filtering other chemicals, so Wong believed MOFs would be a good candidate for PFOS remediation.

Particularly, MOFs have proven to be highly effective in capturing specific target molecules and can hold them in significant amounts. A single gram of some MOFs, for example, can have more surface area than a football field.

More importantly, the structure, pore sizes, and functions of a MOF can be altered by chemists during synthesis, allowing for more precise targeting of specific pollutants.

This was the process that Clark used to introduce more absorbent properties into a well-documented MOF known as UiO-66. By varying the amount of hydrochloric acid during synthesis, she added the “defects” to the PFOS filter that proved to be so effective at absorbing the dangerous contaminant.

“The large-pore defects are essentially their own sites for PFAS adsorption via hydrophobic interactions,” said Clark. “They improve the adsorption behavior by increasing the space for the PFAS molecules.”

SpaceX to Offer High-Speed Internet from Space to Rural Canada

Industrial Activity is Draining the World of Fresh Water