Though Devel 16 has yet to hit the road, the tests of the supercar's massive engine have proven to be shocking.

Dubai’s motor company Devel just unveiled the production version of their much-anticipated 5,000-horsepower, V16 engine car capable of speeds over 300 mph. As one of the fastest racing cars in the world, it did not disappoint.

Debuted at the 2017 Dubai Motor Show, the Devel Sixteen is still in development courtesy of Italy’s Manifattura Automobili Torino (MAT), the same company that built China’s Apollo on the Intensa Emozione and Arrow supercars and with America’s Scuderia Cameron Glickenhaus on the SCG003.

The goal of the power auto was to break all production records with a new level of performance, and its creators say that the Devel 16 will hit 300mph when it begins the testing phase. So far the latest car to shock the world is the Koenigsegg Agera RS which is the current record holder with 277.9 mph but unlike Sixteen’s 5,000 bhp (brake horsepower) claim, the RS only boasts 1,360bhp.

Such a claim is not merely optimism, Devel subcontractor Steve Morris Engines released a video earlier this month showing Sixteen’s massive 12.3-liter, V16 quad-turbo engine producing 5,007bhp on the company dynamometer. Despite this shocking test, it has yet to hit the road.

Speaking from the Dubai Motor Show, Devel developer Rashid Al-Attari told CNN he expects the hypercar to be completed "in the next 12-18 months," including testing.

Al-Attari also added to the news agency that one boundary they are currently facing in development is the question of a tire supplier. There are no “street legal” tires out there that can withstand such speeds. However, Al-Attari is looking at two air manufacturers though chose not to mention their names.

He also said that the supercar, inspired by a jet fighter, is “more of a dragster” considering its speed of 5,000bhp, low wheelbase, and sleek, long body. In time, Devel has plans to create road versions of Devel Sixteen, powered by a 2,000bhp V8 and the other a V16 quad turbo engine with 3,000bhp. 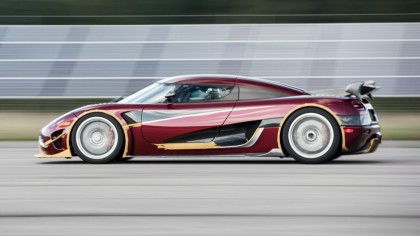 When asked what he required from his supercar, Al-Attari told CNN he "wanted the horsepower and a car that is really spacious.”

The launch of this wildly fast yet spacious car won’t happen in its home base of Dubai, rather the first ever fully-functional model will debut in internationally, "the US, the UK, Germany... it could be anywhere,” Al-Attari said.

The other prototype debuted at the motor show in the Arab emirate was what YouTuber Shmee150 described as “something out of RoboCop.” The six-wheeler, tank-like concept vehicle opens up like a private jet and is made from either carbon or fiberglass. Those who had the opportunity to drive it on track gave it super reviews; as expected from a supercar. Just watch this video!

“It kind of rivals a Mercedes 6x6,” said Shmee150 in a video he posted of the event. It also has a suspension system that allows it to fit under low overhangs and a 6.7-liter turbodiesel V8 producing 720 hp and 1,000 Nm of torque.