Microsoft Cloud Artificial Intelligence Challenge helps developers create an application that notifies seismologists on earthquake occurrence, to hopefully assist those most affected by the natural disasters.

Researchers and developers at the Aristotle University of Thessaloniki (AUTh), in Greece, have developed, with the help of Microsoft Azure, Earthquake Notifications, an application that uses Artificial Intelligence (AI) to predict earthquakes.

The team, including George Spyrou, Senior Software Engineer; Parthena (Popi) Paradisopoulou, PhD in Seismology; Despoina Kementzetzidou, PhD in Geophysics; Areti Panou, PhD in Seismology; and Panagiotis Dimitrakopoulos, student at the Department of Computer Science and Engineering researched and developed the application that notifies researchers at AUTh when a strong earthquake occurs.

The template of the notification message in the English language can be viewed here.

Seismological observatory at the Aristotle University of Thessaloniki

In 2017, the AUTh Seismologic Observatory personnel analyzed 9,208 earthquake events. For strong earthquakes, it is paramount that seismologists analyze the information in real-time. 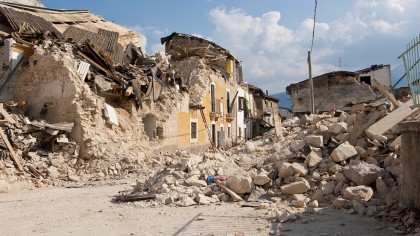 The role of the application is to make decisions whether an earthquake event is important and notify the Seismological station personnel via a phone call as fast as possible.

"This application is not used for predicting earthquakes but it is simply an internal tool to notify seismologists after an event has occurred," George Spyrou explained.

"The application contributes to the 24/7 routine earthquake analysis at the Seismological observatory at the Aristotle University of Thessaloniki, in Greece," George Spyrou told Interesting Engineering.

The seismological observatory was founded in 1978, after the devastating 6.5 magnitude earthquake that occurred in this area. This year, on the 40th anniversary of the 1978 earthquake, experts have issued a new warning predicting a similar or greater magnitud earthquake in Thessaloniki could potentially cause damage of more than 20 billion euros.

The seismic network started its operations in 1981. It was the first seismic network that was installed in the Balkan area. Today, the seismic network is recognized for its quality and great improvement. It has been part of the Hellenic Unified Seismological Network (H.U.S.N.) since 2006.

All institutes in Greece exchange real-time seismological data. To evaluate earthquake danger there was a need for a scientific rapid determination of the location of earthquakes and the accurate calculation of magnitudes.

According to the developers, the Seismological Observatory of AUTh sends the automatic locations of earthquake events to the European Mediterranean Seismic Center (EMSC). The EMSC acts as an aggregator of seismological data and publishes this data to the public via the WebSocket protocol.

A simple client written in Python is connected to this service and monitors for earthquake events from the AUTh Seismological Observatory network. In case the Python client receives an event with Magnitude M≥3 then it sends this message to Azure Queue Storage.

According to the developer, the notifications' functionality was developed using Azure Storage and Azure Functions, and for the voice notifications, they used Microsoft Cognitive Services and Twilio.

The list of all the notifications can be displayed for future reference by the Seismological Observatory’s Personnel.

Since this application is intended to be used within the Seismological Observatory of AUTh the notifications are in the Greek language.

In the future, the developers expect to include phone notifications in multiple languages starting with English, Chinese, and Japanese using Microsoft Cognitive Services. It is also going to be possible for public users to subscribe and receive voice notifications using geographical criteria, George Spyrou told Interesting Engineering.

The Earthquake Notifications application developed by AUTh won the Third Prize in the Microsoft Cloud AI Research Challenge. The participating projects had to show how Microsoft AI services are used to solve a difficult problem and provide insightful, practical, useful solutions. The complete list of winners can be found here.

In order to develop the application, the Aristotle University of Thessaloniki's team used Azure Machine Learning, an intelligent system using data and the Microsoft AI platform, which features the latest advancement in AI development on Azure, George Spyrou explained.

5 Woodworking Hacks to Save Ton of Effort Around the Workshop