Originally proposed in 1873, the cogwheel railway had a suggested 1,435 standard gauge and 25 percent maximum gradient. The proposal was rejected at the time for not being economically viable. Enter Colonel Eduard Locher, an experienced practical engineer of the age, devised a unique solution allowing for a maximal gradient of 48 percent, effectively cutting the route length in half. 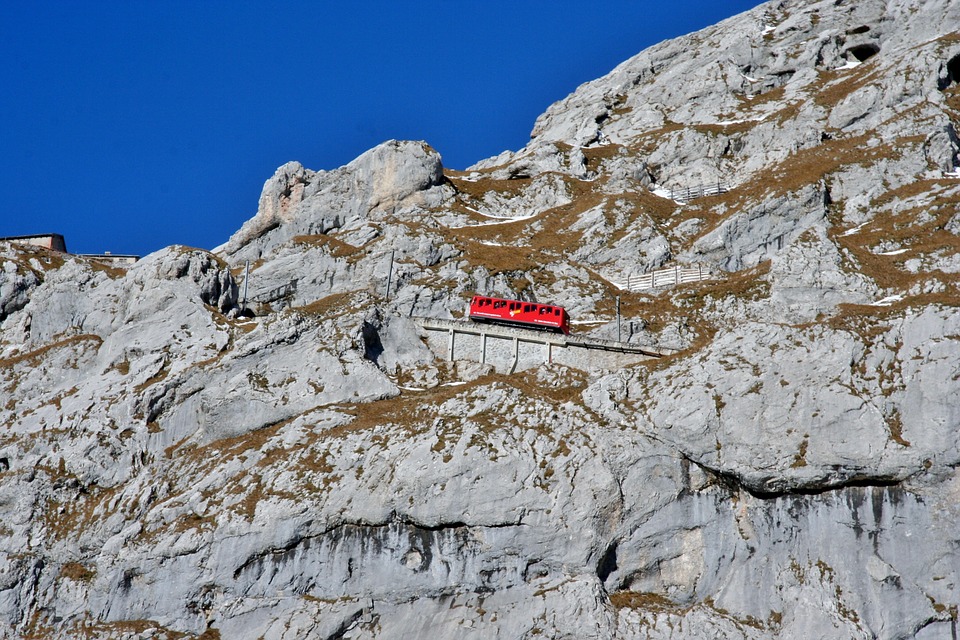 Colonel Eduard Locher-Freuler was born in Zurich in 1840. Many considered him a visionary during his life. His new rack system design for the Pilatus Cogwheel railway meant the track gauge was reduced to 80 centimeters and had tightened bend radii. His design allowed the route of the 4.2-kilometre railway to cope with gradients up to 48 percent.

Locher actually collaborated with his brother-in-law Eduard-Guyer-Frueler during throughout 1883 and 1884. This design received permission for construction on June 28, 1885.

After receiving permission from authorities and property owners, Locher and his brother-in-law submitted final plans for the cogwheel's design in December 1885 to the public. On March 29, 1886, the Pilatus-Railway-Company, with a share capital of 2 million francs and 850,000 francs stock capital, held its first general meeting in the Hotel du Lac at Lucerne. In the first days of April 1886, construction began.

Trial runs on the first completed section successfully proved the design. Locher's team consisted of around 200 Swiss workmen and around 600 Italian contractors.

On completion of the Pilatus cogwheel railway, Locher turned his hand to various bridge projects including on the Gotthard Massif. He also embarked on pioneering tunnel projects in Switzerland. His innovative design at Pilatus wasn't adopted anywhere else in the world, making it not only unique but a labor of love for maintenance engineers. 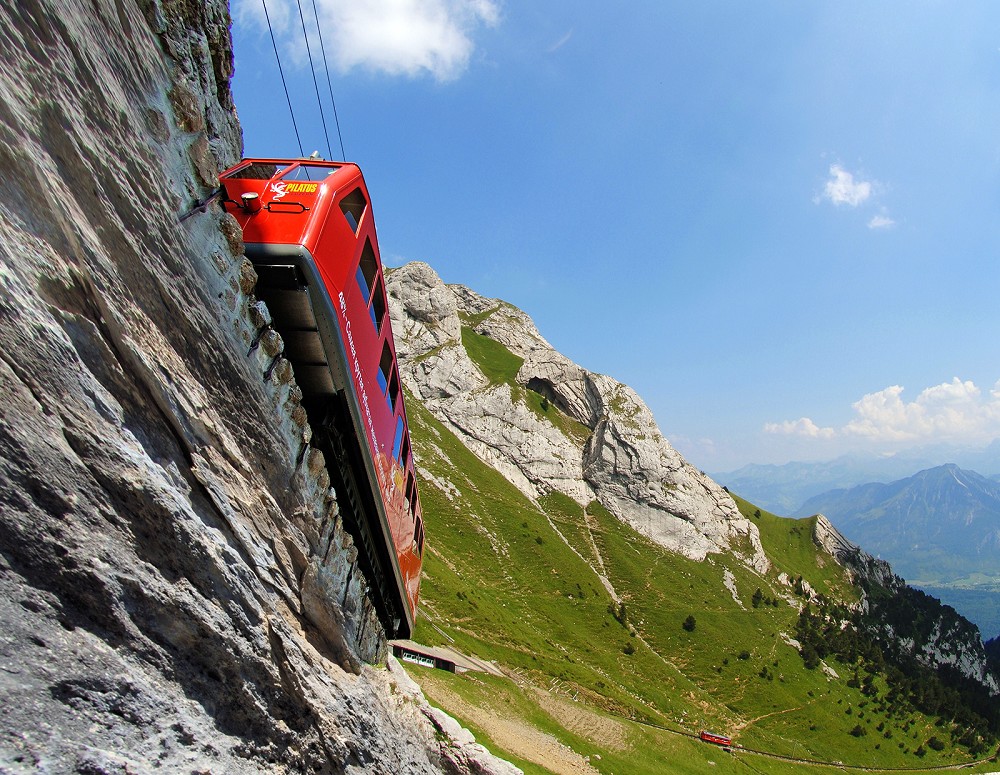 Conventional systems at this time were unable to handle gradients as steep as Locher's design due to mechanical limitations on the vertical cogwheel systems common at the time. This was due to the fact that under higher gradients, the vertical cogwheel pressing against the rack from above could jump out of engagement, eliminating the train's main drive and breaking force - not ideal.

Locher's solution placed a horizontal double rack between the rails with the rack teeth facing each side. This allowed two cogwheels to be engaged on the central rack, carried on vertical shafts under the train car.

This novel design eliminated the possibility of cogwheel/rack disengagement and added the additional benefit of preventing the car from toppling over under severe cross winds common to the area. This system also allowed train car guiding without the need for flanges on the wheels.

Under the Locher Rack System, gear teeth are cut in sideways rather than on top of the guiding rail. Two cogwheels engage the teeth underneath the locomotive.

Locher set out to design a system that could handle gradients as steep as 1 in 2. The most common system at the time was the Abt system, an example of which is used on Mount Snowden, Wales. This system has a limited gradient of 1 in 4 (around 25 percent). Locher showed that under steeper gradients the Abt system was prone to driving pinion over-riding the rack. This was, understandably, thought to potentially lead to catastrophic derailments.

Locher's visionary design sought to overcome this with the dual tooth and cogwheel solution. This allowed, in theory, the locomotive to tackle the steep slopes of Mount Pilatus.

The design was not without issues, however, standard railway switches were not viable with this system. Transfer cables and other complex devices would be needed for branching lines on the track.

Following tests, the Locher system was deployed on the Pilatus Railway, which opened in 1889. No other public railway uses the Locher system, although some European coal mines use a similar system on steeply graded underground lines.

You've got the power

The first cars on Pilatus lacked wheel flanges, but they were later installed to allow for easier maintenance. The line opened on June 4, 1889 using a steam traction engine to power the system.

The original steam-powered train cars could carry 32 passengers and average around 3 to 4 kilometers per hour. At this rate, they took just over an hour to complete the ascent.

During the steam-traction engine's heyday, passenger numbers rose from 30,000 to 55,000 a year. During the 1930s, the eleven combined steam locomotives and coaches could no longer keep up with the rise in demand. The current engines and coaches were also beginning to reach the end of their useful working lives. To rectify this, electrification was considered as far back as 1905. The technology was then in its infancy and costs for conversion proved prohibitive. Electrification was finally implemented on May 15, 1937, using an overhead supply of 1550V DC.

Today's electrified cars can accommodate 40 passengers and run at around 9km/h. This cuts the transit time in half to about 30 minutes. The system today still uses the original rack rails which are now over 100 years old - not bad. While friction has worn them over the years it has been discovered that this can be "fixed" by simply turning them over to provide a new wearing surface that should suffice for the next 100 years.

The cogwheel railway operates between May and November, basically when the tracks aren't buried under snow. Trains depart every 45 minutes during the day. If you really have to get to the summit of Mount Pilatus during Winter there is a cable car to get you there.