Scientists at the University of Cambridge have discovered the smallest star ever. The star is comparable to size and radius to that of Saturn and located 600 light years away from Earth. 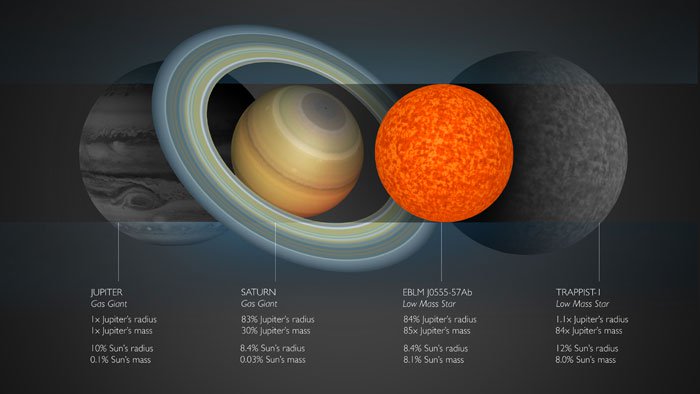 The smallest star, named as EBLM J0555-57Ab, identified as following a binary star system –a system of two stars revolving around a common center. Scientists confirmed the discovery of this star after correlating photo electric signals from WASP (Wide Angle Search for Planets) and analyzing data of radial velocities from CORALIE and light curves with the Euler and TRAPPIST telescopes.

"Had this star formed with only a slightly lower mass, the fusion reaction of hydrogen in its core could not be sustained, and the star would instead have transformed into a brown dwarf" said Alexander von Boetticher, University of Cambridge, UK, who is the lead author of the team of scientists. He further added, “Our research reveals how small star can be”.

Initially, the team had not recognized it as a star until it is observed passing the larger star. Such stars are generally identified when the radiance of a larger star blocked and dipped due to smaller one. Another team member and co-author, Amaury Triaud said, “It’s like trying to find a candle beside a light house”, underlying the challenges of identifying smaller planets or stars that are 20% lesser in size of the Sun. To prove his theory right, the tiny star discovered is 2000-3000 times dimmer than Sun.

“The smallest stars provide optimal conditions for the discovery of Earth-like planets, and for the remote exploration of their atmospheres,” said Amaury Triaud. He further added, “However, before we can study planets, we absolutely need to understand their star; this is fundamental”.

The smallest star could have liquid water on its surface

Exoplanets orbiting outside the Solar system are usually rocky and gaseous in nature. The equipment used for star hunting is sufficient to identify exoplanets in the cosmos. So far, NASA has discovered more than 2000 exoplanets in 20 years. To determine the properties of exoplanets, like stellar mass, accurate knowledge of their host star parameters are essential.

However, this smallest star appears to be ultra-cool and it can possess liquid water on its surface. Such stars generally tend to be brown dwarfs, sometimes referred as failed stars. Unlike dwarfs, this smallest star is active to fuse Hydrogen in its core to form Helium. Formation of Helium produces a perpetual source of energy for the planet, like the chain reaction in the Thermonuclear fusion bomb.

With mass equivalent to that of TRAPPIST-1 and 85% of Jupiter, the smallest star possesses gravitational pull 300 times more than Earth. The mass is measured with the Doppler Wobble method, using data from CORALIE spectrograph. TRAPPIST-1 is an ultra-cool dwarf, slightly heavier than Jupiter and located 39 light years away from Sun. The recent discovery motivates scientists and astronomers to find water bodies and livelihood on the smallest star.

SEE ALSO: Scientists Successfully Teleport a Photon from Earth to Space for the First Time in History