The discovery of boron on the planet Mars has come as a research boon for scientists and will answer a host of questions about life on the planet.

With the release of findings based on previously gathered images of boron found on Mars, scientists possess new evidence that confirms theories that there may be life on the red planet. In addition, a number of clues about pre-existing life could be answered as well.

The exciting information was published just one day before in the physics journal Geophysical Research Letters.

In the images relayed back to Earth in late 2016, one can see white flecks of calcium sulfate throughout the ground, which fills in many gaps about determining a timeline for life evolving on Mars.

Research fellow Patrick Gasda of the New Mexico-based Los Alamos National Laboratory elaborates on the significance of the discovery:

"Because borates may play an important role in making RNA—one of the building blocks of life—finding boron on Mars further opens the possibility that life could have once arisen on the planet," adding, "Borates are one possible bridge from simple organic molecules to RNA. Without RNA, you have no life. The presence of boron tells us that, if organics were present on Mars, these chemical reactions could have occurred." 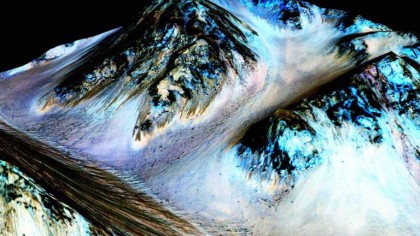 RNA, or ribonucleic acid, is an important nucleic acid essential for protein synthesis. What’s more significant is that the discovery of the borates in an underground source, in the groundwater, is more supporting evidence for life on the planet, as well as offering a clearer timeline about the evolution of life on both our planet and Mars. One of the main questions arising is whether the RNA found on Mars gave rise to the DNA found on Earth, so establishing causality is essential for scientists.

"We detected borates in a crater on Mars that's 3.8 billion years old, younger than the likely formation of life on Earth," continues Gasda. "Essentially, this tells us that the conditions from which life could have potentially grown may have existed on ancient Mars, independent from Earth."

What Is the Significance for the Human Species?

As part of the human species, there is an important distinction we should make between evidence of life on Mars, and evidence of the ability to support life on Mars. A NASA mission revealed silica deposits, evidence of ancient life on the planet. We will have to patiently wait to see what implications the findings of the last few years will have for humankind.

There are still many unanswered questions, and we should not all get too optimistic just yet about inhabiting the planet in the near future, but this discovery opens many important doors for future research.