Disney Research has been hard at work developing a prototype of a unique haptics-supported fireworks display experience specially tailored to visually impaired users.

Fireworks provide dazzling night displays that people all around the world continue to enjoy. Although a number of technical improvements have been introduced to pyrotechnics over the years, the result remains the same: a magical and intense light display that awes outdoor audiences. However distinctive the boom that signals the beginning of fireworks may be, the thrill of enjoying the makes up most of the experience.

And no one does fireworks like Disney parks and resorts.

For this reason, Disney Research is currently developing a kind of tactile pyrotechnic display called “Feeling Fireworks”, which is designed specifically for visually impaired visitors, the idea being to offer “an aesthetic technology for the blind and visually impaired community,” explains lead research scientist Paul Beardsley. The prototype works with haptic feedback, which essentially involves a series of tactile vibrations that translate the experience.

Another benefit is that the solution is relatively cost-effective, as it employs water jets from behind the display. In order to make the experience even more interactive, a Microsoft Kinect camera array is able to follow the user’s movements. The latex screen where the images are transmitted measures about 0.9 meters x 0.9 meters. An Arduino computer is responsible for controlling the timing and levels of the water jet spray, drawing out images of the shapes on the screen so that users can feel them through the surface. The same image is matched from the front by a projector, creating a 3D effect.

A round of testing has been completed with 18 sighted participants, and the results showed a 66 percent success rate. Researchers are very encouraged by the results, though they offered no specifics about when the technology would be introduced at Disney Parks globally, nor were there specific feasibility issues addressed in terms of how the design would be integrated into the overall layout of the parks. Still, the efforts are a big step in the right direction.

Beardsley does specify some additional applications for the technology, explaining that the fact that “‘deaf people hold balloons to amplify vibrations’ suggests that the screen might also be a basis for a tactile-visual musical experience for the deaf community.”

Lechal has guided explorers like him to find their way back even without a data connection. Know more at https://t.co/UBGmeZM3rO pic.twitter.com/sMBCXCHKA9

Haptics technology has been on the forefront in terms of assisting visually impaired people and adding to the richness of their experiences, and there are even shoes that vibrate to guide the feet of runners “invisibly but intuitively”. This is the first time, however, that there has been research carried out to for the specific purpose of merging haptics and fireworks displays. 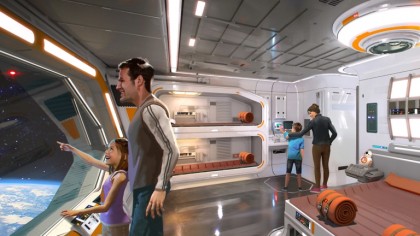 As Disney continues to take more steps to find creative solutions—with the use of new technology—for ensuring the most inclusive experience possible for all the visitors to its parks, we look forward to hearing about even bigger and more innovative designs in the future.