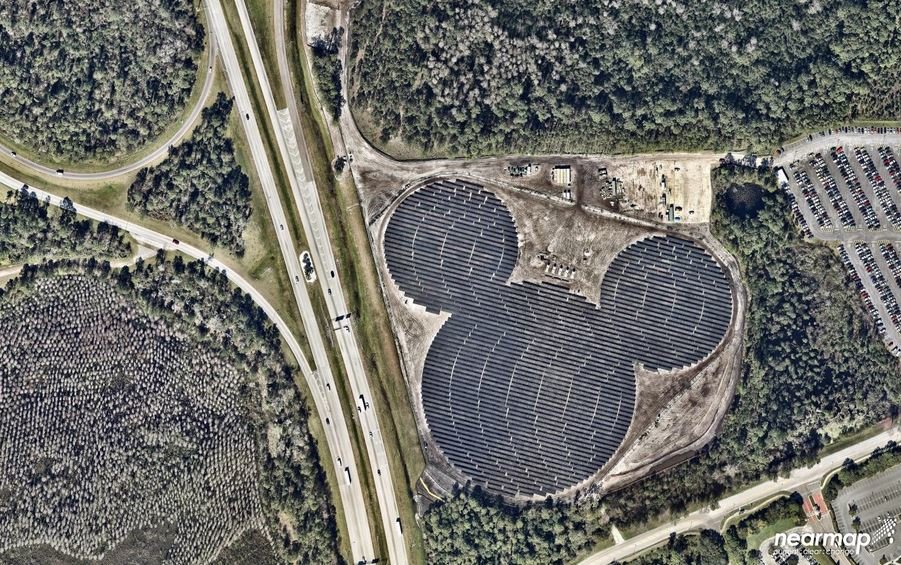 With the help of Duke Energy and Reedy Creek Improvement District (RCID) the popular US resort of Walt Disney World has established a solar farm shaped like Mickey Mouse. Representatives from all three organizations were present at an opening ceremony on April 12th this year, when the facility, constructed by Duke Energy Florida, was officially switched on at Epcot, one of four theme parks operated by the company in Bay Lake, Orlando. Duke Energy first announced its intention to construct the solar farm in May 2015, mentioning that it would take the shape of a Disney character but without stating specifically which one.

The 5 MW solar farm consists of 48,000 solar panels and covers 22 acres. It is capable of generating enough energy to supply 820 homes, although it is mainly intended to power the resort itself along with a number of nearby hotels. The electricity generated by the panels will be used by RCID which manages the site, via a 15-year power purchase agreement.

The solar farm is the largest investment by the Epcot park to date, although the company has been engaged in renewable energy development since 1982 when it installed solar panels on the roof of the resort’s Universe of Energy building. It forms part of Walt Disney World’s plant to reduce the resort’s carbon footprint by 50 percent by 2020. Last year, Disney reported that it had managed to cut its carbon footprint by 34 percent from 2012 levels. It also operates the trains at the resort using a fuel mixture that includes biodiesel sourced from waste cooking oil obtained from the resort’s restaurants and hotels and uses food scraps to generate electricity and produce fertilizer.

Duke Energy is mostly known for its fossil fuel plants, although in recent years it has begun to venture into renewable energy also. The firm operates a number of coal and natural gas plants across the country but has intentions to construct 500 MW of solar across Florida by 2024. To some extent, the transition has been forced upon the company as coal becomes less and less attractive, an eventuality that was impressed firmly on the country earlier this month after it had to plead guilty to several violations of the US Clean Water Act for polluting rivers with coal ash from five of its plants in North Carolina. Elsewhere, the company is retiring some of its older coal plants with one of them due to be replaced by a battery energy storage facility to be constructed in association with LG Chem and Greensmith. The final coal plant at the site in New Richmond, Ohio, was shut down in September 2014 and a 2 MW storage system is already in operation.

Duke is likely to move even further in the direction of renewables as the global momentum towards clean energy continues. It currently has more than $8 million invested in solar PV installations at about 50 schools and universities in the state which, in addition to generating electricity, also help to educate students about future energy projects.