The number of preoccupied employees crashing into the glass walls at Apple Park are increasing.

There seems to be one way that Apple, Inc. is creating more problems than solutions for its employees.

The company’s headquarters in Cupertino, California—Apple Park—8 years in the making, is arguably one of Apple visionary Steve Jobs’ last significant contributions to the company which he poured so much time and energy into while at the helm as Chief Executive Officer (CEO).

13.7-meter high glass panes are positioned throughout the large and imposing circular space, making the space a marvel of architecture and a seamless and well-executed creation of a workspace that encourages an open exchange of ideas and a relaxed and collaborative atmosphere.

Since the time that the 175-acre campus that houses 12,000 people was opened, one unplanned consequence became apparent, almost from the beginning: many people were walking into the glass, and it was not isolated to any particular part of the building, any department, or any specific time of day. Some unidentified employees even began adding sticky notes to some of the glass panes to cut down on collisions.

Apple Chief Design Officer (CDO) Johnathon Ive, who oversaw the project, spoke at length about the philosophy behind the choice to use the imposing glass panes: “It’s frustrating to talk about this building in terms of absurd, large numbers,” he said around the time of the opening. “It makes for an impressive statistic, but you don’t live in an impressive statistic. While it is a technical marvel to make glass at this scale, that’s not the achievement. The achievement is to make a building where so many people can connect and collaborate and walk and talk.”

No doubt, there has been a rise in the last year of Apple employees taking to the blogs to complain that Apple, while attempting to remove the glass ceiling for its female employees, replaced them with glass windows. Sadly, and much to the disappointment of dozens of bloggers, Apple has released little, if any, video footage of the unfortunate, yet hilarious, office collisions. 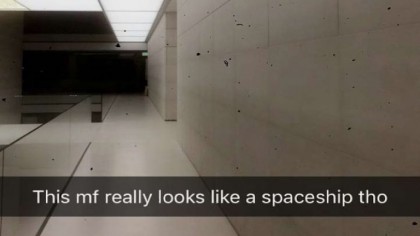 Putting aside all images that spring to mind about accident-prone clutzes in romantic comedies, or the swarms of people who crash into parked cars (and moving cars), lampposts, doors or even walk off the edge of the sidewalk because they are distracted while sending a quick or lengthy message, it begs the question: is this a serious problem at Apple, or merely a serious source of comic relief? We tend to believe that it’s definitely more of column B than column A. What we have here, essentially, is a case of the pitfalls of modern life in the outside world on a smaller scale. It almost feels like a case study on walking while texting.

Perhaps the most ironic (and irresistibly pun-worthy) statement comes from Apple Vice President of Environment, Policy and Social Initiatives Lisa Jackson. Although she said it's about the building’s design concept that uses a heating and cooling mechanism that allows it to reflect outside weather conditions more realistically, it seems to apply to this unfortunate situation perfectly: “That was Steve’s original intention, to sort of blur that line between the inside and the outside,” adding… “It sort of wakes up your senses.”