Genuine happiness is often the result of small and unsolicited deeds. Just like this simple, made-up barrel train from the Punmu community in Western Australia. This humble transit system takes children to and from the community's local school.


Kids look forward to riding the barrel train every day

The primary role of the barrel train is to encourage the children of the Punmu community to go to school on time. Punmu's local school has around 40 students, where levels range from pre-kindergarten to Year 12. One of the other goals of the school is to keep the kids in school throughout the day. According to the school's principal, Sarah Mortimer, attendance is one thing, but arriving early to school makes a difference.

"One of the challenges is getting the kids to school early and getting them to stay all day. You can say a child has 100 per cent attendance because they're coming every day to school, but if they come at 10 o'clock that's different to coming at 8 o'clock".

The barren train definitely uplifts the whole community, especially families who have kids that go to school.

"It's something positive, it's something safe and it makes it much easier for families that have younger children at home", added Mortimer.

The whole idea of the barrel train was initiated by Punmu coordinator John Reudavey as he was visiting Perth.

"I saw four drums being towed behind a ride-on mower and the parents were paying $2 for the kids to putt around the footy oval, and I just thought 'What an awesome idea', said Reudavey. 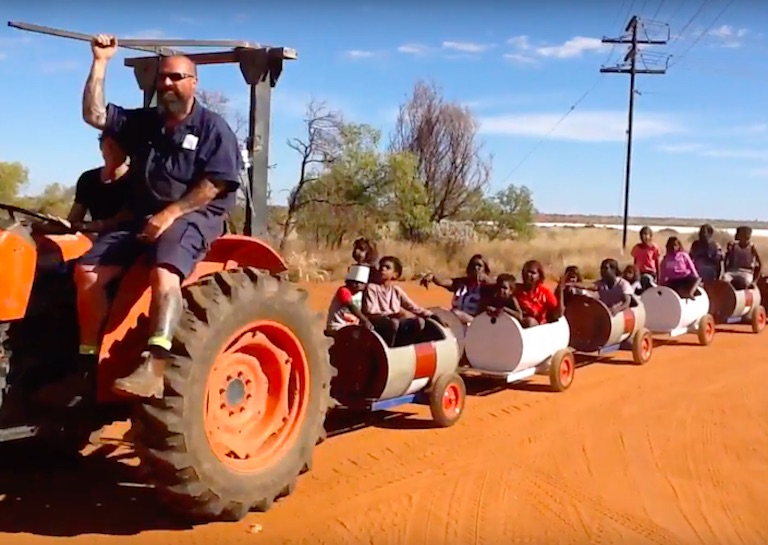 Due to the desert environment of Punmu, the barrel train had to be customized to withstand the rough red dirt and spinifex it has to drive through. One of the biggest motivation of Reudavey is the eagerness of the children who look forward to riding the barrel train.

"In the morning it's freezing cold, but to see three or four kids at each house standing out on the road shivering and waiting for the train to come past was an awesome sight", Ruedavey noted.

The Punmu community made the barrel train from more than 20 metal drums. They mounted the drums onto metal framings with wheels and linked them all together to form a 24-seater desert transit. The linked barrels are attached to a front tractor, which drives the whole system around.

Punmu is considered to be one of the most isolated communities in Australia. The Aboriginal community was established in 1981 and currently has a population of an estimated 180 Martu people. Since its establishment, the community has consistently developed with the building of new houses, a general store, a community office, and other local amenities. The remote community is also a popular tourist spot for travelers because of its stunning natural sites.

The Martu people decided to establish the community in the middle of the red plane so they can return to their traditional land. One of their main objectives is to keep the community intact, free from toxic influences such as alcohol, petrol sniffing, and drugs.